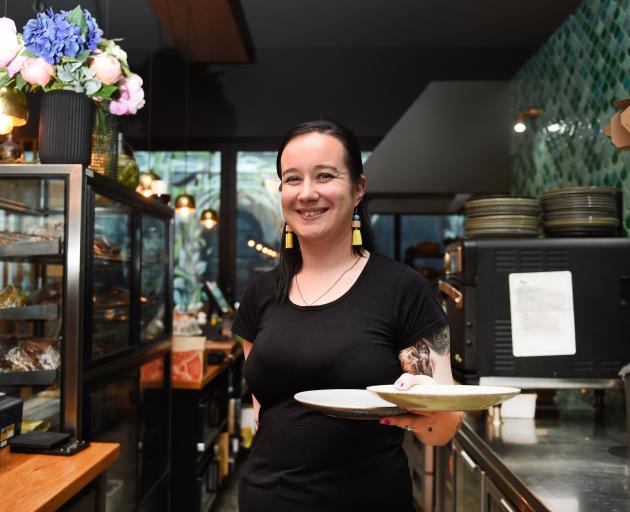 Bethany Bates at Heritage Coffee, which is working with Doubt Not to reduce and reuse their food waste. Photo: Gregor Richardson
What are the options available for businesses to divert their food waste from the landfill? Maureen Howard talks to one Dunedin enterprise that isn't waiting for a kerbside collection scheme.

By connecting trees with cafes, "we're just trying to solve that issue of making sure organic waste doesn't end up in landfill", says Isaac Davies, co-owner of the social enterprise Doubt Not.

Doubt Not is coming to the rescue of cafes, restaurants and coffee roasteries across Dunedin. Begun mid last year and growing by two to three cafes per week, the business now takes uncooked food waste from 34 businesses in the hospitality industry. Davies and co-owner Pete Ryan are determined to keep as much food waste as they can out of Dunedin's landfills - and to use the compost generated to grow trees and other plants. There is no charge to participating businesses; instead "we are trying to supplement it by starting a tree industry from the compost", Davies says.

Davies and Ryan started Doubt Not with the goal of increasing their compost supply for trees they are growing to sell as part of the One Billion Trees Programme. They have focused on the hospitality industry because they know the extent of the food-waste problem there. Both men work full time in hospitality and have done so for the past 10-15 years.

One cafe that benefits from Doubt Not is Heritage Coffee, a cafe and eatery in the warehouse precinct in Dunedin.

"It's going really, really well actually. There is not much waste going in the rubbish bin anymore because anything that can be recycled gets recycled," staff member Bethany Bates says. 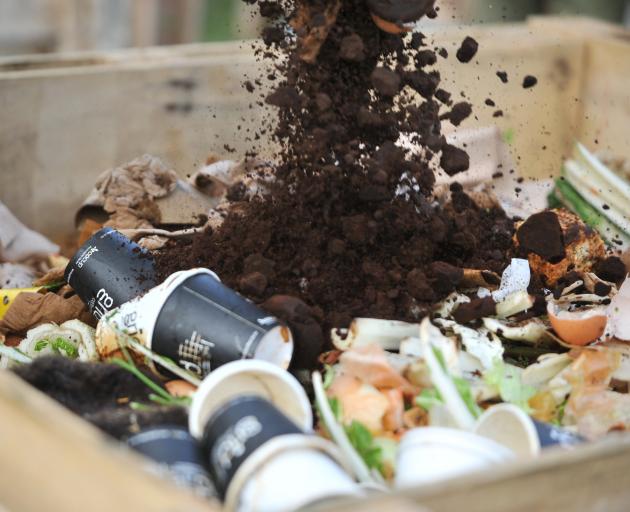 Coffee grounds, compostable coffee cups and food scraps are poured into one of Doubt Not's compost bins. Photo: Christine O'Connor
Doubt Not takes more than just uncooked food waste. To balance the high nitrogen from the food waste, it also incorporates carbon in the form of paper, cardboard packaging and coffee husks into the compost pile. Even its trees are propagated in containers obtained from the waste of the businesses it serves. Coffee bags, cups, salad containers: "Nothing we use is a bought product. Everything we use is a waste product," Davies says.

Doubt Not is a fine example of recycle and reuse, but - as the mantra goes - reduce is the first priority. Catherine Irvine, senior strategy and policy officer at the Dunedin City Council, recommends that businesses initially start at the "front end" and do an in-house audit by weighing how much food they are wasting.

"I've worked with businesses in the past where they have done that and they have just not realised that they were just purchasing too much and making their serving size too big. Once you've measured it you know what you are dealing with."

Audit done, Irvine recommends initiatives such as Doubt Not and Kiwi Harvest, which rescues good-quality food waste for people in need, as well as the Love Food Hate Waste website, for information.

Under the Waste Futures banner, the DCC has recently initiated a review process to consider introducing kerbside collection of household organic waste.

It is too soon to say whether business food waste will be included, Irvine says.

Along with grassroots enterprises such as Doubt Not, the council's Waste Futures projects aspire to reduce Dunedin's waste to landfill to as close to zero as possible. Public submissions will be called for on the proposed kerbside waste collection service later this year.

"We are going to go out loud when we have some options to put in front of people," Irvine says.

Composting at your workplace

To get started, research your composting options and convince the decision-makers of the benefits, such as improved staff morale and reduced landfill costs. Equally, it's important to get everyone involved and on board by engaging them at the outset.

Perform a waste audit to help you work out how big a system your office needs, and do it again later to measure progress and share successes. Embed the philosophy of composting into your workplace so that you aren't the only compost champion on your floor.

Two popular options for the workplace and home are bokashi composting and vermi-composting.

The bokashi composting bucket system comprises double buckets with a tightly sealing lid. The top bucket has holes in the base to allow any liquids through. Zing (dried sawdust, molasses and bran impregnated with micro-organisms) is added to the food placed in the top bucket. Once "pickled", the food can be dug into soil or into an outdoor compost.

The liquid when diluted is an excellent supplement for growing plants or a "health tonic" for drains.

Will take almost everything, including meat and cheese.

The liquid must be removed at least twice weekly to avoid any odours.

Office vermi-composting systems come in indoor and outdoor options and vary in utility and charm. A two or three-tier system is common to accommodate food scraps, the "compost" worms, the worm bed and castings, with a tap below to collect liquid.

The liquid and vermi-compost are sought after by gardeners. Mixed into soil they promote moisture retention and micro-organism innoculants and add nutrients.

There are many types of bins to choose from (indoor and outdoor), or make your own.

Large container can be heavy.

Not everyone likes worms.

Worms do not relish eating all foods equally.