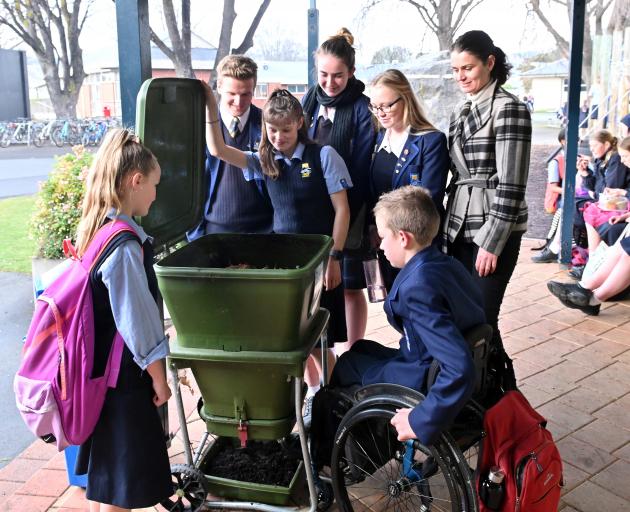 Taieri College envirogroup members inspecting one of their worm farms at the school are (clockwise from left) Gemma Lloyd (11), Josh Scott (16), Haylee Morton (12), Macy Bisset (17), Katrina McHale (17), teacher Georgina King and Dylan Lloyd (15). Photos: Linda Robertson
As school pupils around the world protest for a liveable climate, what role are educators playing to equip children with the perspectives and skills they will need to create an ecologically sustainable future? Maureen Howard finds out what education for sustainability has to offer.

Tucked against a backdrop of natural bush, the grounds of St Leonard's Primary School on the west side of Otago Harbour are rich in natural assets.

To appreciate its treasures, the pupils of this Green-Gold Enviroschool are focusing on a flora and fauna project for the rest of the year.

"The aim is to protect the native flora and fauna in our area," principal Jo Wilson says.

For an hour, three days a week, the children immerse themselves in the lives of the wild creatures that perch, scratch or burrow within their school grounds. 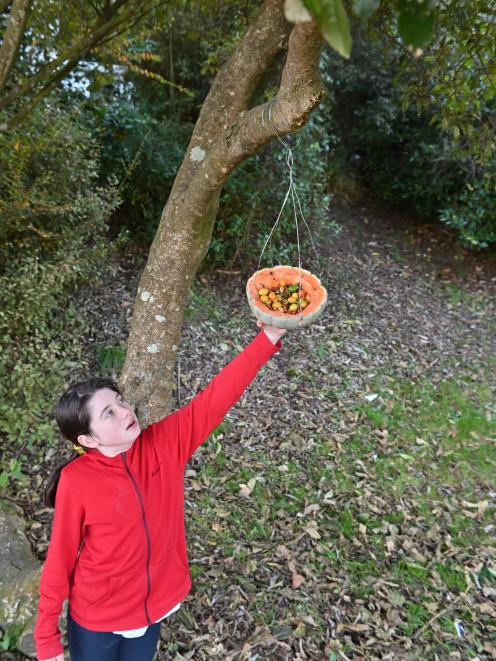 Pupil Dara Houlahan (10) with a pumpkin bird feeder at St Leonard's Primary School.
The pupils' first task has been to find out what is living there. They have gathered data on the fauna, including tracking the night-time forays of predators. Birds such as the piwakawaka (fantail), kereru (wood pigeon) and tui are common, as well as "big bush biters" (large spiders) and cryptic stick insects, Wilson says.

Tahu MacKenzie, Orokonui Ecosanctuary's environmental educator has helped the children figure out which native trees and shrubs are growing at the school. Now they are busy creating short informational videos about each plant species that will be accessible via 3-D printed QR codes placed next to the plants.

For each class of animals they find, the children draw up and embark on an "action plan", Wilson says.

For example, honeyeaters such as tui are visiting new sugar-water feeders made by the pupils, while small passerines are foraging seed from bird feeders the children have fashioned from pumpkins.

"It hollows out well and the birds love it."

A spot at the back of the school is being cleared for a beehive that will arrive with the spring, while some prickly gorse will be rooted out and replaced with native plantings.

The children work together in small groups.

"We mix them up so they are learning off each other. Even the little ones have really good ideas." 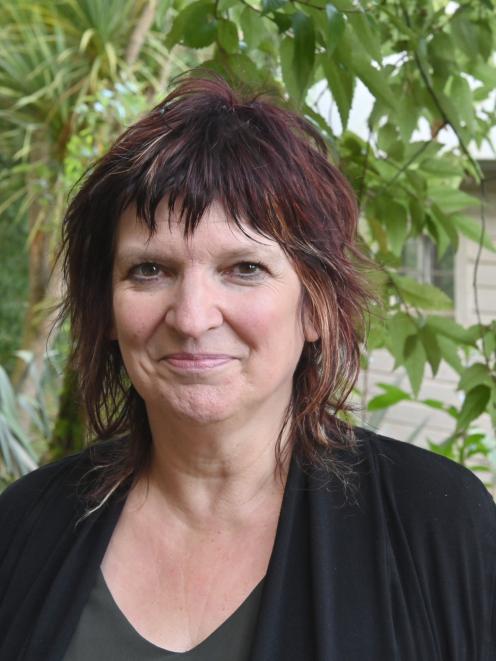 St Leonard's Principal Jo Wilson
The pupils come up with their own, sometimes lofty, goals. One group wanted to build a predator-proof fence around the school to protect its precious residents. Rather than being told "no", the children are investigating the idea, finding prices to see whether it's practical or not.

"And they can come up with a modification they might be able to use in the school," Wilson says.

Caring for an eco-friendly school needs many hands to feed the hens, collect compost and clear litter. Every day, the children "do that for about two songs worth [played on the loudspeaker] so that the rubbish, recycling and composting is in the right place and everything's looking good", Wilson says.

At the other end of the city, in the heart of Mosgiel, tiger worms are munching through sandwich crusts and apple cores at Taieri College. Another Enviroschool, this year 7-13 co-ed of about 1200 pupils has a small pupil-led envirogroup of eco-warriors. The group meets weekly with science teacher Georgie King and Dunedin City Council Enviroschools facilitator Janet Young.

In 2017, the eco-warriors decided to poll the whole school to find out what their environmental theme should be. The vote went to waste minimisation.

Carrying out an initial waste audit in the junior block, the envirogroup found that 70% of the rubbish was food waste, by weight. If that was diverted, they calculated, the school would save about $2000 per year in landfill fees.

They have decided to divert the waste with the help of worms and have placed low-maintenance worm farms with every outside rubbish bin throughout the junior block. Two more bins were introduced to the senior school earlier this month and more will follow.

The precious worm castings are being dug into the school's vegetable garden to fertilise the soil there, the worm juice is being used in science class and excess juice will be sold.

This year, the now 27-strong group is making beeswax wraps to sell at the Otago Farmers Market throughout Plastic Free July.

"As we raise the funds, we'll keep expanding [the worm bins]," King says.

King, who worked as an education for sustainability adviser for high schools in the North Island, has observed that many secondary school pupils come already prepared with a strong environmental ethos from their primary schools. However, she believes that most secondary schools with their institutional structures (e.g, hourly timetables, separate subjects and age-specific classrooms) are not as conducive as primary schools for advancing pupils' awareness and action on sustainability. Sustainability is present in the secondary curriculum, but "it's hard to maintain that [environmental] ethos when the focus is on getting a qualification". 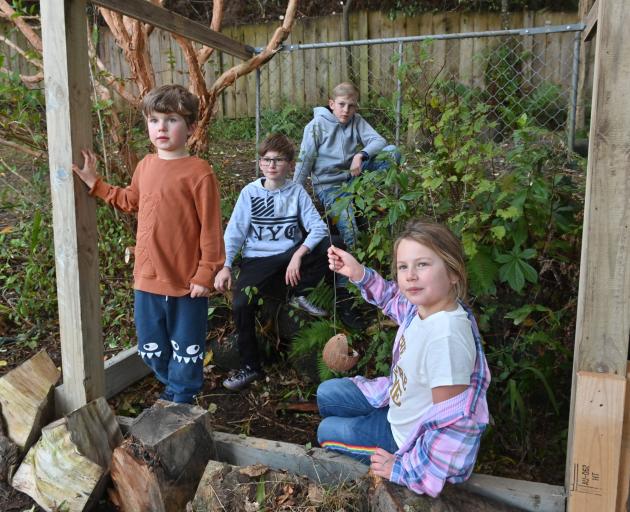 Inside St Leonard's Primary School's new butterfly enclosure are (from left) Cooper Sykes (5), Daniel Stephenson (11), Ewan Gouws (9) and Charlie Wheeler (8, holding a coconut birdfeeder).
According to the Ministry of Education's website, "Education for sustainability is about learning to think and act in ways that will safeguard the future wellbeing of people and our planet". Central concepts for pupils to develop their understanding include: sustainability, considering how future generations will be able to meet their needs; equity, that embraces a respect for all lifeforms; interdependence, with each other and all biodiversity; and responsibility for action, that includes the regeneration of degraded environments.

According to Te Whariki, New Zealand's early childhood learning curriculum, pupils are encouraged to connect with nature and to learn in, about and for the environment. For example, taking a trip to a local park, discovering rubbish in the stream there, and coming to understand why rubbish in the stream is a problem. 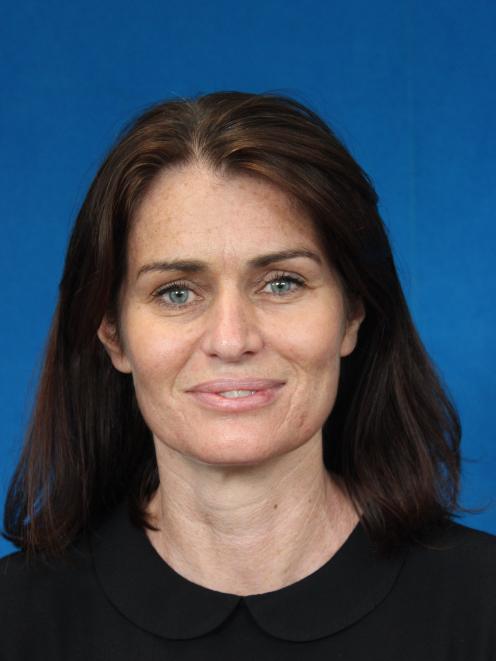 Prof Ritchie and colleagues completed a two-year research project in 2009 with preschoolers that included a focus on caring for nature from a Maori worldview.

"The children really got it," Prof Ritchie says. "For example, saying `What's Ranginui going to do with all that smoke going up into his lungs?' and `We shouldn't be putting rubbish on Papatuanuku, that's not kind to Papatuanuku'. You know it really made sense to them and they were urging their parents to do beach clean-ups and to stop and pick up rubbish."

At this age, children are also introduced to resource conservation and taught about "turning taps off, turning lights off and those ideas, to try to develop norms of behaviour that are in concert with environmental, cultural and economic sustainability," says Assoc Prof Chris Eames, who researches education for sustainability at the University of Waikato School of Education.

By the time children go to primary school, they are ready to learn that environmental impacts can have complex flow-on effects.

"You can bring in ideas about endangered species, because if we lose those species what impact are they going to have on our ecosystems? Children are then encouraged to think more broadly about what they are doing at home," Prof Eames says.

At secondary school, young people grapple with complex issues, such as deforestation and climate change, for which there are no simple solutions. We need to be careful, Prof Eames says, because "around the age of 14 and 15, students can experience feelings of hopelessness and an overwhelming kind of `oh, well, there's nothing we can do'."

Classroom research conducted by Prof Eames found that having a positive vision to work towards, as well as actions to take, are essential to avoiding depression or anxiety that can emerge in the mid-teens.

"Basically, action competence means that you feel OK and capable about taking action."

Young people need to come up with the ideas themselves so they understand why they are doing it and will do it again, he says.

"Most importantly, they can transfer that thinking to other sustainability problems." 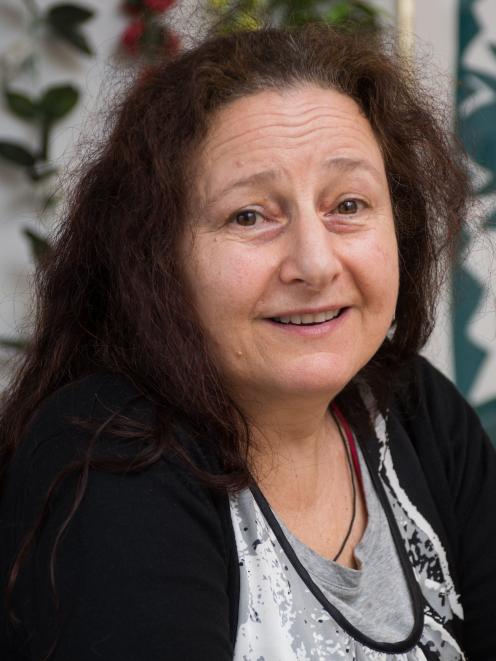 "It often conflicts with the values of the parents, who are of the previous, generation who lived in a different way."

One obvious example is the School Strikes 4 Climate, which have attracted the ire as well as the praise of adults.

Prof Eames, who attended the Hamilton strikes, believes it is a pupil-led initiative based on deep concerns.

"I would say from looking at their faces and the way that they got engaged in the whole process that most of them actually really wanted to be there."

Seventeen-year-old Macy Bisset, an eco-warrior from Taieri College, attended one of Dunedin's climate strikes. Prior to secondary school, she was the enviro-leader at Outram Primary.

"I think I would have gone [to the climate strikes] anyway, because the teachers weren't allowed to influence us," she says.

"I think we have to say there are a number of different influences, but Enviroschools would certainly be a factor," Prof Eames says.

"Those children in Enviroschools are practising an ethos of concern for the environment and understanding the preciousness of Aotearoa and our flora and fauna and social and cultural aspects of sustainability as well, because it's all in the Enviroschools programme, and that will be a huge influence, I think."

Greta Thunberg and the way in which social media has spread her message.

"And what's important there is that those young people actually know that there is a problem and they also know that we adults are not dealing with it well," he says. 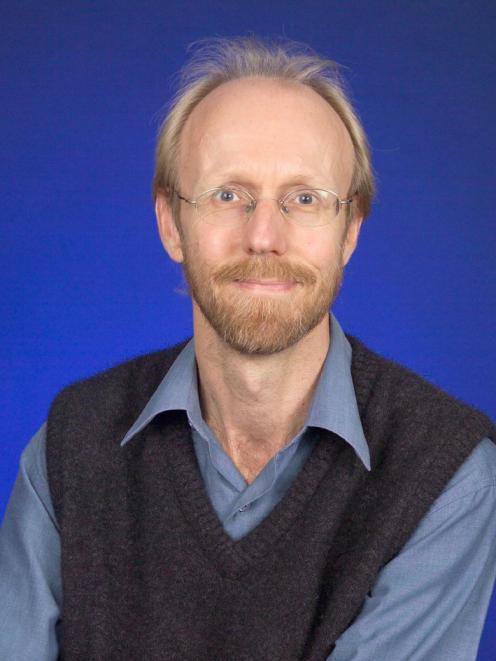 St Leonard's pupils are getting on with the task, preparing for spring, working out the types of flowers and plants they need to propagate in the glasshouse to grow flowers for the bees they will get.

Taieri College's eco-warriors' next goal is to reduce the school's plastic waste from lunches during Plastic Free July. To get the message out, the pupils are busy making a movie.

"We've got a student here who came second in the International Youth Silent Film Festival and he's going to direct it, so we're really really excited!" their teacher Georgie King says.

Will their actions make a difference?

Part of it is the disasters circulating on social media and being covered in mainstream news media.

"So it's like everything is happening around you, and you can't do anything about it. We're trying to give the children the message that actually they can.

"That's really what we've been working on," Wilson says.

The Enviroschools programme "supports children and young people to plan, design and implement sustainability actions that are important to them and their communities". Thirty-four percent of all schools in the country belong to the predominantly council-funded programme. www.enviroschools.org.nz.

If your child is not at an Enviroschool, other options include:

•The Sir Peter Blake Youth EnviroLeaders Forum. An 11-week-long leadership development adventure for pupils who are passionate about the environment.

•Learning is for life, and there are courses and workshops for adults to upskill and network with other like-minded members of the community.