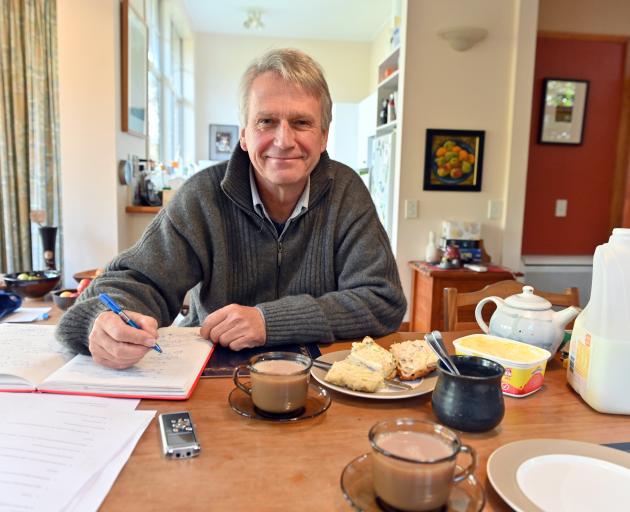 Henrik Moller's research project on hill country farming is about tuning in to local knowledge. Photo: Linda Robertson
In order to care for the environment we must also care for its people, Prof Henrik Moller tells Tom McKinlay.

Fresh scones and a mug of hot tea are the answer. Regardless of the circumstances, that combination of warm carbohydrate and gently stimulating beverage are likely to be efficacious.

That being the case, Prof Henrik Moller and a team of researchers have headed back to the kitchen table - specifically, the one on New Zealand's hill country farms - to see what more that simple sustaining combination can teach us.

Prof Moller and his team have recently begun a research project for Beef + Lamb New Zealand, in partnership with MBIE and two seed companies, looking at regenerating hill country farming.

Among the questions they'll be looking at is how best to look after the land. But the interconnectedness of life means achieving that will involve looking to the health of other variables too.

What Prof Moller suspects will come of the project is further evidence for what he calls the universal precautionary principle (UPP).

To get to that, we need to go back a few years.

Prof Moller, formerly of the University of Otago and an ecological consultant, has spent his career working on environmental issues.

Some years ago he became involved in a project looking at the management of the titi, or muttonbird, population with Rakiura Maori - the people who have lived alongside, harvested and cared for the resource for generations. In the course of that research, Prof Moller says he encountered a challenging perspective on environmental care and connectivity.

Guided by the kaitiaki in the Maori Rakiura community, Prof Moller learned how the titi are being sustained for their mokopuna, generations to come.

"But at another level, I learned about another world view that has people genuinely in nature and connected to nature so that ecological restoration and ecological care is actually as much about biocultural restoration - a mix of land, biodiversity and people care."

The work involved debating anew the eurocentric environmental orthodoxy that the environment is better off without people.

Photo: Getty Images
A hui threw up a contrary perspective.

"That if you take people away from the environment and you dislocate them from their place, that actually means that environment is in more danger."

The UPP extends this to say that same caution should be employed if an action or activity threatens the social and economic sustainability of a community. If you do that - disrupt people from the place from which they draw their knowledge and inspiration - you can set that environment adrift in ways that make it less resilient.

Certainly the people living in that environment will be less well able to care for it.

The planet has to restore, we've disrupted it for sure, but a narrow understanding of the environmental precautionary principal won't get us there, Prof Moller says.

"The ultimate thing you have to do is to maintain a place to stand, a turangawaewae if I was to steal a word from Maoridom, from te ao Maori.

"If we can actually find a place where we can stand, care and love, then we become committed to that place. It nurtures us, so we nurture it. That locks in a future of care and connection."

"What we are asking other people in our community to do, is to take care to not undermine the future of plants and animals and other people; to forgo short-term benefit in favour of all the future people and communities.

"If you violate people's sense of self and don't respect them and do not include them in this social contract then of course they will undermine it and our shared future."

On the other hand, if people are respected and their knowledge of their place is valued, that will contribute to the wider community's store of understanding.

For example, Rakiura Maori's longitudinal involvement with titi has allowed them to spot stresses on the population early, stresses that are suspected to be caused by climate change.

Back at the hill country farm table, with those scones, Prof Moller is hoping to unlock more valuable place-based wisdom, and examples of a similar sense of connection to the land expressed by Maori.

"It turns out that over 60% of the native forest vegetation in New Zealand that is not in the Doc estate is on sheep and beef farms," Prof Moller says of existing evidence of a track record of care.

Hill country has moved centre stage as New Zealand begins to address its contribution to planet-heating greenhouse gas emissions. It is being eyed for the carbon sequestering billion trees initiative.

Prof Moller is an enthusiastic supporter of the initiative - and a hands-on planter of native vegetation on his own land - but says it needs to take into account all the elements of the UPP, caring for the social and economic impacts on communities as it tackles the environmental issue.

That will only happen if those farming communities are consulted and involved in co-designing the future of their hill lands.

"It is really important that their voice and understanding and local knowledge is used to bring a partnership for how those trees are planted: the right trees in the right places."

He and his team are spending six months talking to farmers and farmer advocates, environmental and animal welfare NGOs, policy makers and other researchers about the past, present and future of our hill country.

"The interviews are wonderfully grounding for me as an academic because the work suddenly gets real. The first interviews have been absolutely inspiring."

Prof Moller is taking a Maori whakatauki, or proverb, with him to the project: "Ka ora te whenua, ka ora te tangata". If the land is healthy, the people will be healthy.

But he's reading it backwards and forwards, looking for its most inclusive meanings.

"What has escaped me for decades was the reverse of that reciprocity. It is a timeless reciprocity and you could say `Ka ora te tangata, ka ora te whenua'."

If the people are healthy they are likely to have a long-term vision about a place and their community. They will have time to consider and communicate and collaborate; work together for the future.