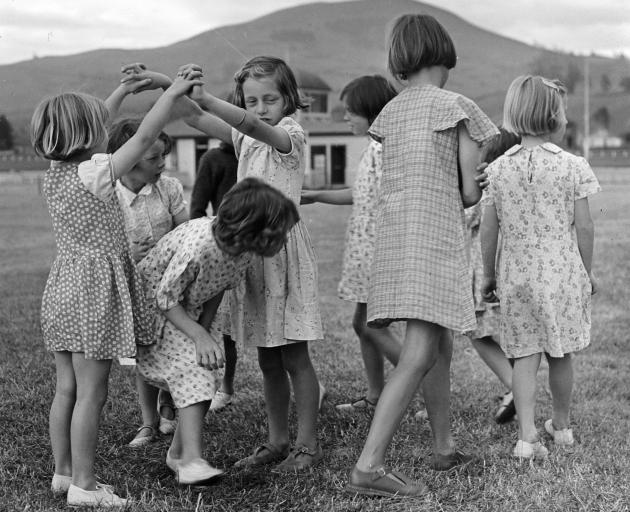 Photo: ODT
Before a vaccine became available  in 1956, polio was a feared "summer sickness". Mainly affecting children, it began like  flu or upset stomach. Most people recovered with no adverse effects, but polio could cause permanent weakness, paralysis or deformity. During the 1947-48  epidemic, schools were closed nationwide and lessons were delivered by Correspondence School. Children were discouraged from playing together or meeting at swimming pools, cinemas and birthday parties. There were 963 cases of paralytic polio in New Zealand in 1948, and 52 deaths. Nearly half of those who survived suffered some degree of permanent disability from the disease.  One way or another, in 1948 polio touched everybody in the country. Dunedin poet and author Sue Wootton takes up the story ...

No story starts clean. Each bursts out of another. The world’s stories are a tangled web from which we tease a thread or two to call our own. No story starts clean but there is always a place where we say it begins. I am going to close my eyes and stab at the map. Let’s say it starts —  ... in the back yard at 11 Paradise Crescent, Beachview, Dunedin, South Island, New Zealand, the world, the galaxy, the universe, on Monday, February 16, 1948. Our mother, Gladys, has the loaded laundry basket under one arm and is charging for the wash line.

"Out the way! Skedaddle!" she says.

I scoop my knucklebones together and shift off the cracked concrete path just enough to let her pass.

Edith is our baby sister, too young to play with and always —  it seems to my brother Pete and me —  crying. I half expect that she’s in the washing basket with the wet sheets. I’m growing tired of Edith.

Our dad Arthur’s a betting man whose picks sometimes come to a bad end.

"In the bassinette. We’ve got an hour. I’ll hang this out and then it’s time for Correspondence School."

She parks the laundry basket and starts to bend and stretch and peg.

"Do we have to do Correspondence today?  It’s so boring. Can’t we please go swimming instead?"

Every morning, Pete and I have to listen to the Correspondence School broadcast on the wireless. Vi, our older sister, has her classes in the afternoon.

"Never the B word!" barks Mum.

"Boring is as boring does. And no, you know you can’t go to the pool."

Our mother swings around.

"Yesterday. When she said she was going for a walk, she met Irene Lacey and they went to the pool."

I had watched Vi roll her togs into a beach towel, and then stuff the bundle into the bottom of her rucksack.

"Are you going swimming?"

I’d asked, and Vi had swung around exactly as Mum just did.

She crossed our bedroom, grabbed my wrist and gave it a hard twist.

Mum takes the topmost nappy out of the basket and snaps it like a bullfighter.

"I’ll have her guts for garters! Does she want to be a cripple?"

I think of Peggy-Peg-Leg, the girl who wears irons who is in the year above me at school. How she sits by herself at lunchtime and never looks up when the big girls join arms and circle the playground singing who wants to play chasing, no boys.

Pete appears at the back door, and comes mooching along the path, a half-eaten slab of bread in his hand. Like me, he’s tired of being cooped up and bored silly with the Correspondence School stories. We hate Brian and Lois and their stupid "Adventures in the Countryside". We need our own adventure. We should sneak away like Vi did. We could go to the beach. After Correspondence. We’ll pretend we have to do a nature project. We won’t say we’re going swimming, but we will. The thought of the beach perks me up a bit. I can almost feel the water cooling my ankles, can see a low wave gliding in on the shiny sand. Our mother takes a long squint at Pete.

"You look much better," she announces.

"Got your appetite back I see. Please don’t eat the whole loaf. I can’t get any more today. I’ll bake some scones later."

Wilcott’s delivery boy has fallen ill, we’ve heard, and there is no way that our mother will let us go to Wilcott’s to collect the groceries ourselves. Our dad, Arthur, will pick them up on his way home from work.

"After Correspondence, me and Bill are going up to school to play cricket."

"Oh no you’re not. You know full well no-one’s allowed at school."

Mum puts a peg in her mouth while she lifts a corner of a sheet, and says through the peg, "More’s the pity."

Pete ambles across the lawn, kicking at the fluff-head dandelions.

"More’s the pity," he repeats, sarcastically, under his breath but not quite low enough.

Our mother throws a peg at him.

"Do not talk back, young man."

We don’t know when the schools will open. In this morning’s newspaper there was another notice explaining the quarantine rules.

"Looks like this is going to go on a bit longer yet."

Our mother leaned over his shoulder and read the article.

"Damn and blast them," she said. And then "Damn!" as the smell of charred toast filled the kitchen. She lunged to flip the pieces out. Our father made a drumroll with his fingers on the kitchen table, and blew a fake trumpet "Hear ye! Hear ye! Children shalt not congregate."

"But I’m tired of not congregating. It’s so b— " Pete, glancing at our mother, caught himself just short of saying the B word.

"Because you lot are infectious."

Our mother brought the toast rack to the table and sat down. She corrected him.

"Only if they get too much sun. It gets in through the back of the neck, apparently. That’s why they get paralysed. It gets to the nerves."

I put my hand over the back of my neck.

"But don’t you worry about it. Just don’t congregate and no swimming and always — always! — wear your sunhat."

She poured herself a drop more tea from the big brown teapot, and spoke to Dad in what Pete and I call her Penroses voice, the one she uses for talking to adults when she doesn’t want us to hear, sending the words from her to him through an imaginary private chute.

"There are two in hospital in the lung."

"No need to frighten the horses Glad," said our father, in his own version of the Penroses voice.

To Vi and Pete and me he said, "Still no school, you lucky blighters."

We three chewed our toast in silence. Now that it’s the middle of February we don’t feel so much like lucky blighters. We’ve been off school since December the eighth;  that’s a long holiday, except it hasn’t been much of a holiday. Aunty Beryl and Uncle Neville live in Wellington, and they were supposed to come down at Christmas, but they weren’t allowed to bring our cousins over on the ferry, so that was that. We didn’t go camping at New Year at our spot on the Taieri. We can’t go to the cinema. I even miss Sunday School. I looked across at Vi. She was chomping toast with menace, a face like thunder. She turned  14 last week, and there was no party.

Our mother got up to make sandwiches. Dad folded the paper.

"Best be off," he said, hoisting himself upright.

Mum held out his lunchbox.

"Stay here. Be my guest. I’ll take this to a quiet office and sit on my bum all day adding up a few columns of figures."

Our father took the lunchbox and opened it a tad, as he always did, as if checking there was something in it. He patted her shoulder.

"I bet they haven’t closed the asylums. That’s good because I will be crazy if this goes on much longer. Soon the asylums will be full of crazy mothers. As soon as fathers have to look after the kids, well, that’ll make the schools reopen. You’ll last about three days. But don’t expect us mothers to come back. We’ll be perfectly happy in the asylum. I’m going to lie down and close my eyes and sleep for five years."

"You try it. They never stop. I can’t get through one of my own thoughts from start to finish without one of them — "

As if on cue, Edith roared awake, and our mother sprang away from our father.

But it was too late, Mum had dived into the hallway, plucked Edith out of the bassinette and was rocking her back and forth, patting her little back.

"You go Arthur. Don’t worry. It’s not like I need to think. I’ve had plenty of practice  looking after the children ... on my own."

Dad picked up his cup and saucer and took them to the sink. He spoke through the window as if our mother was out picking silver beet in the vegetable garden.

"I did not ask to be conscripted, Gladys."

Apart from Edith’s quietening grizzle, there was silence in the kitchen, a silence that was coming off both of our parents in waves. He had spent three years away, and come back on a hospital ship. Our mother had not wanted him to go in the first place. Her brother, our Uncle Nev, was a conchie, she often told us proudly.

Once, she told us that when our father was in the room, and he said quietly, "He wasn’t much help to Beryl and the kids from a detention camp, was he, Glad."

Our mother whistled between her teeth, her way of letting out enough steam to go forward. She took our father’s hat and walking stick off their hook, and handed them across.

Now Mum pegs out one of Edith’s nappies and reaches down for another one. Momentarily she has no peg in her mouth. She swings around, hands on hips.

"Go, then. What’s the point if Vi’s been out swimming and congregating? Clear out, the lot of you.  Pete, take Joyce with you and go play somewhere else. Come back at tea time."

"What about my sanity?"

I catch Pete’s eye. Let’s get out of here, quick, before she changes her mind. I pocket my knucklebones quick smart and rush inside to grab my sandals where I kicked them off next to my bed last night. I rummage for my togs in the tallboy, and grab a cardigan too, just to hide them in. Vi’s curled up on her bed, face to the wall.

"Mum says we can go out. Pete and me are going to the beach. Come with us?"