Bringing on the Bacon 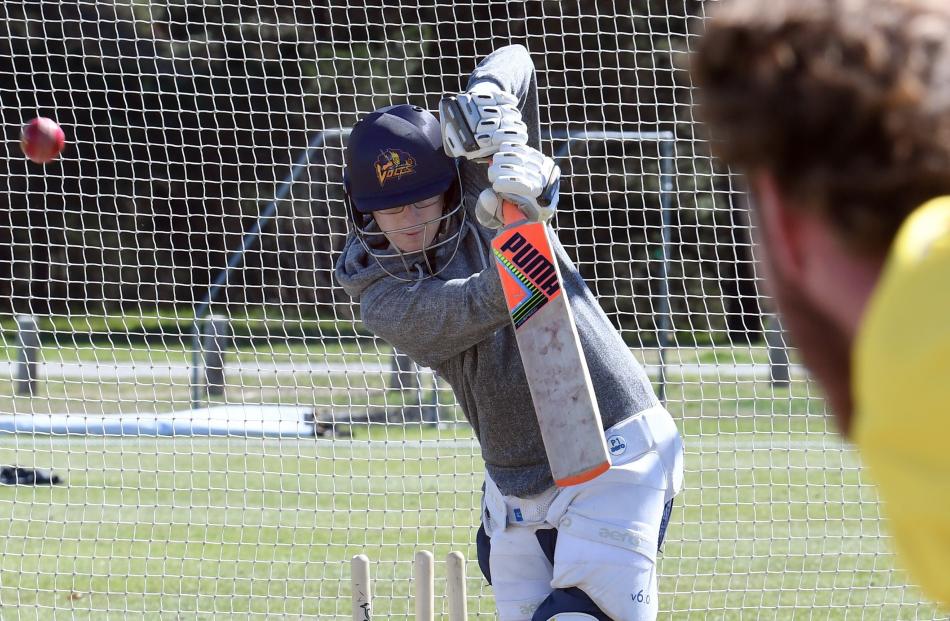 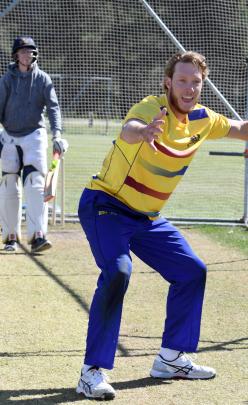 A huge appeal for lbw by Bacon is successful, sealing Nugent's fate on the last ball of the over.

Five Otago Daily Times reporters have gritted their teeth and gone way beyond their comfort zone to bring back stories of fear and mortification. Today, Sean Nugent pads up to face a red leather ball coming at him at 130kmh. 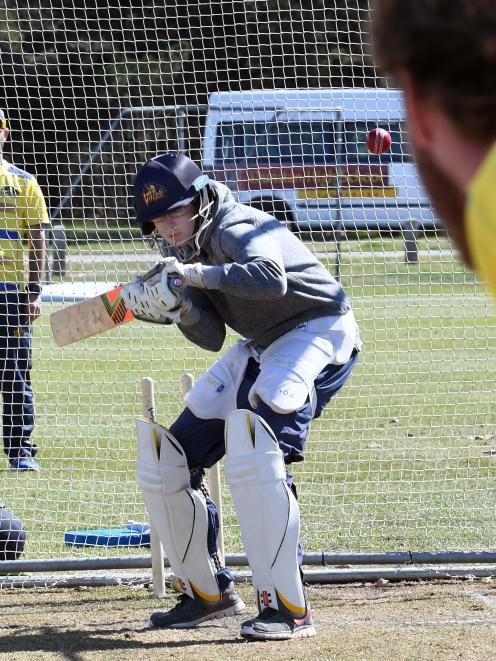 There was no hiding in the nets for ODT reporter Sean Nugent when he came up against Otago Volts fast bowler Matt Bacon. Photos: Stephen Jaquiery

My mind was racing.

I was claustrophobic, surrounded by walls of netting, feeling a mix of nerves and excitement.

My challenge: survive an over against Otago Volts fast bowler Matt Bacon.

This was going to be a battle of reactions and reflexes.

With Bacon bowling at about 130kmh, I knew I would have about half a second to react and play a shot.

I concentrated as Bacon started his run-up for his first delivery.

He charged in and whipped through the crease.

My eyes widened, searching the space in front of me for a little red dot hurtling through the air.

I spotted it and gleefully pushed forward to defend.

The red leather made a beautiful sound as it struck the middle of my bat.

One ball down, five to go.

Maybe this was not going to be much of a challenge after all, I thought.

Even the Volts were taken aback.

''Get this guy a shirt,'' one yelled out from behind the net.

I was feeling pretty good about myself, but knew there was plenty more in store.

Bacon charged in again, and banged it in short.

I was late to duck. I was expecting a bouncer at some point in the over but not second ball.

Luckily, it was slightly down leg and sailed over my left shoulder, a prudent reminder that this was not going to be easy.

I readjusted my helmet, and focused again.

Bacon's third ball was a wide down the leg side.

Halfway through, and I had barely been troubled.

Mind you, I had only hit one ball and it failed to even roll off the pitch.

Bacon was warmed up now and was really steaming in off his long run-up.

The fourth delivery was more difficult to deal with, aimed in at middle and leg just back of a length.

I jumped back and rode the bounce, deadbatting it straight down at my feet.

While my heart was beating at a rate of knots and each ball was drawing oohs and aahs from the onlooking Volts players, this had hardly been an exciting over of cricket.

But that was set to change.

Bacon finally pitched one up outside off on his fifth delivery, and it felt like receiving a Christmas gift.

Immediately I strode into a full-blooded cover drive and flung my bat wildly at the ball.

I soon realised the exciting prospect of smashing a first-class bowler through the covers had got the better of me and I had swung too early, simply spooning what would have been a simple catch for the cover fieldsman.

But this was the nets, where hitting it in the air has no consequence, so technically my goal of surviving the over was still very much alive.

I knew it would be a bouncer. There was no way I would escape this without some kind of bruise or dent in the helmet to remember it by.

Bacon steamed in again, and I prepared to rock on to the back foot to avoid a visit to the local hospital.

But another full ball on middle took me off guard.

I tried to quickly readjust and turn it on to the onside.

No such luck as the ball thumped into my pad, although I got a feather of an inside edge as it went past.

Bacon appealed for the lbw and it was given.

Controversy reigned supreme. I wanted a review but I was told DRS was unavailable.

How convenient, I thought, as I trudged out of the net in what was one of the greatest robberies seen on a cricket field.

• My experience against Bacon did not pay off, as I could only manage a duck in my first game of the season, removed by former Volts paceman Sam Blakely.

There was no hiding in the nets for ODT reporter Sean Nugent when he came up against Otago Volts fast bowler Matt Bacon. Photos: Stephen Jaquiery
Comment now