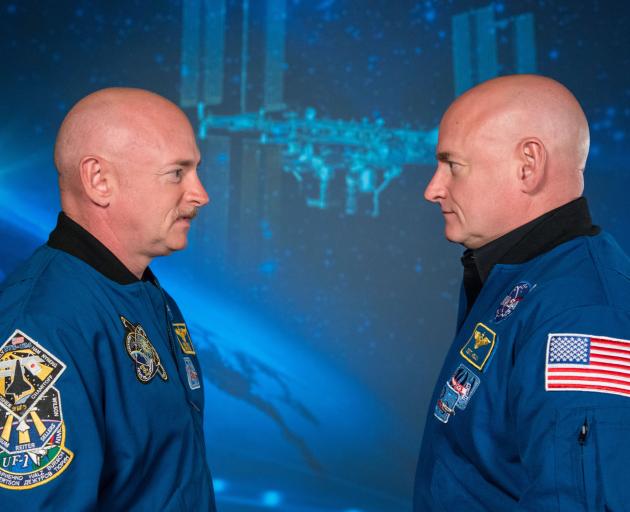 Astronauts Scott Kelly (right) and his twin Mark at a media conference following Scott’s 12 month mission aboard the International Space Station. PHOTOS: NASA
United States astronaut Scott Kelly spent 11 months aboard the International Space Station,  shaving 13 milliseconds off his Earth age in the process. He was quizzed by Andrew Anthony about spacewalking, recovery and the scientific value in sending an identical twin into space.

Scott Kelly is a 53-year-old American astronaut and a veteran of four space flights. He retired in 2016 after spending 11 continuous months on the International Space Station.

During his time on board the station, he orbited the Earth 5440 times and made three space walks. He was also part of a study with his identical twin and fellow astronaut, Mark Kelly, to examine the genetic effects of spaceflight. As Mark was on Earth and Scott in space, they made for perfect comparative analysis, though it was not the reason Kelly was chosen for the mission. He has just published a memoir, Endurance: A Year in Space, a Lifetime of Discovery.

What do you think has been the most important achievement of manned space travel?

I think it’s how it accelerates our development of technology, whether it’s telecommunications, computer power, the ability to put satellites into orbit. I think we’d live in a much different world if we didn’t fly in space.

You lost several friends in the 2003 Columbia disaster. And as you say, there were many warnings about the foam problem that caused the accident that went unheeded. How did you deal with that knowledge, and did it ever make you lose confidence in the supporting staff?

It was hard — several close friends were on that mission, and I nearly ended up as the pilot myself — but you cope. Clearly it was a wake-up call for the whole organisation, but I didn’t lose confidence. We adjusted our management philosophy after the accident. I had faith that Nasa would conduct a rigorous investigation, and it was obvious to me during my next mission that they were proceeding with an abundance of caution.

What’s the psychological and physical effect of literally coming back to Earth?

Physically there’s stiffness, swelling of my legs, rashes where my skin hasn’t touched anything, nausea. In space you lose a significant amount of blood volume. You regain it when you get back very quickly but what you don’t regain is the red blood cells you lost with it and that takes months to recover. That makes you feel fatigued. It’s a six- to eight-month recovery. Then there’s things you can’t feel: bone loss, muscle loss, structural changes in my eyes. The effects of radiation at a genetic level — I don’t know what they’ll be. The psychological effect, at least for me, being in this controlled environment and being told what to do and when to do it for a year, and then coming back and not having that type of structure, it’s definitely a challenge.

Scott Kelly during a space walk to prepare the International Space Station for the docking of a Russian cargo supply spacecraft in 2015.
Do you know what the twin study of you and your brother was focused on? And have you been told about any results?

Mostly genetic research but also cognitive studies. The research is still happening. It takes three to five years for the results to be published, so we don’t really know much about the conclusions yet. The one big find so far was that my telomeres, basically these things at the end of our chromosomes that shorten with stress and age, actually ended up longer than Mark’s. It’s the opposite of what the scientists expected, given the challenging environment on the ISS, exposure to radiation, etc. I was already six minutes younger than Mark but, as Einstein predicted, I’ve come back six minutes and 13 milliseconds younger after a year in space.

What about the sense of being cut off from humanity. You’re stuck with a handful of people for months on end. Did that never torment you?

You’re connected with email and you can make phone calls and follow the news. On the one hand you’re aware what’s going on on Earth, but the fact that you’re not on it does make you feel a little bit separate. It gives you a different perspective on our planet, which is a very beautiful oasis in our solar system, but at the same time has a lot of challenges and struggles: the environment, a lot of war and conflict and hardship.

Do you think there’s a limit to how long people can physically and mentally stay up in space?

I think it would depend on what they’re doing and what you want them to do when they’re done being in space. If you had no choice, you could probably live there for years. If you’re going to Mars, I think that’s doable. People are going to spend years in space and they’ll want to get back to somewhere with gravity. There probably needs to be some kind of artificial gravity as part of the spacecraft. Going to Mars and back is not going to require artificial gravity, but if you wanted to go to the moons of Saturn some day, it probably would.

It’s pretty crazy. Hopefully, when people get to that part of the book, it’ll make them feel like they’re there. I think it’s like that type two kind of fun. Type one kind of fun is fun while you’re doing it, like a carnival ride. Type two is fun when it’s done. It’s kind of like that.

On one of your previous missions, a cosmonaut became untethered during a space walk. What would have happened if he hadn’t fortuitously hit an antenna that bounced him back?

Frankly, he would have died — either from rising CO2 or losing oxygen. It was a possibility I tried to avoid contemplating too much when I did it myself for the first time.

Scott Kelly in the cupola of the International Space Station.
What were the most testing aspects of your first space walk?

Probably the sheer amount of time. Even before the walk itself, you spend weeks preparing and studying. You’re in these incredibly complex suits for almost 12 hours straight — hours in advance, and then almost eight for the walk itself. They work great but can be really stiff and cumbersome. I never totally get why they call it spacewalking — you’re crawling around with hands, and you’re working and repairing every second. Not exactly a stroll.

It lasted many hours. Were you at any point anxious?

Not especially. I’ve had a knack for compartmentalising since my days in the navy. There are so many little tasks to take care of on a spacewalk — eight hours is barely enough time to complete everything we’re assigned. So I just kept focused on what was in front of me: my gloves, the pieces of the station in front of me. I barely even looked at the Earth looming just outside my field of vision.

Do you think it’s inevitable that at some point we’ll have some manned space flight to Mars?

I don’t know if it’s inevitable. It think it will happen. Inevitable means it has to happen. It seems to me that, despite any issues there may be with climate change and pollution, Earth is much more inhabitable than Mars, which basically has no atmosphere or oxygen or, as far as we know, forms of life. With our current technology, to go to the nearest Earth-like planet outside the solar system would take about 80,000 years. Whoever got on that spaceship, their ancestors would probably be a different species.

You say that reading Tom Wolfe’s The Right Stuff inspired you to become a pilot, which in turn led to being an astronaut. What inspired your brother?

Honestly, you’d have to ask him. He had his life organised far earlier than I did, so he took the more traditional path to becoming a pilot and then an astronaut. Maybe he didn’t need the kick I did from reading Wolfe’s book. I think he was also inspired, like I was, by our families. Our grandfather, a merchant marine officer and fireboat captain, and our mother, who put in tremendous work to join the local police force. It inspired us to try the hardest thing we could manage to find.

And was there ever rivalry between you?

Not really. Though technically it did take him two tries to get into Nasa — his first application got rejected. I sometimes remind him.

If there’s one moment you could relive as an astronaut, what would it be?

Coming back from space after a year. Just the smell after the Soyuz hatch opened. I can’t imagine a better feeling. — Guardian News and Media

• Endurance: A Year in Space, a Lifetime of Discovery by Scott Kelly is published by Doubleday