A deserted Buckingham St in Arrowtown. PHOTOS: TRACEY ROXBURGH
Straining at the leash to get out and about after weeks of lockdown, Charmian Smith heads off to Queenstown and rediscovers its spectacular beauty now the crowds have disappeared. 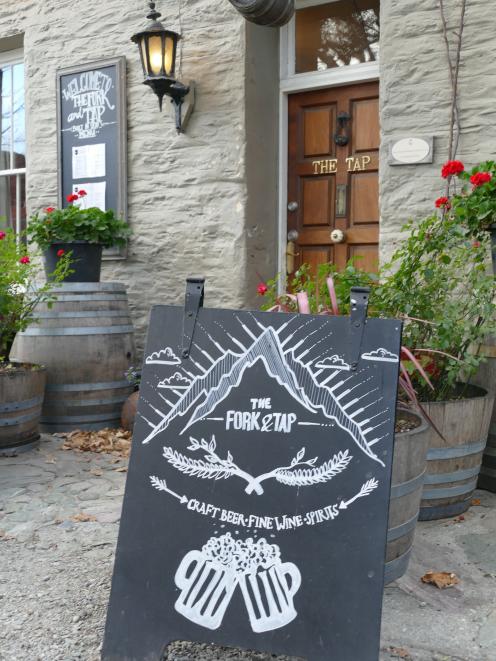 The Tap and Fork, a busy gastro pub in historic Arrowtown.
It would be a good time to go to Queenstown, people were saying and we agreed. Like many other ‘‘locals’’ we’d avoided the place for years because of the crowds of tourists. Last time we visited, seven years ago, we got stuck in a traffic jam and took more than an hour to get from the Glenorchy road to the turn-off to Arthur’s Point. The traffic going the other way was still barely crawling, probably all the way to Frankton.

However, now in Level 2, allowed to travel, with cafes, restaurants and shops reopening — and a promising weather forecast — we set off in our motorhome for Queenstown and surrounds.

Many cars and motorbikes were on the road over the Strath Taieri, people enjoying the glorious weather on the first weekend of freedom. Unfortunately most of the public toilets were still closed, making for a less than comfortable journey unless you stopped at a cafe or had your own toilet on board as we did.

A few of the wineries had their shingles out around Cromwell and Gibbston — wineries are always an enjoyable visit, especially if lunch is involved. A circuit round the Bannockburn Sluicings is an ideal way to walk it off.

After setting up for the night near Arrowtown we walked along to Buckingham St to see what was open. It was quiet late in the day with few people about and the only shop that had been open was closing for the evening. However, three or four restaurants were about to open and several advertised they would open later in the week — it was only Tuesday and less than a week into Level 2.

Enjoying lunch with a glass of wine beside the peaceful lake reminds why visitors starting coming here.
We settled for a pizza, glasses of local wine and Queenstown craft beer at the Tap and Fork, a busy gastro pub in a historic cottage. Locals and people from elsewhere in Otago were coming and going, meeting friends for a drink and a meal. It seemed like normal except for having to check in and nobody sitting or standing at the bar.

The following sunny morning saw a few busy coffee places, more cars and people about and more shops open. The Lakes District Museum, an essential visit which also houses the i-Site, was open but no tours were available — we had thought of going to Macetown.

A few people were making use of the wonderful network of cycle trails around the area and we unloaded our bikes for a short ride or two.

Over in Queenstown it was busier, people eating takeaways on the beach, queues outside Fergburger and people dining in the sun at the Pier, but ducks asleep on the grass by the lake didn’t even move as we walked within 30cm or 40cm, so used are they to people in this once busy tourist spot.

The i-Site, like many of the of the other places that booked tours and adventures, wasn’t open yet, but the Doc office was, providing friendly information about weather, tracks and campsites. Some of the shops, especially those selling woollen clothing, had sales, but many were still closed. I wondered if some, especially those aimed at the Asian market, would open again.

The Real Journeys office alongside was also closed, but some of the small boats were operating, as, surprisingly, were Milford flights. More would open at Queen’s Birthday, we were told.

Ducks sleeping in Earnslaw Park undisturbed.
However, the gondolas were gliding up the hill, the cafe at the top was open — and the luge, if you felt like an adrenaline rush. The panoramic views from the Skyline are always worth the trip on a fine day.

We watched a plane coming down the lake to the airport and later taking off again — usually there’s a constant stream of flights but people are starting to come back in small numbers.

May is the off-season, a quiet period anyway, one of locals said. A few people with holiday homes had arrived, but they were hoping Queen’s Birthday would bring more visitors and once the snow arrived, the ski season would help.

Enjoying lunch with a glass of wine beside the peaceful lake and the spectacular beauty of the bare Remarkables and the golden Cecil Peak, it’s easy to be reminded what brought visitors here in the first place before it became so overrun by foreign tourists it was spoilt for ‘‘locals’’ like us. Get back there and enjoy one of the most beautiful places in New Zealand before they all come back.