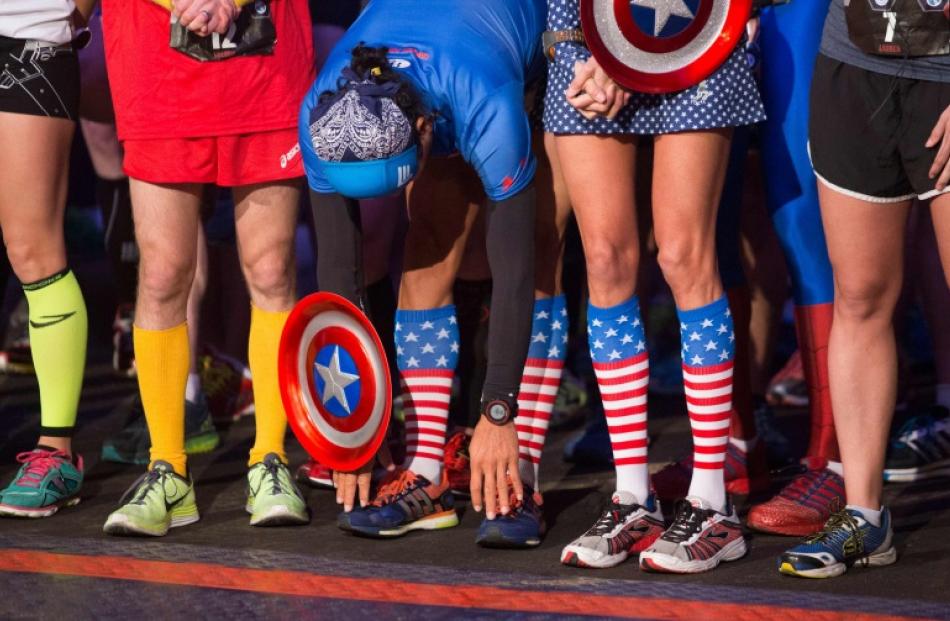 Runners in super hero outfits prepare at the start of the Avengers Super Heroes Half Marathon in and around the Disney Parks in Anaheim, California. File photo by Reuters 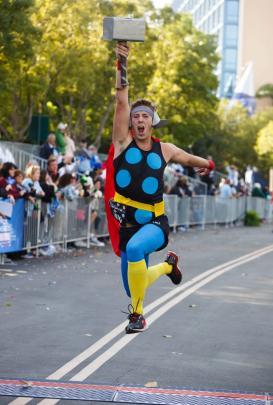 Jacob Boyer lifts his Thor hammer while leaping across the finish line during the Avengers Super Heroes Half Marathon in and around the Disney Parks in Anaheim, California. File photo by Reuters 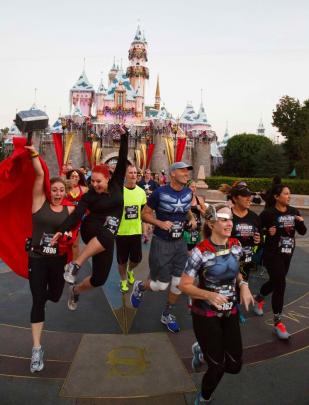 Runners in super hero outfits stream past Sleeping Beauty's Castle during the Avengers Super Heroes Half Marathon in and around the Disney Parks in Anaheim, California. File photo by Reuters

At 5am on a Sunday, thousands of people stream down Disneyland Drive dressed in a mix of running gear, homemade costumes and face paint as Captain America, Thor or The Hulk.

It's the first Avengers Super Heroes Half Marathon, a 13.1-mile contest that is part of an expanding slate of sold-out races at Walt Disney's theme parks in California and Florida.

Runners come to Disney races for the chance to dash past Space Mountain or Cinderella Castle, grab high-fives from costumed characters, and show off their fandom.

For Disney, which has become one of the biggest race organisers in the US, the multi-day influx of runners, relatives and friends provides a chance to earn extra cash and help fill theme parks and hotels during slower weekends.

"I love the atmosphere," said Lauren Harrell, 27, after she finished the November super heroes race in a hand-painted T-shirt and foam headpiece as Groot, the human-like tree in Disney's Marvel Studios film "Guardians of the Galaxy."

"People are cheering you every step of the way. And nobody judges you for dressing in costume," said Harrell, who had a speaker attached to her waist so she could dance and sing to the "Guardians" soundtrack.

What started with one race in 1994 has swelled to 190,000 people registering for the seven Disney race weekends from October 2013 to September 2014. Many races sell out within hours.

This weekend's Walt Disney World Marathon in Orlando, Florida, is the largest race weekend in the country, according to race director Jon Hughes.

Starting Thursday, more than 53,000 runners will compete over four days in a marathon, half-marathon, 10K or 5K. Some will enter more than one race, and enthusiasts will finish all four, a 48.6-mile feat called the Dopey Challenge.

Two more race weekends have been added to this year's runDisney schedule, including a Star Wars Half Marathon at Disneyland in California, from January 15 to 18.

Other upcoming events include half marathons with Disney Princess or Tinker Bell themes.

The races take place inside Disney resorts and on neighboring streets but outside of regular park hours. Related events include kids' races, a Diaper Dash for crawlers, and a carb-loading Pasta in the Park party.

Disney designs the races for first-time runners up to elite athletes, said Maribeth Bisienere, a senior vice president who oversees the runDisney business.

Competitive runners can use their Disney marathon results to qualify for the Boston Marathon. Contestants there for fun can stop for photos with Disney characters.

"It is unusual that you get both ends of the running gamut," Bisienere said.

Entry fees, which include a shirt and medal, range from $60 for a 5K, to $170-$195 for a marathon or half marathon. A visit to the park to ride the attractions costs extra.

Fans say the Disney experience is worth the price.

At the Avengers race, which wound through Disneyland and the nearby Angel Stadium, runners carried red, white and blue Captain America shields and cardboard versions of Thor's hammer, or sported Mickey Mouse ears.

JT Rose, 42, from Kingsport, Tennessee, in his seventh Disney race, ran as Thor's brother Loki, with a homemade staff and helmet.

"Everybody who comes to Disney gets into it," said Rose. "All the fans are just going crazy. It's just a really fun race."