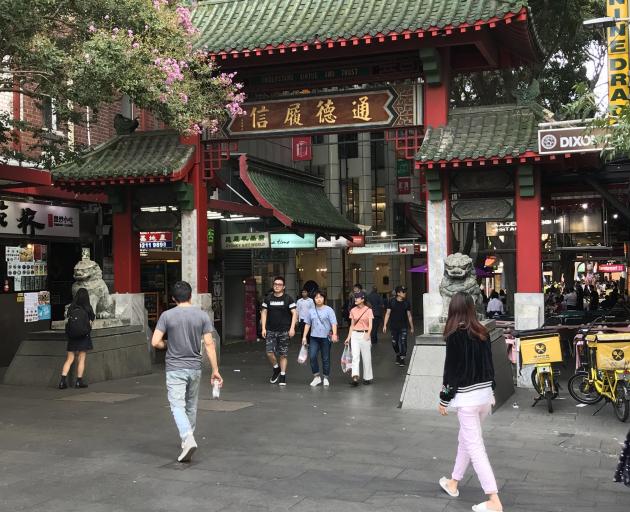 The paifang, or entrance gate, in Dixon St, Sydney. PHOTOS: GILLIAN VINE
Gillian Vine indulges in a taste of Asia in Sydney.

Because it uses leftovers, he explains. ``Why else do you think the last course at a Chinese wedding is always fried rice?''

Patrick is leading our small group on a Taste of Asia tour of Sydney's Chinatown. That means food, lots of it.

Pure Aussie, Patrick describes himself as ``stir-fry'', a reference to his Chinese/Vietnamese/Cambodian heritage, and it seems as the three-hour tour progresses that he knows everything worth knowing about Asian food. 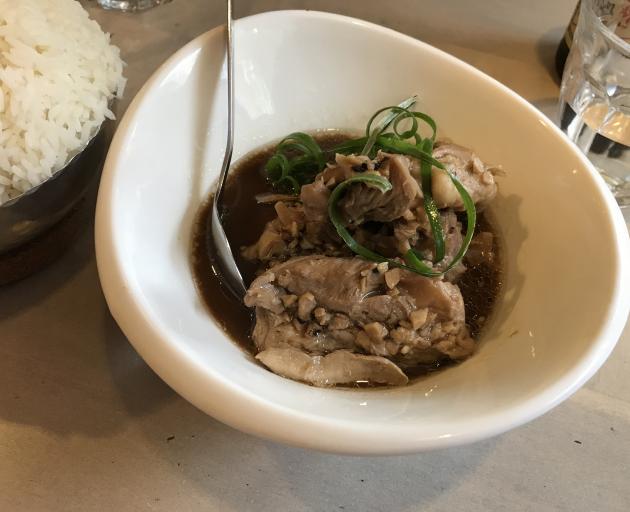 Adobo is a popular Filipino dish.
We start on the edge of Chinatown at La Mesa, a Filipino restaurant, where we begin with adobo. This is a chicken version of a popular dish that involves marinating the meat in vinegar, soy sauce and garlic, then simmering it in the same mix. That it is reminiscent of some Chinese dishes is a reminder that the Philippines has a significant Chinese community. The second dish, caldereta, made with beef rather than the traditional goat, is a rich stew that clearly has Spanish origins, again reflecting the country's history. Asked to choose our 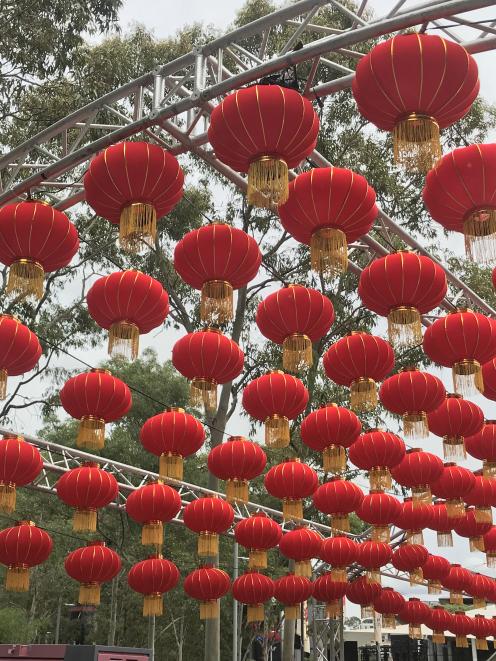 Lanterns light up the streets to mark the lunar new year.
favourite, it's a draw, our group of 10 split evenly between the chicken and beef.

We straggle around the corner, into what is more recognisably Chinatown, with its traditional gateways (paifang) at either end of Dixon St.

Although it has been here in Haymarket for more than a century, this is Sydney's third Chinatown. The first settlement was in the Rocks area, before it moved to the area around what is now Paddy's Market.

Then the 1920s saw its establishment in its present location at the southern end of the city's CBD.

As it's the tail end of the lunar new year, which celebrates the Year of the Dog, the area is full of red lanterns and improbably coloured dogs, one of which seems to have been modelled more on a kangaroo than a canine.

We pause to admire the skeleton of a tree sculpted into Golden Water Mouth by artist Lin Li. Incorporating the five elements of fire, water, gold, wood and earth, the design encourages positive energy and good fortune. The tree, a 200-year-old yellow box gum (Eucalyptus melliodora), was sourced by the artist from the town of Condobolin, about 450km from Sydney, where many Chinese settled during the 19th-century gold rush. 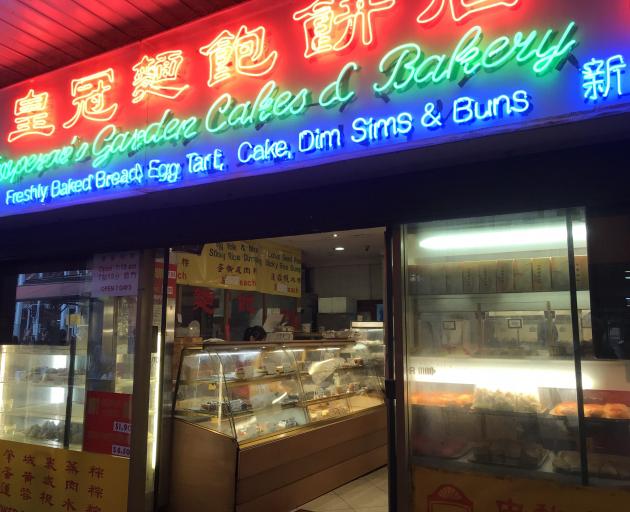 Chinese and English signage at the Emperor’s Garden bakery.
Chinatown's shop windows are full of things like dried abalone, a status food that Patrick says is ``very prized'' and can cost $A200 ($NZ219) a kg. Sea cucumber is also extremely expensive, something I fail to understand, having tasted it and found it leathery and uninspiring.

It's time to try more food, this time emperor's puffs. The Hong Kong-style buns are a specialty of the Emperor's Garden Cakes and Bakery in Hay St and understandably popular with their filling of sweet creamy custard. 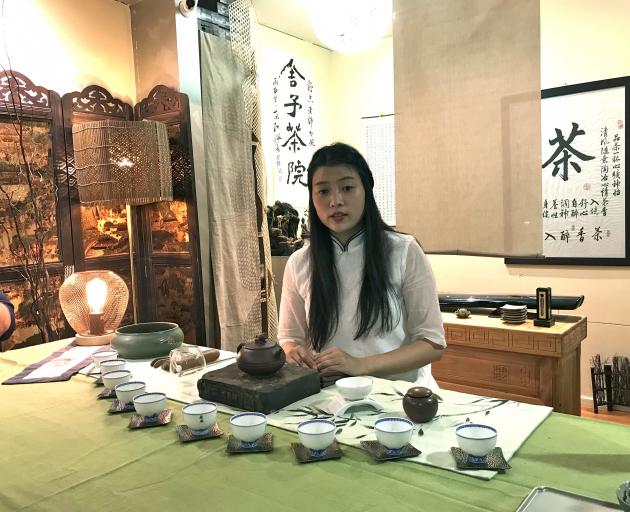 The tea ceremony at Topotea.
Of course, no Chinese meal would be complete without tea and at Topotea Tea Shop, the last teahouse in Chinatown, we are treated to a formal tea ceremony presided over by a serious young woman. She explains the importance of discarding the first brew, as the leaves are not yet properly open. 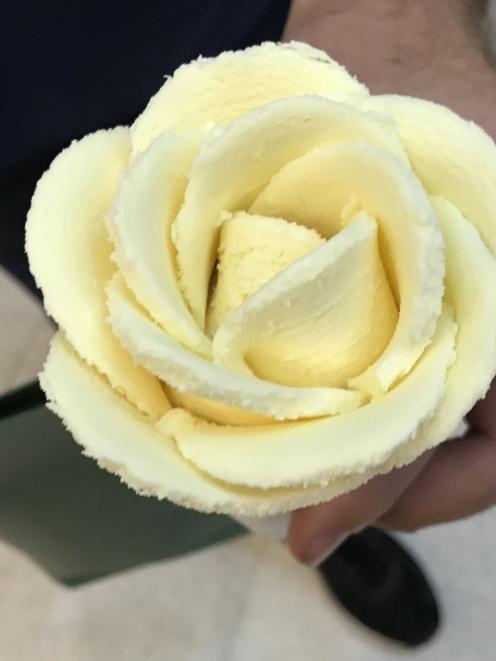 A lotus flower sculpted from durian ice cream.
Our semi-fermented oolong is poured from the second infusion, a light yellow-green tea with a delicate flavour that makes it perfect for summer drinking.

Topotea sells high-end packaged tea, cups and teapots, and on Saturday mornings presents tea ceremonies at the Chinese Garden of Friendship in nearby Darling Harbour.

Above Topotea is the improbably named Sparrow's Mill Express, one of a number of eateries in the Sussex Centre. We sample the signature dish, Korean fried chicken, crispily fried and utterly delicious.

Still in Sussex St, Chinese Noodle King serves us bowls of noodles and one of my all-time favourites, fried dumplings. The tea has faded away and I ask for a glass of water. There's a long pause and I'm handed a pint tankard of tepid water, obviously straight from the kitchen tap.

I recall being told that the Chinese don't believe in ice-cold drinks so I happily drink my water, to much derision from my fellow gourmands.

The tour is almost over, Patrick pointing out other places that have good food and - on a more serious note - the tribute to war veterans of Chinese descent. It names the men and women who served in the Australian armed forces but whose contributions from the Boer War onwards went unrecognised until 2003, when the memorial on the corner of Dixon and Liverpool Sts was unveiled.

Sea cucumber is an expensive addition to some Asian dishes.
Our final stop, I-Creamy Artisan Gelato, seems more Italian than Asian until a close look at the list of flavours reveals Thai milk tea, jasmine milk and durian ice creams alongside mango and coconut-lichee sorbets.

The big appeal is not just the flavours but the staff's ability to craft ice cream into lotus flower shapes. I opt for durian and the flower looks too perfect to eat but of course greed wins.

It's that kind of evening.

The tour
Taste Cultural Food Tours is not a conventional business but a charity,  whose profits all go into offering  training and employment opportunities to refugees, some of whom act as food-tour guides. As well as the three-hour evening or Saturday lunchtime tours of Chinatown, there are longer daytime cruises from Sydney Harbour and these include Middle Eastern and
Asian food. Tour prices range from $A75 ($NZ80). Private tours can also be arranged. For details, visit www.tastetours.com.au
Comment now