Goin' on the Ghan: snacks on the tracks

By Pam Jones
0 Comments
Pam Jones revels in travelling Australia from north to south, soaking up the adventure of train travel on the Ghan expedition, and some fine cuisine along the way.

Want a guaranteed way to add some Aussie flavour to your band?

Pop a didgeridoo in it, of course.

Beside Kenny on the cello and Cain and Glenn on bass and gee-tar there was "Starman" Dan, quietly thumping some Aussie vibration to the toe-tapping bush music of Alice Springs' Heartbeat.

We were dining mid-Ghan, our Outback "under the stars" dinner moved inside because of forecast rain and waiters and chefs taking it in their stride to move a two-course buffet for 300 guests from the scheduled old telegraph station outdoors venue to a racecourse marquee. 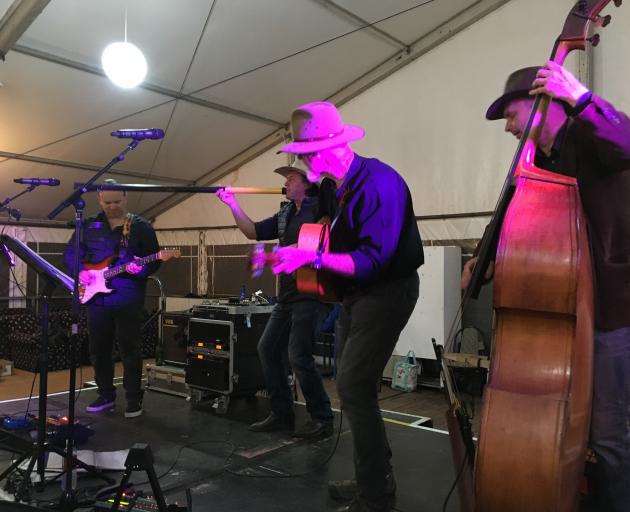 Heartbeat band members (from left) Cain Gilmour, ‘‘Starman’’ Dan Falzon, Glenn Morrison and Kenny Glaze play on during a Ghan excursion dinner at Alice Springs.
Locals were hoping for wet weather after months of "the dry", and there in the middle of Australia the heavens opened on schedule. Bucketfuls on our canvas roof. Soaked staff as they moved from tent to tent. And the band - complete with didgeridoo - played on.

It was a nice chapter in our four-day Ghan train expedition, and we felt like good luck charms as we hoovered up the buffet and swung around the dance floor. Of all the nights for rain, it chose the night we called into Alice. We're from the (semi) desert too, those of us from Central Otago cried! You're welcome!

It was a "kindred spirit" experience in a place where the heat, dust and adventure felt a little like the Otago of old.

The Ghan is described by Great Southern Rail as its "flagship rail journey" and the ultimate way to do the Australian outback.

I'm inclined to agree, and my husband and I cheerfully soaked up the Ghan's simultaneous laid back/ready-for-the-next-thing-to-happen vibe. Civility and adventure sat neatly side by side. It felt fancy and rugged all at the same time. 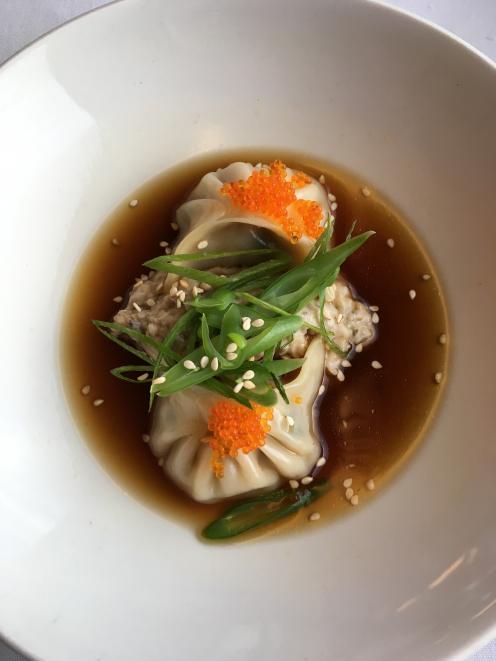 Prawn and pork dumplings are served in a chicken broth with eggplant puree, green bean and sesame seed salad and orange tobiko (flying fish roe). PHOTO: PAM JONES
The Ghan celebrates its 90th anniversary this year, having started out as the Afghan Express steam train.

The train takes its name from the 19th century Afghan camel drivers who helped explore Australia's remote interior, and its tracks were built in stages. Construction on the line began in 1878, but the section to Alice Springs was only started in 1926 and completed in 1929 (until then, the last part of the journey from Adelaide to Alice had to be made by camel).

It was not until 2004 the line was extended to Darwin, the trip then covering 2979km from beginning to end.

You can now do the Ghan either as a three-day, two-night trip, or take another day (and night) and do The Ghan Expedition, which includes off-train excursions in Katherine, Alice Springs and Coober Pedy (and an optional pay-extra side-flight to Uluru, from Alice).

We did the expedition, boarding the train after two great days in Darwin and five in Kakadu, finding it easy to kick back another notch as we boarded the train.

This is how your day on the Ghan will unfold.

Then another two courses of lunch including things such as buffalo curry; tropical chicken salad; or tomato, sweet potato and beetroot tart (with wattleseed or bush damper rolls). 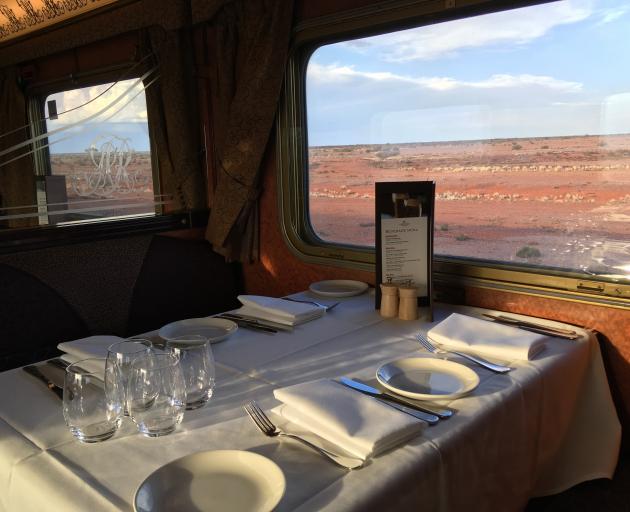 If you are able to waddle off the train (yes, every dish in the Queen Adelaide Restaurant was as good as it sounds), head off to your daily excursion. We went on a boat trip through the spiritual Nitmiluk Gorge in Katherine, got friendly with wild birds at Alice Springs' Desert Park, and met opal-miners under the ground in Coober Pedy. 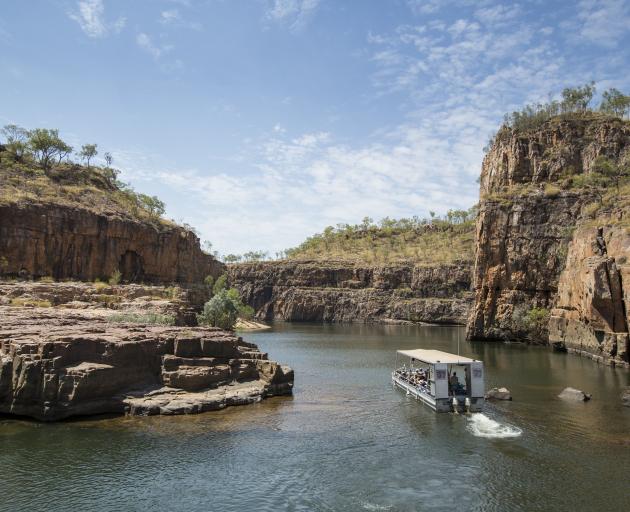 A tourist boat travels through the Nitmiluk Gorge, near Katherine, during a Ghan off-train excursion. PHOTO: GREAT SOUTHERN RAIL
Then back to the colonial-style Gold Service Outback Explorer Lounge bar for a friendly drink (there's an extensive Australian wine list), before starting your next round of eating (and chatting, and meeting your fellow travellers). At night, cabin attendants will have turned your bed down in your room and put a chocolate on your pillow.

I mean it's pretty easy for a guest to enjoy.

We loved sitting in perfect surroundings as we watched the desert from the comfort of the train, tootling from Darwin to Adelaide, ticking off some bucket-list items as we imbibed Aussie chardonnay or beer. 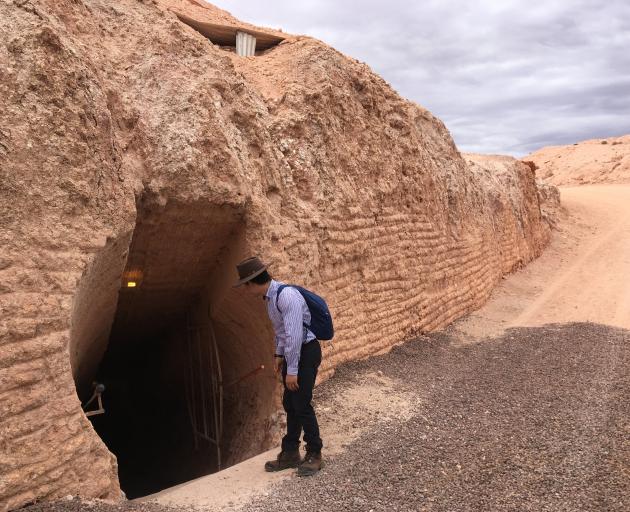 A Ghan host looks down into the underground Serbian Orthodox Church at Coober Pedy. PHOTO: PAM JONES
And we loved hopping out into the dust along the way, getting hit with a bit of heat, being whisked away in an air-conditioned bus, then exploring another corner of the Aussie outback.

We came back with opals, some leather, some kangaroo jerky.

And a reminder of the expanse of the great land of Oz.

Another time we might overland it in a hardy 4WD.

But this time what a treat to embrace the luxury of train travel. 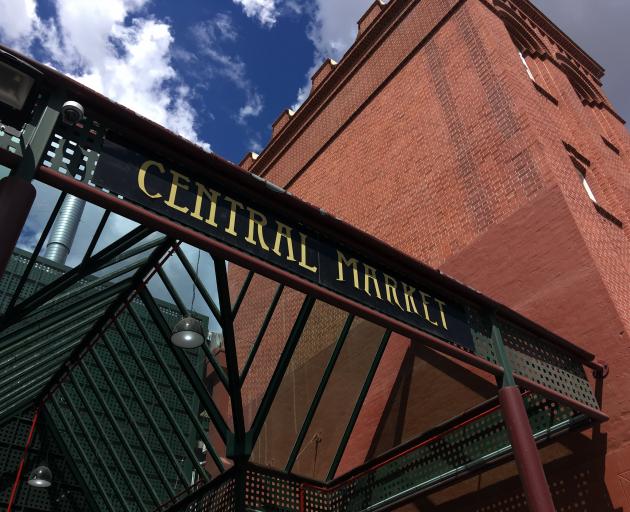 The Ghan travels various timetables year-long (except for December and January) between Adelaide and Darwin and has high season and shoulder season fares.

The Ghan is a three-day, two-night trip, while the Ghan Expedition (which travels only southbound) is a four-day, three-night trip.

For more information go to www.greatsouthernrail.com.au/trains/the-ghan

• Pam Jones travelled with the assistance of Great Southern Rail.