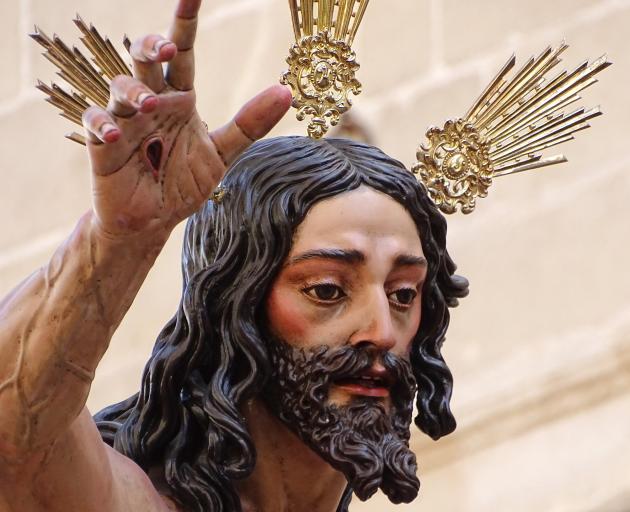 The Spanish city of Seville, with its stunning architecture, multi-layered history, rich culture and traditional tapas, was named the No1 city to visit in 2018 by Lonely Planet.

We decided to go at Easter when, in addition to everything that goes on there year-round, the Semana Santa Sevilla, one of the largest, emotionally-charged religious festivals in the world, was under way.

The core events in Semana Santa are the processions of the hermandades and cofradias, or brotherhoods.

Starting on the afternoon of Domingo de Ramos (Palm Sunday) and continuing until the morning of Domingo de Resurreccion (Easter Sunday), nearly 70 brotherhoods comprising 100 to 3000 nazarenos (penitents) wearing medieval robes and conical pointed hats (yes, they resemble the Klu Klux Klan, but there is absolutely no connection) set off from their home church or chapel accompanying life-sized religious effigies and colourful misterios (tableaux of Bible scenes) on elaborately-decorated pasos (floats) through the old city to the Cathedral of Seville and back again. 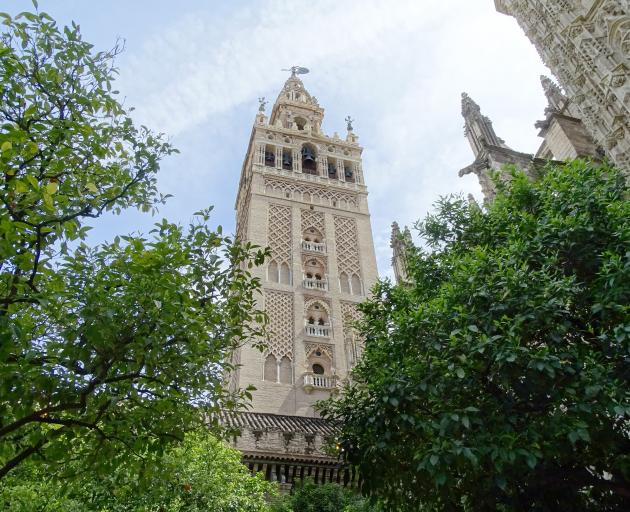 The Giralda tower attached to Seville Cathedral.
Each procession has a float depicting Christ's last days and a second float dedicated to the Virgin Mary. Some of the larger processions can take up to an hour and a-half to pass and those from the suburban barrios can take 14 hours for the return trip.

We arrived in Seville two days before Palm Sunday. As our taxi entered the old quarter of the city, final preparations were well under way for the week-long festival with road detours in place and stacks of portable chairs at intervals along the pavements. What we thought of as ''free seating'' turned out to be reserved seats booked months in advance. In the next 48 hours, rows of them would be set up in roped-off sections along the official route from Calle Campana to Plaza Virgen de los Reyes by the cathedral. Access was by ticket only and, as we were to discover, strictly enforced.

After navigating our way around plazas and down narrow one-way streets, we arrived at the entrance to our apartment, situated only a few minutes' walk from the cathedral, and our home for the next 10 days.

Unfortunately, the sky was overcast, spitting rain and the temperature was chilly, something we weren't expecting at this time of year. Our host, Sylvia, said spring was very late arriving and it had rained every day for past three weeks, but the forecast was for the showers to clear before Sunday. The Santa Semana is cancelled if it rains - or even threatens to rain - as many of the floats date back to the 16th and 17th centuries, are highly ornate, painted in gold or silver, and feature elaborately carved wooden figures, some of which are of great antiquity and are considered artistic masterpieces. 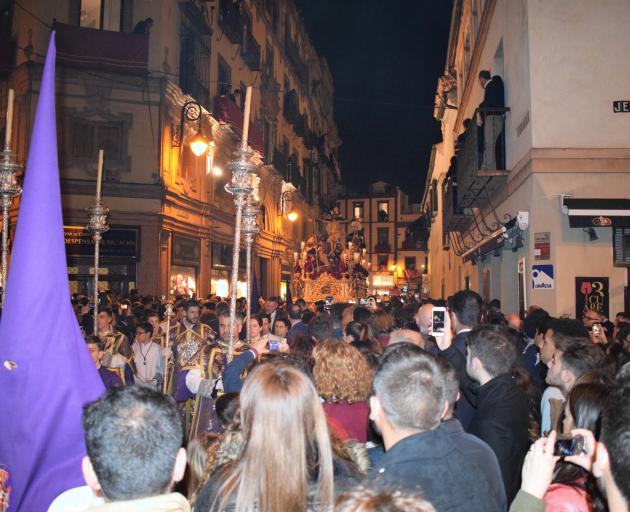 Processions go through night.
After travelling for 44 hours door to door (Queenstown to Seville), our first priority was to take a shower, get some fresh air and food. We happened to spot a bar-restaurant around the corner from where we were staying and it was jam-packed - always a good sign. My husband can speak basic Spanish, so he ordered us marinated potatoes, ham croquettes, salted cod in tomato sauce and a cold tomato and garlic soup. Still in that surreal state of disconnection from not getting enough sleep and travelling through multiple time zones, we were content to watch the locals going about their customary lives, all the time reminding ourselves that we were now in Spain.

The next morning we decided to get a sense of Seville's old city and followed a walk suggested by Lonely Planet around the perimeter of El Centro.

On the way, we passed the entrance to the Moorish Royal Alcazar, Spain's largest and oldest palace-fortress, but seeing the long queues we put it off for another day. We did our best to follow the route but the maze of alleys, a lack of street signs and the questionable accuracy of our tourist map made it difficult. In the end, we opted to follow the spirit of the walk and wander down narrow, cobbled streets that looked interesting. 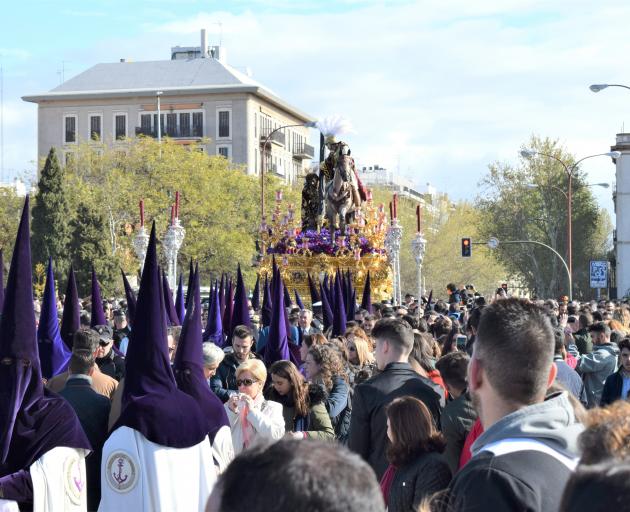 La Esperanza de Triana returning across the bridge to its church.
By chance we came to Plaza de La Encarnacion with the startling modern architecture of the Metropol Parasol, known locally as Las Setas de la Encarnacion (the Mushrooms of Incarnation), a giant wooden structure.

The next day was Palm Sunday, the Semana Santa was due to start in the afternoon and it was still raining. We spent the morning visiting two grand 15th-century houses - the Palacio de la Condesa de Lebrija in Calle Cuna and the Palace of the Adelantados Mayores of Andalusia (better known as the Casa de Pilatos).

By lunchtime, blue sky had started to appear between the clouds. We found an outdoor tapas restaurant in the Plaza Pescaderda and as we ate we noticed the plaza was rapidly filling up with families all wearing their Sunday best. We discovered later that it is a tradition during Holy week for Sevillians to dress elegantly and to wear a new piece of clothing for the first time on Palm Sunday, Holy Thursday and Good Friday as a symbol of mourning. On Holy Thursday and Good Friday the women dress in black with a black lace shawl or mantilla.

Then we heard it, a deep thudding of drums and the mournful wailing of trumpets coming closer. It was a sound we were to hear repeatedly over the next seven days and nights as two or three marching bands or small orchestras accompanied each procession, the notable exception being the El Silencio brotherhood. 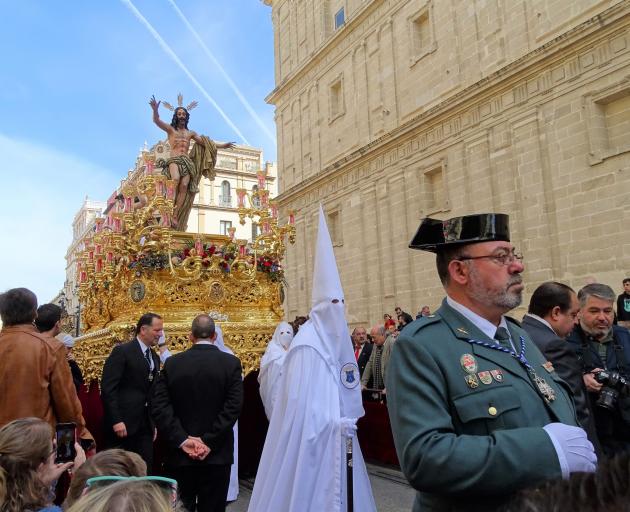 Easter Sunday morning and the last and only procession on Domingo de Resurreccion.
The plaza emptied and the crowds surged down the nearest street. We joined the throng and emerged at one end of the Plaza Nueva just as La Paz (The Peace) brotherhood, the first procession in Semana Santa, was entering from the other side.

The first thing we saw was a float carrying a life-size Jesus swaying from side to side. The crowds quickly parted to make way for a penitent carrying the Cruz de Guda (guiding cross). He was followed by the first of the nazarenos - men, women and even children walking in pairs and all wearing a hood, tunic and belt in the colours of the La Paz brotherhood as well as a tall, pointed hood with eye-holes known as capirotes, which allow the faithful to repent in anonymity.

Many of the nazarenos gave out sweets or cards to children in the crowd. At dusk and during night processions, candle bearers give out wax, which is kept and put away at the end of the week and added to every year.

As the float made its way towards us, the crowd fell silent. The only noise was the shuffling of feet belonging to the team of costaleros (literally ''sack men'', for their distinctive and functional headdress) hunched in rows underneath the float, bearing the paso on their necks and shoulders. Teams of 30-40 costaleros carry the religious floats for hours on end, at times, on their knees. It is a titanic effort, as not only do some of the floats weigh up to a tonne but they have to enter or exit the narrow doorways of the churches and navigate narrow alleyways with tight corners. Their efforts were always warmly applauded by the crowd. 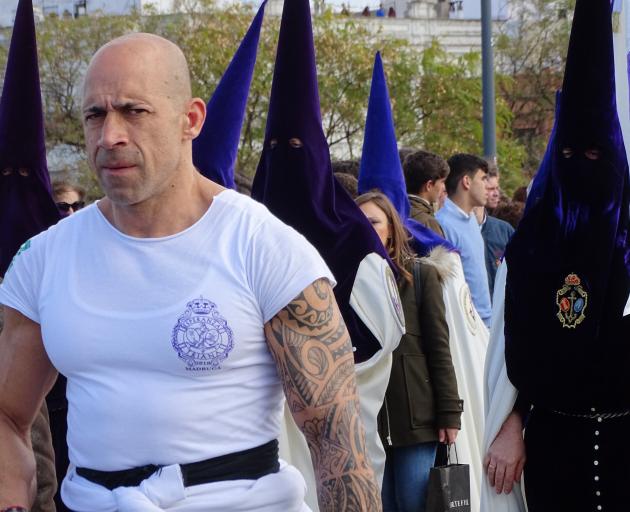 A costalero takes a break as La Esperanza deTriana crosses the Triana Bridge.
Some spectators reached out to touch the ornate wooden sides of the float, while others looked with adoring eyes at the tableau depicting the moment Jesus was handed the cross for the first time. Neither my husband nor I are Catholic or indeed religious, but we were totally mesmerised by the emotionally-charged scene.

The accompanying band suddenly struck up its melancholy tune. More nazarenos followed, this time wearing the same habit, but no hoods and carrying a black cross, some carrying two, and some walking barefoot.

It took an hour for the long snaking line of 1700 participants to go past before the arrival of the float carrying the Virgin Mary. As the hauntingly sad face of the Virgin wearing her gold-embroidered gown went past, some in the crowd shouted ''Guapa!'' (Beautiful!)

We were to experience many more dramatic and emotionally-charged moments during the next seven days and nights. It is physically impossible to watch every procession, as six or seven set off every day at different times from different churches around the city, but there are plenty of free programmes and websites to help you decide which ones to watch and the best places to see them.

A cautionary note: Semana Santa Sevilla is not a festival for anyone who suffers from claustrophobia or has a fear of crowds, as you are literally jammed shoulder to shoulder in a tightly-compressed mass, often shuffling along, and having to squeeze through the narrowest of gaps to make your way through. Up to a million people are estimated to line the streets during the Semana Santa Sevilla, but at no time did we ever feel frightened or in danger.

Semana Santa was an extraordinary week full of pageantry, music, art, culture, tradition, theatre and raw emotion that we will never forget, but in saying that, Sevilla has so much history, culture and other sights to see that the city ought to be on everyone's bucket list anyway.

-Kerrie Waterworth is a Wanaka-based freelance writer and journalist.

Bravo. The Europe that people want to know more about - Latin, elemental.

El Cid was in Sevilla. He introduced the concept of kicking the bouquet, or bucket.