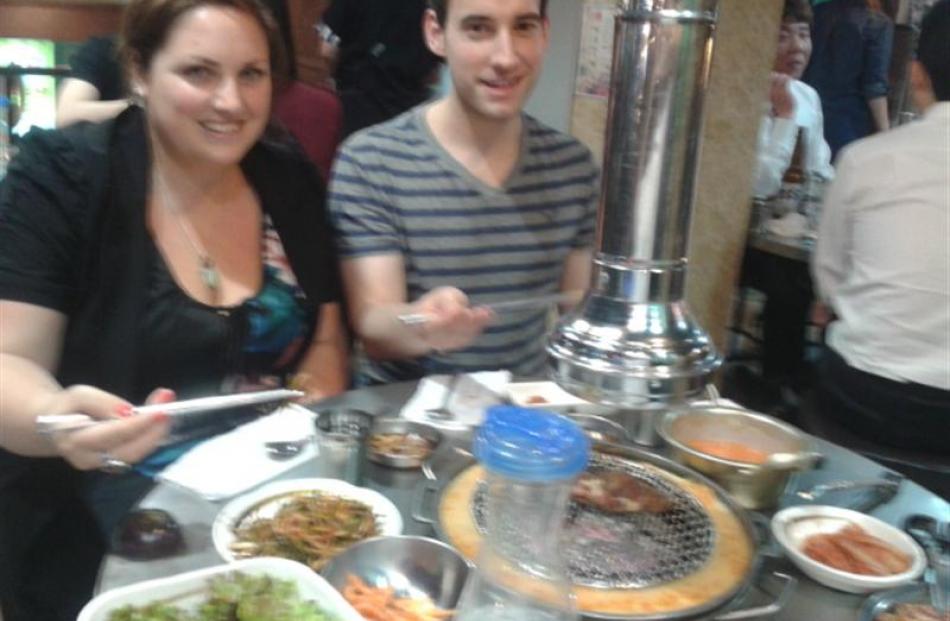 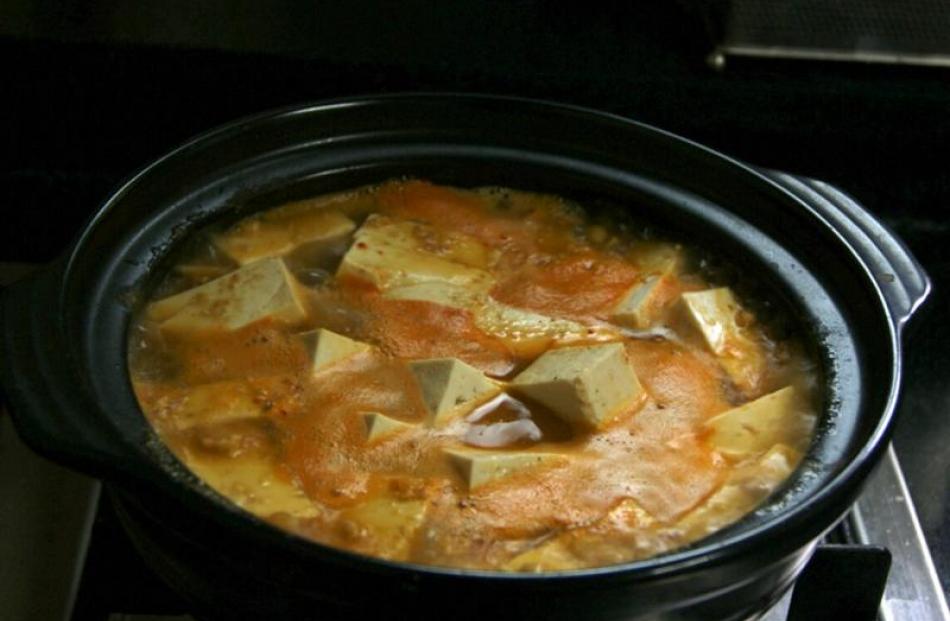 Tofu soup bubbling away on the stove. 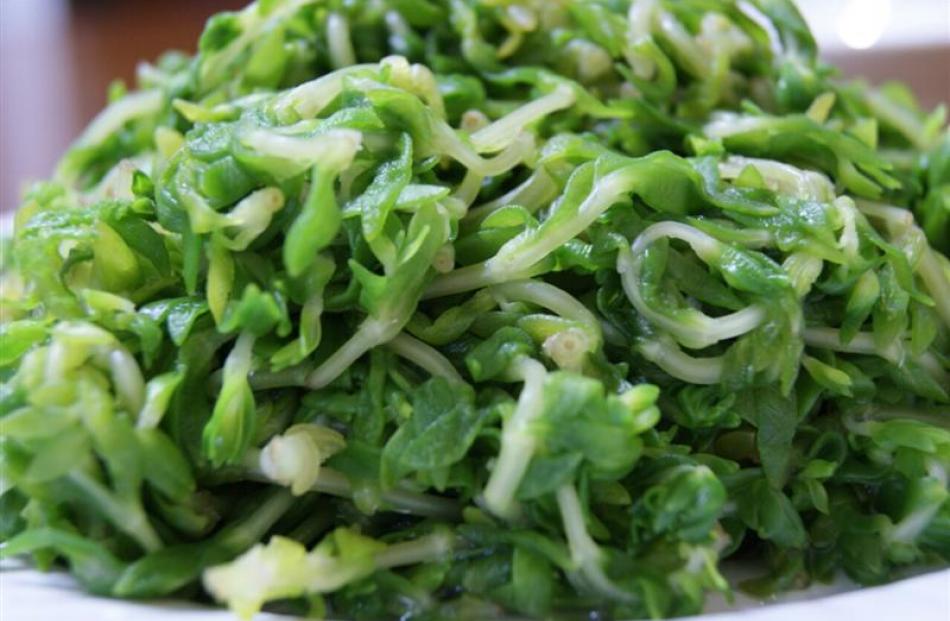 Some kind of sprout, just part of the daily menu. 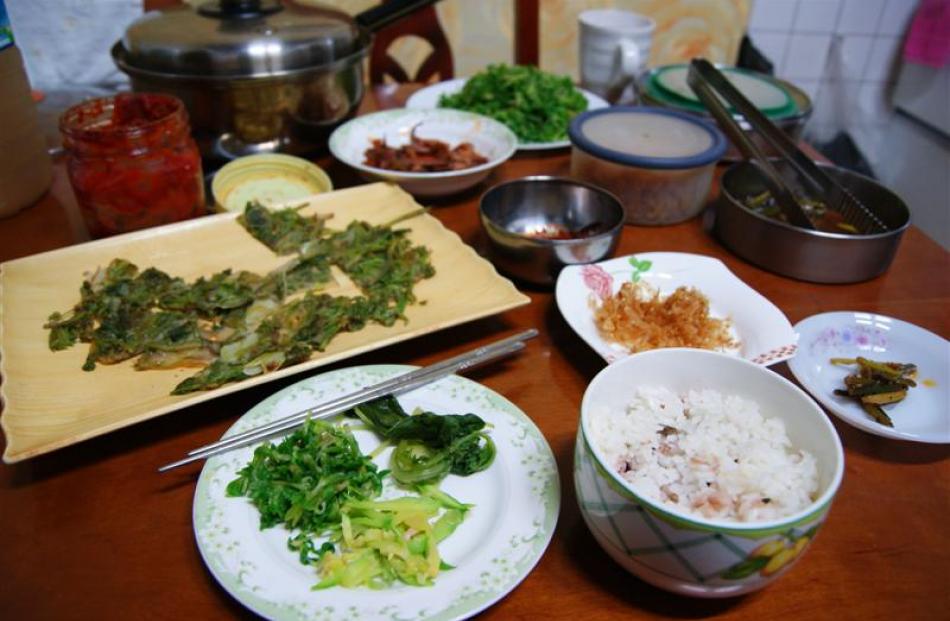 A typical meal at my homestay - clockwise from bottom right: rice, small plate with helpings of various veg, Korean pizza, chilli paste, chilli squid, sprouts, some other kind of veg, dried squid, and in the middle, a dipping sauce for the pizza -... 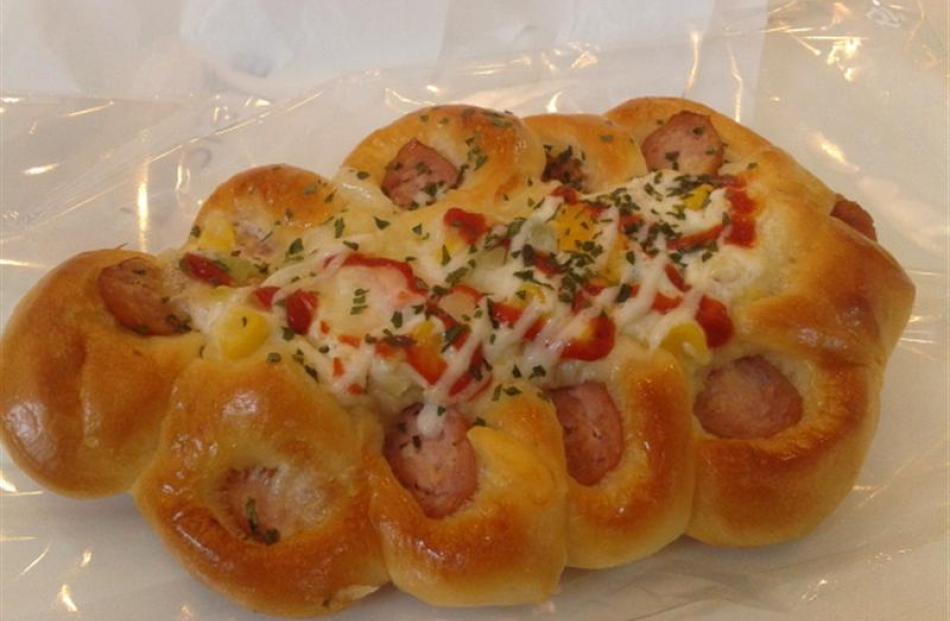 ODT reporter Sarah Marquet blogs about life in Seoul, Korea. With funding from the Asia New Zealand foundation, she will be working in the newsrooms of one of South Korea's largest papers, the Joong Ang Daily, for the next six weeks.

This is the inevitable food blog that everyone seems to have been asking for. Those that really know me know that I can be quite a fussy eater and some probably wondered if I would survive on Korean food or whether I would frequent western-style cafes and restaurants.

Well, after a week in a Korean homestay, I can report that my tastebuds have been well and truly tested. I have unknowingly tried foods that I most probably wouldn't have tried at home and will be disappointed if I leave without some recipes.

Before I came here all I really knew of Korean food was kimchi (fermented cabbage) and BBQ. As it turns out, cabbage is not the only vegetable used to make kimchi. That's what I think I am being told anyway, my Korean is appalling.

Every vegetable dish, always served cold, seems to be referred to as kimchi but as far as I can tell, not all are fermented - some are pickled, others are stewed in some kind of liquid that I still have not sussed out - sesame oil, fish sauce and maybe soy sauce and probably more.

Everything, no exaggeration, is covered in chilli sauce.

At my homestay, there are several kinds of veg and rice served up three times a day. All are placed on the table and, if it is a fresh batch, you take a wee pile of whatever you want and put it on a wee plate of your own. If it is not such a fresh batch, if there is only a bit left in the container, you all dip in and out that container, just like sharing a plate.

Sometimes there are little extras such as a steamed egg with baby shrimps, a grilled fish, or "Korean pizza" as my homestay family call it - basically, when there is only a wee bit of whatever veg dish left in the fridge, the mother mixes up a batter of rice flour and egg, mixes in the veg and fries it like a pancake.

They usually put a small bowl of water on the table for me to wash some of the chilli off my veg before I eat it. They laugh at me for doing so but everything is quite spicy by New Zealand standards.

While the fish and such comes from various markets, all the veg comes from the family's garden - something quite unusual in Seoul.

About an hour's drive from home, they have a garden. I have yet to see it but assume it is quite large as they sometimes refer to it as a farm.

All the veg consumed in this house comes from that garden and the parents spend their weekends there tending to their crops. It is more expensive than buying from the markets but they say it is healthier.

At first, I was rather overwhelmed by all the new flavours and foods and I quickly learned to try first, ask questions later. Dried squid, just one accompaniment to our meals, is now something I have with breakfast, lunch and dinner when dining at home.

When I first tried it I thought it was fried onion and I am glad I didn't ask what it was till later in the day because if I had know what it really was, I probably would have been a bit wary of eating it.

Toenjang, a soup made with tofu, soy beans and soy bean paste was the new thing today - I have a feeling the family might be testing me by dishing up something new most days.

It tasted like nothing I have ever tried before and I have no idea what to compare it to. It's a bit bitter, a bit sweet and a bit something else. If you haven't already tried it, you will just have to trust me when I say it was oddly delicious.

As I work each day though, I don't often have three meals at home which gives me an opportunity to try other things.

There is a bakery near the office, Paris Baguette (it's actually a large chain) that always has such weird and delicious looking baked goods in the window.

Though I am not meant to eat gluten, I had to try something so I chose the weirdest looking thing - some kind of sausage bread.

Korean bread is full of sugar and almost sickly sweet which, for two reasons, is actually a good thing - because I shouldn't be eating bread anyway, and because Korean food is far cheaper than western food here.

For the same price, you can buy a plate of dumplings and a huge bowl of food such as bibimbap (rice and veg smothered in chilli sauce) or naeng myun (cold buckwheat noodle soup with veg and, of course, lots of chilli) from a Korean restaurant.

So, while I expected to be missing food from home, the only I really crave is fresh fruit and veg. Fresh fruit is sold at local markets but it is not the same as at home.

We cut up a watermelon last night but it wasn't juicy, it was almost dry.