I love rolling through the tightly folded steep-sided hills and starkly contrasting curvaceous hummocks, created by lahars, of the King Country. Wedged between Waikato and Taranaki, this eye-catching pocket of our heartland had lured me to its bosom, primarily to sample the much-buzzed-about offerings of Forgotten World Adventures. Based in Taumarunui, this incredibly enterprising tourism venture boasts a compelling platter of soft adventure excursions, prising open the stories, legends and unspoilt scenery of our hinterland.

Taumarunui’s official slogan is "Where Adventure Begins", a catchy little tourism tagline that embodies the essence of Taumarunui’s visitor pull.

My adventures began with the tumultuous April weather, which threatened to sabotage my best-laid plans to plunge into the Forgotten World. Mercifully, the weather gods relented and my first assignment was to sample riding the rails of the old and decommissioned railway line connecting the King Country with Stratford. 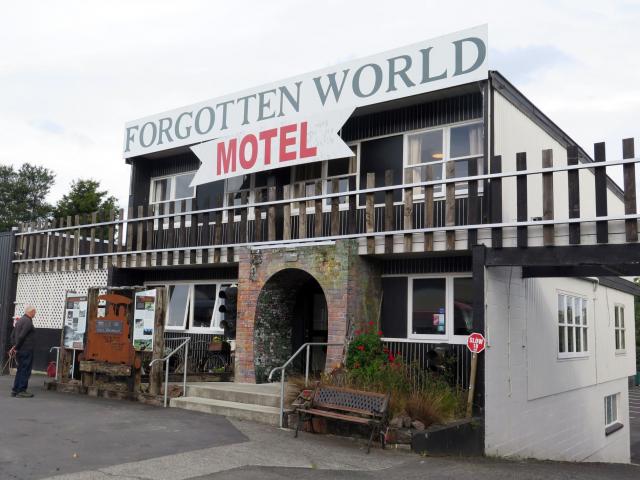 The Forgotten World Motel.
Taking 32 years to build, the Stratford-Okahukura Line (SOL) finally opened in 1932. Working gangs sawed and blasted their way through the bush-draped hinterland to lay the tracks of this steel artery. The line had been commissioned to transport products from the emerging farming, coal and logging industries.  At its peak, there were 15 stations in operation on this line. Now, concrete platforms serve as sobering memorial slabs to a bygone age.

Forgotten World Adventures has reopened 142km of this retired line, including 24 tunnels and 92 bridges. You’d be hard-pressed to find a more scenic decommissioned railway line. The pioneering founder of Forgotten World Adventures, Ian Balme, was a Waikato farmer who dared dream big, turning a mothballed rusting eyesore into a visionary business. Since 2012, staff have grown from 3 to 38. Five years ago, he secured a 30-year lease with KiwiRail to operate semi-guided tours along the line between Okahukura and Stratford.

Just out of Taumarunui, the old Okahukura railway overbridge has been dismembered. It’s the only chunk of the line that has been physically removed. So all the excursions start at the railhead, just past the remains of the old overbridge, and customers are shuttled to the starting point, just 10 minutes from Taumarunui. 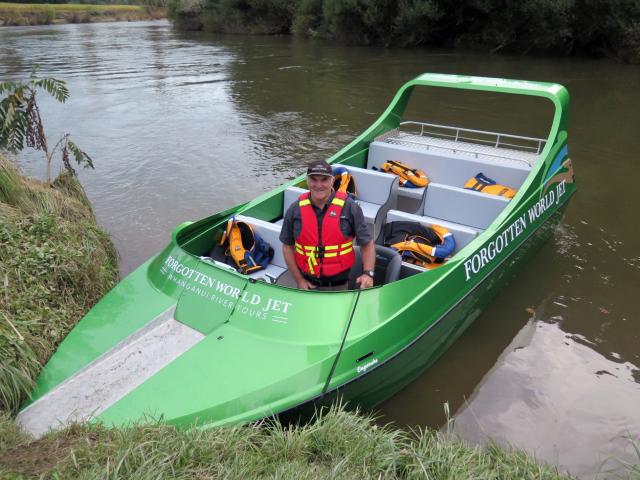 Robert Carter, of Forgotten World Jet, on the Whanganui River.
I joined the daily 5 Tunnel RailCart Tour, which is a four-hour return romp along the abandoned railway line. I was struck by the mounds of pumice and mud that had been painstakingly removed from the tracks, after ploughing down hillsides in the recent rainstorms. Half the railcarts had been buried in pumice. Our guide remarked that the prohibitive costs of constant track maintenance underpinned KiwiRail’s decision to pull the plug on the line’s operation in 2010. At the obligatory safety briefing, we were given a beginner’s guide on how to "drive" the railcarts.

"There’s the accelerator, the brake’s the pedal with ‘stop’ written on it, maintain a following distance of about two bus lengths and don’t try using the steering wheel unless you want to go off the rails."

Instead of brake lights, our group was advised that when slowing, we needed to signal our deceleration to the cart behind us by flapping  our arms out the sides of the cart, like a bird’s wingspan in full flight. Similarly, when coming to a stop, we were to hand-signal accordingly.

This is certainly no train ride, but a unique self-drive rail journey in converted golf carts. Petrol-powered and limited to a top speed of 22kmh, these souped-up golf carts originate from Arizona, but given the lush and vivid greenness of the surrounding landscape, they certainly don’t look out of place. I was half expecting a vast fairway to appear on the horizon. A dozen fellow cart riders comprised our convoy, which was led by a guide, who kept an eagle eye out for any debris on the track. The guides are exceptional hosts, informative and effusively passionate about the region’s rich heritage.

The commercial glory of the Forgotten World region may have faded but the wrap-around scenery is deliriously drool-worthy. Volcanoes press at its either side, state highways swirl around it, but the heart of the Forgotten World is a bucolic, and at times, rustic treat. Animals vastly outnumber people in these parts, as we tootled by goats, deer, alpacas and happy herds of cows on elevated pastures, surrounded by superlative views. In quintessential New Zealand style, a vast flock of sheep were being shifted along the nearby road, dutifully under the guard of crowd-wrangling sheepdogs.

Clattering along the tracks in our carts, curling through valleys and creased hills, we traversed lichen-covered bridges spanning rivers, while more lichen streamed down from trees like confetti.

The verdant countryside is sprinkled with clutches of ramshackle houses and dilapidated farm buildings, strutting the skyline as reminders of the region’s boom times, when primary industries such as timber-milling and coal-mining thrived. When in season, you can even pick wild blackberries, blueberries and apples from the railway line.

It’s sobering to reflect on how dramatically the population has changed in some of these settlements.

When the railway opened, Tangarakau had a bustling population of 1200. At last count, this ghost town now has just eight residents. We stopped for scrumptious home-made snacks and a hot cuppa in the sleepy village of Matiere. It’s still home to around 40 residents, and housing is dirt cheap.  A rating valuation of $15,000 is not uncommon. A couple live in the former Catholic church, which they bought for $1100.

At its peak, 80 years ago, Matiere had a population of 750, built on sawmilling and farmers breaking in land. This pioneering town once included a dairy factory, three general stores, two butchers, two drapers, a tailor, bank and post office. Some of the remaining main street houses have the most sublimely colourful front gardens.  Information posts along the route, complete with historical photographs, illustrate how bustling many of these lineside communities used to be.

But the undeniable highlight of riding these storied rails are the tunnels. As the name would suggest, my 5 Tunnel Tour traversed five of the 24 tunnels on the railway line, including the only brick-lined tunnels laid by hand and the longest tunnel on the line, spanning 1500m. Apparently it comprises 3.5 million bricks!

Boring through these tunnels and admiring their damp jet-black walls, illuminated by the headlights on our carts was absolutely thrilling. It certainly pays to wrap up warm. They can be bone-chillingly cold. The 1500m tunnel, known as the Okahukura Tunnel, took 0 years to carve. Adding to its ethereal theatre, a thick mist draped the middle of the tunnel as we tootled through it, before re-emerging from the darkness into spectacularly sunlit native bush and farmland.

Rail travel has always exuded romanticism. The supreme sense of scenic intimacy is not matched by road travel, and the novelty of piloting your own passage along the tracks is an undeniable winner, reflecting as it does the Kiwi love affair with anything DIY.

The 20 Tunnel Tour is a 10-hour affair reaching Whangamomona. The Ultimate is a two-day tour spanning the full 142km length of the line, all the way to Stratford, after sleeping overnight in Whangamomona.

In addition to the railcarts, you can also try your hand at the New Zealand-made RailBikes, with side by side seating, on the 5 Tunnel and 10 Tunnel tours. Only a moderate level of fitness is needed. I also took a ride on the Forgotten World Jet for a flavour of the beauty, reverence and heritage of the Whanganui River.

My driver/guide was Robert Carter, a local legend who has been guiding visitors along the river for 35 years. He pointed out to me the astonishing amount of volcanic material, discharged by Taupo and Ruapehu, that has stamped its presence on the landscape. Mighty sandstone and mudstone cliffs flanking the river are mantled in volcanic ash. The clusters of conical hillocks that permeate the countryside are lahar mounds. Massive pumice boulders edging the riverbank are testament to the devastating force and reach of past eruptions. Some people may scoff at the recent decision to accord the river the status of a person, but Robert has always respected the Whanganui River’s undeniable life force.

Forgotten World’s new custom-built 15-seater jet-boat operates various excursions including a 232km return journey to the Bridge to Nowhere, and on the multiday excursions, it will  zip you all the way down to Whanganui. In fact, Forgotten World Adventures operate the longest commercial jet-boat rides in the southern hemisphere.

If you’re taking an overnight excursion, spend a night in the self-proclaimed Republic of Whangamomona and get your passport stamped at the legendary Whangamomona Hotel.  While in Taumarunui, my head hit the pillow at the Forgotten World Motel.

My well-appointed unit was clean, quiet and toasty, the beds are cloud-comfortable and there’s free Wi-Fi.

For further details on the full product range, visit www.fwa.co.nz