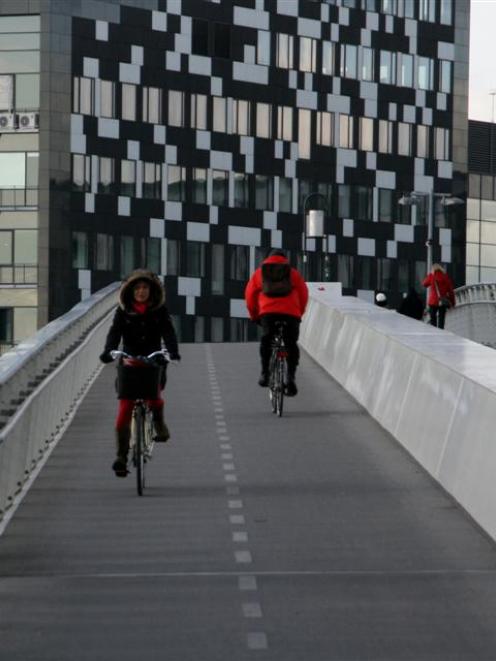 A bridge connecting Islands Brygge and Kalvebod Brygge in Copenhagen is all set up for cyclists. Photo by Mikael Colville-Andersen.
If I had ever actually run with the bulls through the streets of Pamplona, then I would be more certain. All I can say is that I think maybe commuting to work by bicycle in cycle-friendly Copenhagen is a little bit similar.

In Pamplona, you probably have the fear of being trampled from behind by a mob of angry beasts with horns.

I know for a fact that in Copenhagen you have the fear of being run over from behind by a horde of grim-faced office workers with bells.

In New Zealand, it is mostly motorists who are seen as the natural enemies of cyclists. Do away with them, and there should surely be peace on Earth.

But, Copenhagen demonstrated to my wife and I that if you take hardened, impatient commuters from behind the wheels of their cars and put them on bicycles, then they are likely to be just as hardened and impatient.

Copenhagen bicycle commuters gave off an unspoken but simple message: Get out of my way!

And, it applied equally to motorists, pedestrians and fellow cyclists.

We inadvertently cycled into central Copenhagen during early-morning rush-hour.

Two pannier-bag-carrying New Zealand tourists expecting a leisurely canter to the radhuspladsen found themselves instead enmeshed in a perilous headlong gallop - women in dresses, men in suits; not a helmet in sight.

Careering along narrow footpath-cum-cycleways, our commuter peloton was constantly weaving, veering, merging, condensing and expanding like a flock of starlings.

There should have been a crash.

The momentum barely altered as the peloton rounded cars, diggers and pedestrians parked on the cycleway.

Central Copenhagen felt like a city ruled by cyclists - its motorists and pedestrians subdued and perhaps a touch nervous of either running one over or being run down themselves.

It is a city where you really do need eyes in the back of your head or at the very least a reversing video camera.

And now, it seems, the beginnings of cycle-rule is being felt in Auckland.

It seems hardly credible that motorists should be intimidated by cyclists - a bit like the elephant being scared of the mouse.

But that is exactly what appears to be happening throughout Europe, as cyclists claim the moral and economic high ground and overrun city centres - adding a rolling metal maul to footpaths and roadways and a parked-up scrum of rusting metal to public open spaces.

It seemed as though cyclists had seized power by dint of numbers and an attitude that even when in the wrong they were in the right.

And it seemed motorists, in response, had become exceedingly, even excessively polite, to even the most dithery cyclist.

Cyclists - in European cities at least - now have the power, but your view on how well they exercise it might depend on how you travel.

• Reduced the risk of serious injury or death among cyclists by 50%.
• Increased the number of cyclists who feel safe from 57% to 80%.
• Increased cycling speeds by 10%.
• Reduced unsatisfactory cycle track surfaces to less than 5%. It also plans to add another 10,000 cycle spaces by 2013 to address inadequate parking.