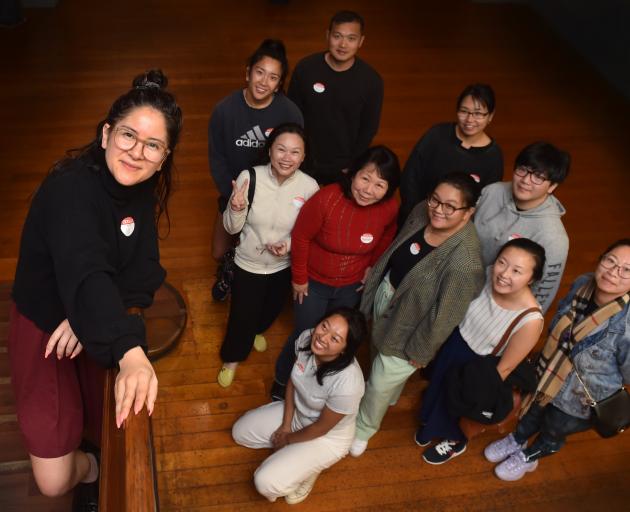 OTHER [chinese] director Alice Canton (front) during a group workshop with members of the Dunedin community for her Dunedin Arts Festival show. PHOTO: PETER MCINTOSH
A documentary theatre project coming to Dunedin will bring into focus the many forms of cultural misrepresentation, discrimination and invisibility that exists around Chinese identity.

The award-winning OTHER [chinese], which will feature in the Dunedin Arts Festival next week, explores what it means to be Chinese in Aotearoa and invites real people to share their stories.

Director Alice Canton said, since the show premiered in 2017, people were starting to understand how identity politics was intersectional for black people, indigenous people and people of colour.

That means their political identities including, gender, race, class, sexuality, religion, and disability, combine to create different levels of discrimination and privilege.

That understanding was accelerated by conversations around the Me Too and Black Lives Matter movements and the rise of tino rangatiratanga and indigenous sovereignty.

But, on the other hand, nothing had changed, Ms Canton said.

"The scapegoating of Chinese people over Covid-19 and the rise in anti-Asian racism is horrific. The violence and hatred reads like a shocking headline from some rickety 19th century propaganda."

There was also a lack of meaningful representation of Chinese and Asian people in media, both fictional and news media, Ms Canton said.

"It reduces a mainstream understanding of who we are, and why we are, which limits the opportunity to see us as complex people and increases prejudice."

OTHER [chinese] would challenge those forms of cultural misrepresentation, discrimination and invisibility around Chinese identity, she said.

A group of participants from the Dunedin community, who are Chinese, attended workshops this week, where they were asked what it means, to them, to be Chinese.

Their stories will become the centre of the show, woven together with clips from the media and interviews with prominent Chinese New Zealanders.

Ms Canton said the experiences of Chinese people in Dunedin were different from those living in the country’s larger, sprawling cities, including Auckland.

There were fewer Chinese people in Dunedin which created "hyper-visibility".

"The positive side of hyper-visibility is a more targeted effort to acknowledge and include Chinese people into the fabric of the local community.

"The negative is the contrast of difference, perceived or otherwise, which amplifies the sense of otherness."

There were many under-represented stories within the Chinese community and it was important people were checking their privilege and ensuring everyone’s voice was heard, she said.