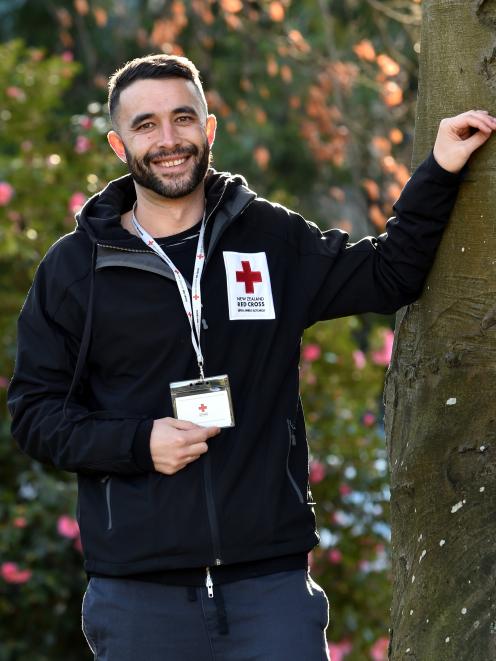 Now the University of Otago bachelor of social work graduate is playing a key role in the resettlement of former Syrian refugees in Dunedin.

Originally from Turangi, the Red Cross social worker said he imagined he would spend his whole life there.

"I had small town syndrome. I never thought it would be a possibility to go to university."

After trying his hand at farming, hospitality and retail work, he said it was obvious he needed to make a change.

"My siblings were working and studying at the university and on their encouragement I moved down from Turangi and lived with them."

In 2009, he began a bachelor of arts degree majoring in sociology.

However, he quickly realised social work was what he "needed" to be studying.

"She worked two jobs and always volunteered for services like St John. 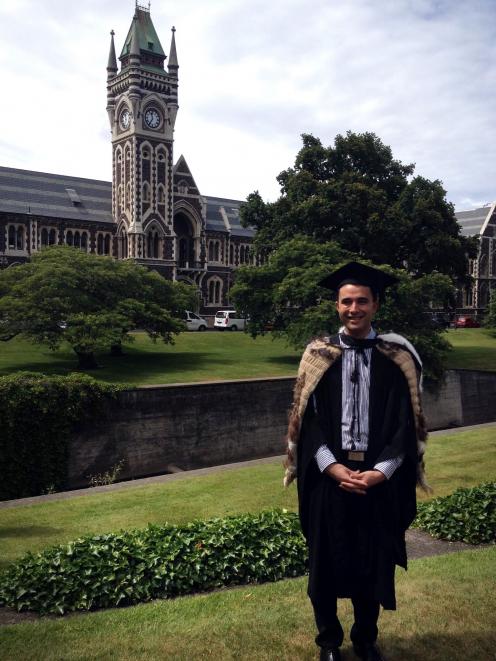 Nick Callaghan after graduating with a bachelor of social work degree from the University of Otago in 2013. Photo: supplied.

"Where I am now is a credit to my upbringing.

"I wanted to do something that would benefit the community.

"It is a bit cheesy, but I wanted to serve.‘‘I didn’t have the grades for med, I didn’t want to do nursing; social work was always the right path, I think."

While studying, he completed two work placements at Youthline Otago, developing a strong relationship with the organisation which he still maintains today as a member of its governance board.

He acknowledges having a particular soft spot for the Youthline Otago organisation.

"I love that organisation, it’s really important to me.

"It’s for the community, it’s confidential, it’s using interfaces as opposed to face to face.

"So it’s adapting what our youth are using to fit their needs for getting support."

He says his first job after graduating in 2013, at Ari Te Uru Whare Hauora, a Maori health and social health education service in Caversham, put his recently acquired skills to the test.

In that role, he worked with families with histories of domestic violence, addiction and financial hardship to help them get "on the right track".

"That might have been getting them free of family violence, getting into university, helping them write a budget."

The work was challenging but "incredibly rewarding" and it was only when the opportunity to work with former refugees arose that he considered leaving.

In March,  he began working with the Red Cross on the Pathways to Settlement team as a social worker, a role he did not expect to get the chance to fill.

"I’ve never been overseas before so I didn’t think I would get it."

While not having been exposed to cultures around the world yet, he is heavily ensconced in his own.

"I have got strong kupapa Maori values.

"I bring some of that to the work I do."

There are similarities between Maori family units and Syrian ones, he says.

"In New Zealand, and Western society, we look at family as a nuclear unit.

"In my own upbringing, we were raised with large family structures, and that’s relatable to our Syrian brothers and sisters.

"It’s your uncle, aunt, mum and dad and maybe that neighbour across the road.

"I have an affinity to that model."

His role sees him use a multicultural framework and the skills he learnt at the University of Otago as a social worker to help Dunedin volunteers work with the former refugees.‘‘The stories I hear from our volunteers are really empowering.

"To be able to assist them to do the amazing work they are doing is a real pleasure."

The job has been emotional from the beginning, he says.

"Meeting the whānau [Syrian] beforehand in Mangere, telling them about Dunedin, telling them it’s a wonderful place, then seeing our volunteers and the Dunedin community come out in force at the airport and seeing the Syrian families acceptance of that welcome was like, ‘Wow’ ...

Five months into the job, he said, was when he realised it was not an encyclopaedic knowledge of the globe, but rather humility which was important when working with people displaced by war.

"It is about being a person, being genuine, being compassionate and being honest.

"I’m not going to fluff it up. A lot of people these days don’t listen."

He says he has learnt to be patient, particularly with those who do not speak English as a first language.

"I have already learnt so much from this job.

"It is what we do. We open our doors to people."

In the future, he hopes to use what he has learnt "on the ground" to address "macro" social issues.

"The social work department at Otago is right on point," he said.

"The praxis work, and that knowledge base that the lecturers have got is inspiring, I would like to return to it."

While his work focuses on helping make Dunedin a home for others, he has realised that in doing so he has also made it his own new home.

"I was expecting to move home after university, but it’s a vibrant city, it’s affordable, it’s diverse and tolerant and now it’s my home."

Name of course at the University of Otago: Social work

Favourite memory of living in Otago: My favourite memories involve living with my brother Kerry, my sister-in-law Hailee and niece Maraea. Kerry and I would drop Hailee off to her job at university, Kerry would sometimes go to early lectures in the morning and I would sometimes walk Maraea to her early child-care centre, which was on campus, before going to uni.  Really enjoyed those times. Made uni accessible and whanau-centred. Kerry and I would often take Maraea into lectures too and our lecturers were all good with that.