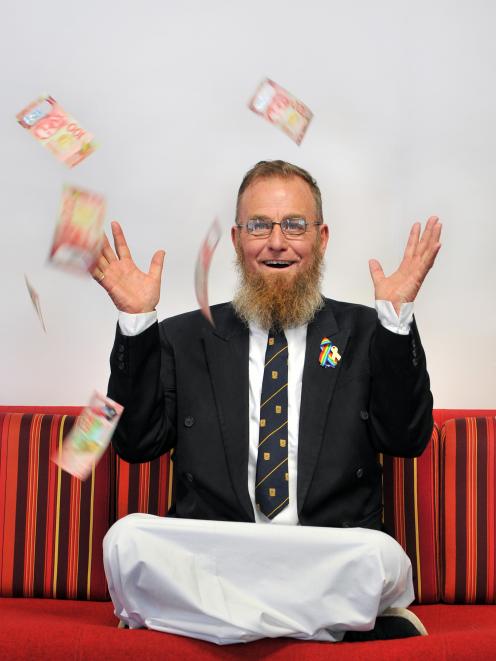 New Zealand Education Foundation director Paul Gourlie with $1000 he never knew he had. PHOTO: CHRISTINE O’CONNOR
Can an apparent bank scam ever become a rare windfall?

Mr Gourlie’s suspicions were initially raised when he received an unsolicited telephone call, purportedly from the Westpac South Dunedin branch, several weeks ago, towards the end of the Level 3 coronavirus lockdown.

These days he banked at Kiwibank, and knew banks seldom rang customers, so he suggested ringing the caller back.

He also asked for some specific financial details from his account, initially said to be under his name in Christchurch, to confirm the caller was genuine.

Mr Gourlie lived in Christchurch from 2003 to 2011, when, after the second big earthquake, he moved to Dunedin with his mother, Geraldine Gourlie, then 88.

After inquiring further about bank deposit details, he remembered this was a small account he had used for charitable purposes in Christchurch.

And he discovered more than $2200 had been sitting in an account he had forgotten about completely, the money growing through interest payments.

Westpac South Dunedin manager Allen Anderson said the call to Mr Gourlie by bank customer service representative Grant Reid was among tens of thousands made to Westpac customers throughout the country, offering to help with banking needs - and sparking positive feedback - when banks were largely closed, during the lockdown.

Mr Gourlie is a director of the New Zealand Education Foundation, which supports tertiary students, helping them overcome problems with bureaucracy, including visa issues for overseas students during the pandemic.

He withdrew $1000 of the funding for charitable purposes yesterday and said "it’s a blessing".

"It’s a wonderful tohu [award, sign] - a wonderful sign and gift at just the right time," he said.