‘Great turnout’ at Party in the Park 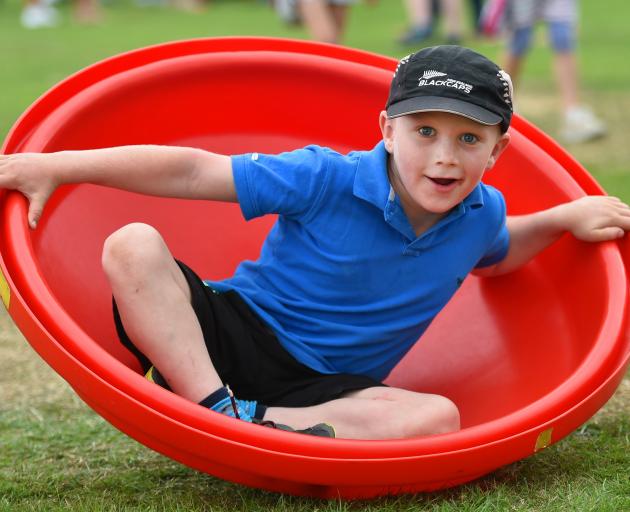 William Evans, (8), of Mosgiel, in a Dizzy Giddy at the Silverstream Primary School’s stand at the Party in the Park yesterday afternoon. Photo: Gregor Richardson
Mosgiel's annual Party in the Park attracted thousands of visitors yesterday, with the combination of 90 stalls, helicopter and children’s rides and fundraising events ending five days of celebration during the Festival of the Plain, which started on Wednesday.

For the first time the free event was switched to Peter Johnston Park in Mosgiel, co-organiser Kelly Ennis said.

"We wanted to expand the flagship event, so switched to Peter Johnston Park ... It was a great turnout," Mrs Ennis said.

On Saturday night there had been a sold-out Mosgiel Business Association black-tie fundraiser. Earlier in the week there was a  "high tea" at Chatsford Retirement Village, several quiz and movie nights, a business breakfast, workshops and a tennis tournament, Mrs Ennis said.

"We’re really wanting everyone in the community to be involved," Mrs Ennis said.

The crowd enjoys the day. Photo: Gregor Richardson
There were about 90 stalls at Party in the Park,  including 12 schools, preschools and home-based carers, all of whom had been encouraged to use the event as a fundraiser, plus craft and food outlets, Mrs Ennis said.

Some attendees estimated thousands went through the park, which was full for much of the day, with light rain holding off until the final participants left for the day, by about 5pm.

Mrs Ennis said 15-minute flights with two helicopters from Highland Helicopters was especially popular, as were all the children’s rides and entertainment.

"It was packed all day — people came along and tended to stay for several hours," Mrs Ennis said.

She expected the event to keep growing in the years ahead and hoped "the many offers of voluntary help" during the past five days could be taken up.