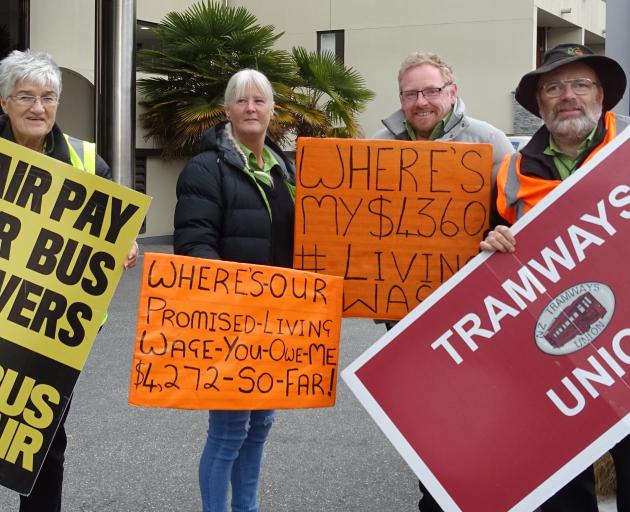 Rallying outside the Novotel Hotel in Queenstown to convince Otago regional councillors to implement a long-delayed pay increase are (from left) Marlene McDonald, Tania Cuff, Steve Hansford and Peter Dowden. PHOTO: MATTHEW MCKEW
Bus drivers celebrated a "hollow victory" yesterday when the Otago Regional Council said it would backdate a pay rise meant to have come last July — but failed to say when.

The council committed to paying Orbus drivers the living wage of $22.10 an hour by July 1, 2020, but has since dragged its heels on implementing the increase.

Yesterday, four drivers from Dunedin travelled to Queenstown — where councillors met at the Novotel Hotel for a full council meeting — to once again protest for action.

Councillors agreed to increase the base wage rate to align with the living wage and to back pay drivers to July last year.

But it is not clear when exactly that will happen.

ORC chairman Andrew Noone said implementing the back pay and pay rise would need to be confirmed in contract negotiations with the council’s public transport operators, before the living wage could take effect.

"We recognise that driving buses is a challenging and at times stressful job.

"Our drivers were essential workers during lockdown — they have adapted to changes like the mask mandate, and we know they have put up with higher rates of abuse in the last year," he said.

Bus driver Marlene McDonald called it a "step in the right direction", but fellow driver Steve Hansford warned it was a "hollow victory".

"I think we need to be fair ... There is immense frustration, but also a promise today means we are getting back paid," he said.

A pay rise was vital in recruiting and retaining staff, as some drivers were working 70-hour weeks to fill the schedules, Mr Hansford said.

"Bearing in mind $22.10 an hour is not going to solve the driver shortage — it’s just a step in the right direction.

"You get paid more to drive a sheep than a human life in this country — a sheep is worth more than school kid," he said.

Bus driver Tania Cuff said many drivers had a strong sense of loyalty to their passengers and colleagues, meaning they were pushing themselves to work long hours to ensure services ran.

All four drivers were concerned by the number of bus drivers quitting and suggested the problem would get worse when tourism returned.

Mr Hansford said tour bus drivers could earn around $30 an hour and Queenstown bus services would be particularly hit when visitors returned in numbers.

On a positive note, the group believed the regional council decision would prompt councils around the country to follow suit in increasing pay.

The council said the decision would not affect rates in year 2 of the council’s 2021-31 long-term plan.