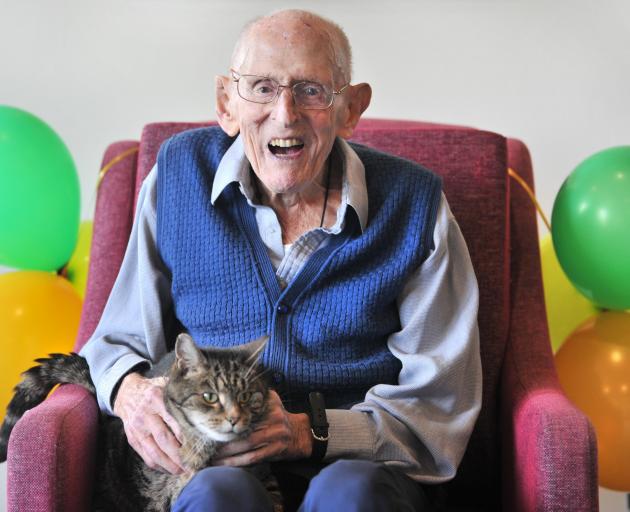 Gerald Huntley, along with resident cat Missy, celebrates his birthday with a barbecue lunch at Brooklands Life Care Retirement Village yesterday. PHOTO: CHRISTINE O’CONNOR
Gerald Huntley did not expect to live to the age of 22, let alone 102.

"I don’t know how the hell I did it," he said yesterday.

His birthday was celebrated yesterday with a barbecue at the Brooklands Life Care Retirement Village in Mosgiel, where he lives.

One of five siblings, he was born in Dunedin in 1918 to parents Edith and Burt, and attended Arthur Street School, which he liked to call "Arthur Sleep School" when he was younger.

He worked at Whitcombe and Tombs during the the Great Depression.

"It is hard to put into words today how bad [it was] and what life was like."

While he was not sure how he had managed to live so long, his love for music had played an important part in his life, Mr Huntley said.

"I live for music — I will go anywhere for music."

One of the best times of his life was when his mother signed him up to the St Paul’s Cathedral choir when he was about 8 years old, he said.

Diversional therapy practitioner Heather Martin said Mr Huntley had a "wicked" sense of humour and while out on a walk a few days ago, he serenaded some of the women at the rest-home.

He was also frequently seen with a glass of Baileys in his hand and singing during Happy Hour.

Mr Huntley said his parents used to tell him he would have to pay for being "a bit of a larrikin", drinking a lot and smoking a pipe when he was younger.

It was because of that lifestyle, as well as being sent overseas during World War 2, that he thought he would not make age 22.

"You lived for today, not tomorrow," he said.

He spent two years in Egypt and two years in Italy during the war, where he was in charge of supplies to sustain soldiers.

Despite it being wartime, Mr Huntley recalled loving living in a place right on the beach in Italy.

He also spent plenty of time with a woman called Edna, who was with the Women’s Army Corps and would later become his wife when they returned to Dunedin.

They had two children, Ross and Jan, and took over a combined book and toy store in Green Island, which they sold when he turned 60.

Mr Huntley then worked at Castle St Panelbeaters doing bookwork, until retiring in his 70s.

The couple moved into Brooklands when Mr Huntly was 72, where his love of music only continued to grow in the RSA and Brooklands choirs.

Edna has since passed away.

Mr Huntley said the rest-home was a "lovely place".

"I was sitting in the sunshine the other day and I thought how we are very, very lucky, in this part of the world, that we can sit out in the sun and enjoy it."