‘Invermay is here to stay’

By Chris Morris
0 Comments
Campaigners are declaring victory in the six-year fight to save Dunedin’s Invermay research campus and the dozens of top science jobs still based there.

AgResearch, as part of its Future Footprint plan, had intended to relocate top scientists and support staff — particularly those focused on sheep genetics and genomics — from Invermay to Lincoln.

But, after years of campaigning in Dunedin and in Parliament, the letter of expectation from Dr Woods stressed the need to maintain Invermay as "a centre of research for the primary sector, especially in respect of sheep genetics and genomics".

"I expect you to maintain human and physical capital already developed at this site," she wrote.

AgResearch acting chairman Dr Paul Reynolds wrote back to the minister, confirming the organisation was "committed to maintaining our human and physical capital" at Invermay.

Dr Clark said the letter was "as clear as the Crown gets about its intentions", and AgResearch’s response showed it got the message.

He was "delighted" by the outcome, which meant Invermay "has been saved".

"The Coalition Government has made its position on Invermay clear as day — Invermay is here to stay," he said.

And, if AgResearch continued to collaborate and deliver "quality research", "the future looks really bright for Invermay, as it does for all of our research centres".

The developments came too late for more than 40 staff who had already quit Invermay since the Future Footprint plan was announced in 2013. 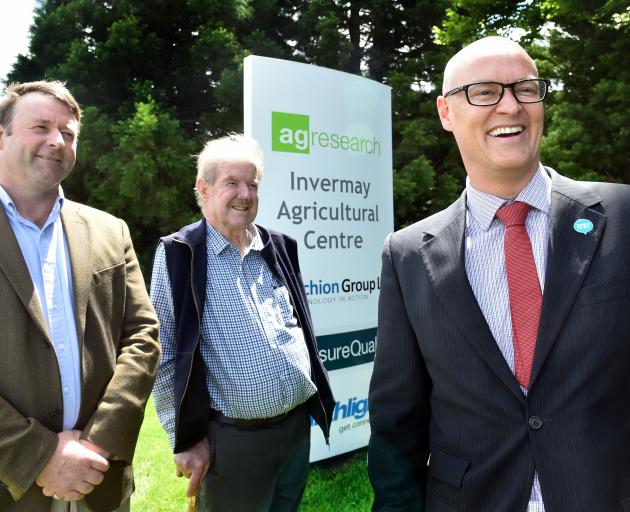 Initially, 85 science and support staff were expected to move from Invermay to new campuses in Palmerston North and Lincoln.

That number later dropped slightly, while the date staff were expected to move was pushed out as far as 2019.

Earlier this year, it emerged three staff had moved to Lincoln, six more had been made redundant, and 44 staff had quit.

AgResearch said at the time only three had cited Future Footprint as their reason for departing, and the rest were the result of "natural turnover".

The remaining staff at Invermay were working alongside 20 co-located business partners.

It was also confirmed earlier this year AgResearch had scrapped plans for a joint Lincoln campus, set to cost $206million, and would instead investigate building its own facility at the campus, after the Government rejected a third business case for the venture.

The announcement was followed by the departure of AgResearch chief executive Tom Richardson in October.

Yesterday, Jock Allison, the former Invermay head who campaigned against the restructure, said he was "delighted" by the outcome, although it "would be far better if it hadn’t taken so long.

"We’d have far more of the good staff wouldn’t have left. But we still have a significant group who will contribute significantly into the future, guaranteed, for the sheep and cattle industry."

Asked what lessons there were for the future, he replied: "Do what common sense tells you."

"There’s been a complete lack of it for quite a long time."

"We’ve got world class — the best — sheep genomics scientists in the world, and disbanding that would have been a disaster."

Dr Clark was not opposed to the entire Future Footprint plan, but it had never made sense to shift sheep genomics and genetics capability away from Invermay, where it was so well established.

The benefits for Dunedin, and further afield, were significant.

"These are high value jobs ... Invermay’s reputation is not a New Zealand reputation — it’s an international reputation.

"We’ve preserved those jobs and the international connections that come with it, and it’s good for New Zealand as a whole."