As cigarette smoking continues to become less socially acceptable, the use of vaporisers and e-cigarettes is increasing. Margot Taylor talks to the lead researcher in the word’s largest trial on the role of  e-cigarettes in quitting smoking, and people who have swapped cigarettes for vaporisers, about the rise of vape culture.

Little  is known about the effects of the long-term use of vaporisers and e-cigarettes.

The devices have been widely available online since the mid-2000s, and the first brick-and-mortar store in New Zealand opened in Dunedin in 2013.

Theories about why there have been few studies on  the devices as a way to help people quit smoking tobacco range from a belief the tobacco industry is using its financial influence to stop this from happening, to concerns about the discovery of the devices’ possible negative side effects.

Dr Walker has spent the past 12 months as  lead researcher of a study  at the National  Institute for Health Innovation at the University of Auckland to conduct the world’s largest trial of the role of e-cigarettes in quitting smoking.Twelve hundred people from throughout New Zealand will be given  e-cigarettes or nicotine patches, or a combination of both, for six months.

Dunedin e-cigarette store Vapourium account manager Cody Peneamene blows vapour rings from a vaporiser. Photo: Stephen Jaquiery
Some people will continue to smoke tobacco throughout the million-dollar  study, but that is the point,  Dr Walker says.

"It is called a ‘pragmatic’ study because it reflects what happens in the real world, and so people can do what they want.

"If it were in a clinic, where it is very tightly controlled, it would produce different findings ...

"We don’t know what they are going to do, so that is one of the reasons we want to see every possible outcome in the real world, where we are not paying them to use the product and we are not controlling every action."

Study participants who are given a device are able to choose between two e-liquids (e-liquid is the fluid that is vaporised,  and contains flavouring and comes with  or without nicotine) to use during the study.

Both e-liquids are tobacco flavoured, but one has been designed to mimic the taste of roll-your-own tobacco.

Findings from the study will go into the Cochrane Reviews, a database of pooled findings on health, widely recognised as the highest standard in evidence-based healthcare resources.

Dr Walker says information in the database makes it "much easier" for a doctor to make a decision about their practice.

A selection of vaporisers and e-liquid at Dunedin store Vapourium. Photo: Stephen Jaquiery
At present sellers of e-cigarettes and vaporisers cannot market the products as smoking cessation devices because of the lack of evidence about their benefits.

In an online document discussing e-cigarettes the Ministry of Health says the potential for the devices to improve public health depends on the extent to which the devices can be used to help people quit smoking, without encouraging children and non-smokers to take up the habit.

Next year the Government will change the law regulating e-cigarettes to enhance regulation of the devices.

Proposed changes include prohibiting broader advertising of the products, prohibiting vaping in workplaces and areas where smoking is not allowed, prohibiting the sale and supply of the devices to people under 18 and allowing retailers to display e-cigarettes and e-liquid at point of sale.

While  Vapourium cannot know how many customers have stayed off tobacco, there is no doubt the devices help people, Mr Peneamene says.

"The reason why I think it is so effective is because it deals with the physical addiction to nicotine, and the habitual addiction of doing something." 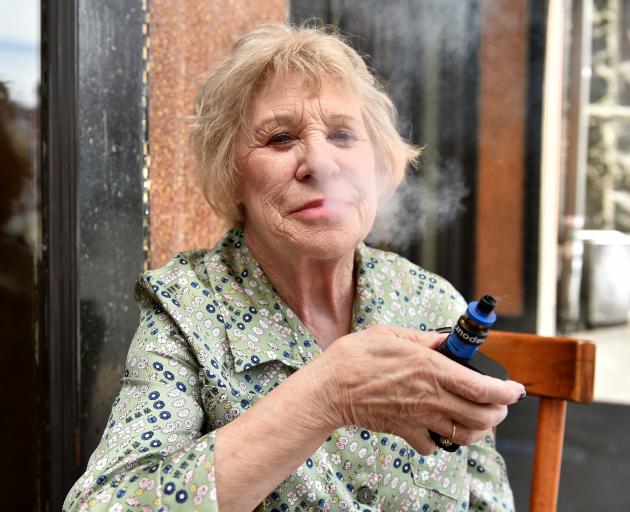 Patricia Court says vaping is the only thing that helped her give up an almost 40-year smoking habit. Photo: Gregor Richardson
Most people who come into the store  to buy a device to stop smoking cigarettes do stop, he says, but for some even cutting down is a significant thing.

Mr Peneamene says his mother stopped her 35-year smoking habit four months ago after he convinced her to try a vaporiser.

But until the devices are recognised as smoking cessation methods at a government level not every smoker will have adequate information or access to them. Patricia Court (65) said she and  friend Maxine Gilland (67) were both heavy smokers until they saw someone vaping and tried the devices about two years ago.

"I was a heavy smoker — I’d have an inhaler in one hand and a cigarette in another."

She says  even [smoking cessation medicine] Champix and the death of her mother from a smoking-related disease did not make her quit her almost 40-year, 20-a-day habit, but vaping did.

"I actually prefer it to a cigarette.

"It doesn’t clog your lungs.

"I used to take inhalers three-four times a day, now I take them twice a day.

"The pain is gone from my lungs and I used to cough constantly; it was so embarrassing."

She says her doctor is happy she is vaping rather than smoking.

Ms Gilland says the pair have become the poster girls for older vapers in Dunedin, but she is happy to fill this role.

"I used to feel guilty smoking in public — people regard you like a leper."

She says they still get funny looks, but some people are just intrigued by the vapes.

They don’t know other people their age who vape, but they encourage people wanting to quit smoking to give it a go.

For some people vaping goes far beyond the desire to quit tobacco, and  is "deep in culture", Mr Peneamene says.

"It started from re-purposing flashlights.

"The culture is very much steeped in ‘do-it-yourself’."

For some, being able to construct their own vaporisers,  from flashlights or by mixing and matching different components from retailers, is a  fashion statement.

Vapourium stocks everything from bubble gum-pink vaporisers to ones with jet-black, fist-sized chambers and chrome detail.

The vaping community even has its own subset, known as "Cloud Chasers", who modify their devices to produce bigger vape clouds and throat hits.

Videos of cloud chasers doing vape tricks with their devices have attracted millions of views on YouTube and whole blogs are dedicated to how to control the temperature of vaporisers and the best devices to use outdoors.

With this has come the proliferation of merchandise and branding and the establishment of a multimillion-dollar industry.

But it will be the number and range of people who can be helped  to stop smoking by the devices which will be the true test.

The diversity of people who use the devices was evident during a visit to  Vapourium.

A young couple accompanied by their toddler spent about 20 minutes discussing the finer points of a particular vaporiser with one of the staff.

A middle-aged businessman popped in, bought his regular e-liquid and left.

Another man sat in the shop’s backyard sipping  coffee and blowing vape rings.

While  some staff show customers  how to use and service their devices, others are busy packaging supplies to take to the annual Vape Day  at the Kings Arms Tavern in Auckland.

The clear social aspect of visiting  Vapourium and using a vaporiser is in stark contrast to the increasing physical and social isolation of cigarette smokers, whose designated spaces are being pushed to the fringes of buildings, public spaces and social norms.

The results of the e-cigarette study are expected by July next year.

Dr Walker says governments all around the world are likely to use the findings to inform legislation around the devices.

It is important more is known about the devices soon because smoking cessation is crucial to the health of the world’s ever-increasing population, Dr Walker says.

"Smoking cessation itself is probably the most important thing to do to improve anyone’s health.

"Not only for an individual, but certainly their family and then their entire community will benefit ...

"It is the most cost effective intervention out there."

They are still inhaling nicotine which is a vaso-constrictor and can lead to coronary heart disease as well as being addictive.