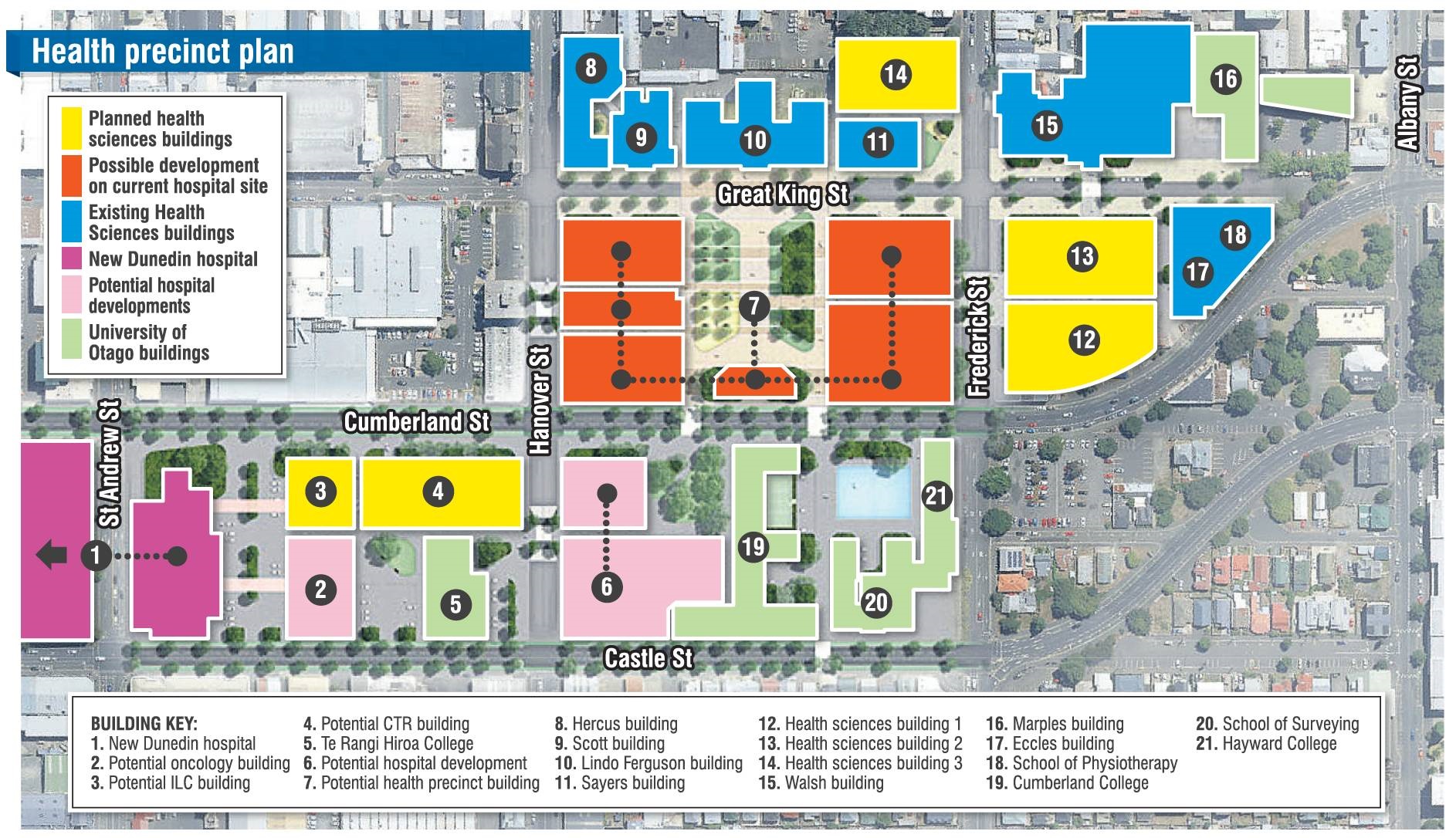 The University of Otago has revealed a more than $1 billion vision for a health precinct it says offers a once-in-a-generation chance to reshape Dunedin’s city centre.

The planned precinct stretches from the new Dunedin Hospital to the School of Dentistry.

Stephen Willis. Photo: ODT files
The university also raised the possibility of a public square at the site of the present Dunedin Hospital forming the "heart" of the new health quarter.

University chief operating officer Stephen Willis said the vision relied on its key partners, including Ngai Tahu, Ministry of Health, the Southern District Health Board, and the Dunedin City Council.

"This is an opportunity for growth, innovation and industry partnership," Mr Willis said.

"We want to future-proof the university’s world-class health sciences education and research while strengthening our relationships with our partners and the city."

The proposal anticipated remedying this through interactive displays and glazed building fronts that allowed a view of ground-floor activities.

Major parts of the plan unveiled yesterday each required separate approval, he said.

They included a $240 million education-focused health sciences building on the corner of Frederick and Malcolm Sts that housed shared "superlabs" and wet lab teaching space.

Feasibility work had already begun for the building, which was likely to take six to eight years to complete, Mr Willis said.

The second new build in the plans would be another $240 million health sciences building that primarily housed research and work spaces.

The second building, on the corner of Frederick and Great King Sts, where the Hunter Centre now stands, was planned to link with the first.

Its construction was estimated to begin in the early 2030s.

A $220million Centre of Clinical and Translational Research was hoped to go right next to the new hospital.

It was hoped the building would become a magnet for the health industry, allowing the city to capitalise on the growing demand for clinical trials, he said.

The Lindo Ferguson, Sayers, Hercus and Scott buildings would have their specialist labs and functions relocated into the newer facilities.

The historic buildings would be refurbished to include modern offices and a student hub.

A joint venture between the Ministry of Health, the SDHB, the university, and Otago Polytechnic would provide a training facility for health professionals and students.

Dubbed the Inter-professional Learning Centre, it was proposed for the Wilsons block site.

The Otago Daily Times reported earlier this month the university could contribute as much as $20million to the $51million collaborative project.

The third new health sciences building in the works, planned for the site of the existing Adams building in Frederick St, would be focused on learning and teaching.

The site for the building was due for demolition earlier in the programme but the project was estimated as having a late-2030s construction date.

A new medical education unit and advanced learning medicine space was proposed for the ground floor of the Walsh building, in at present vacant space.

Mr Willis said the university recognised its 20- to 30-year plan for the health precinct was aspirational but it had been developed with input from university staff, students and runanga-based consultancy service Aukaha and in talks with other partners.

However, the university’s plans showed an oncology building possibly linked to the new hospital, and a "potential hospital development" building placed where the physiotherapy pool now sits.

New Dunedin Hospital project director Hamish Brown said despite the university’s health precinct plan, there were no planned changes for either facility "at this stage".

Mr Brown said the university’s plans were exciting, and that it was imagining possibilities for Dunedin.

"As a DHB, we need to consider community needs for the site, which could include community outreach facilities, the relocation of cancer services, a rethinking of mental health delivery, or even parking," Mr Brown said.

This reads like an episode from 'Utopia', the Aussie series on Netflix.
I can't wait to see the logo.....

And nary a car park in sight....I guess we'll all be walking to these buildings.

This is what I love about elite academics.
The are so convinced, that what they do, is brilliant for everyone, because it fits with their vision, and their intentions are as pure as their ego.
This has always been the plan of our cities elite.
That is why the new hospital site was purchased where it is.
That is why they weren't interested if the ground was suitable for the concept being sold to the public.
These conspirators want to claim the city centre as part of the campus.
That will give it the same vibe as the uni which is great if you're an academic or student but few other Dunedin residence ever go near the place.
This is how it will be when this plan continues to go ahead, because it is already going ahead and they are using taxpayer money, not their own, to claim the city their own.
Notice how they don't even explain how the politariate will travel from north to south, at least, beyond walking or cycling distance.

Who's got an ideology again hmmm.

Great assessment and sadly the social science academics add nothing positive to our city. They are good at tell us how to live, think and do our jobs thou.

At last, some vision for Dunedin. We certainly need to update the facilities and making the campus more joined up makes sense. Linking the health teaching and research with the hospital is really a no-brainer. We need to train more health professionals in an efficient and practical way.
As for the above comments; yes, there does need to be car parking and good transport networks.
Eyes wide open seems to have a chip on his/her shoulder. Without the university (and therefore better hospital facilities than we would normally have) Dunedin would be more like Balclutha but without the work. Don't blame the university and academics if you don't visit the place, plenty of things are open to the interested public.

Strawman argument there David.
The issue is not the need for health professionals but the location and direction the university is expanding into.
Our commercial centre and heart of the city is being eaten up by government enterprises.
Central government does NOT PAY RATES to local government.
The uni is an increasing % of the cities GDP which is nice at one level but if it drives out commercial operations it reduces the commercial rate take and so the burden falls elsewhere.
The DCC's focus is clearly on accommodating the uni because I have yet to see any attempt to promote businesses.
It is those businesses that pay the taxes that pays for the uni.
Now our Climate Change Commission says that reducing our GDP is an ok price to pay for its goals and the uni is saying it's share of GDP has increased 2%.
Now you might claim such an observation is evidence of a chip on the shoulder but I'm saying my eyes are wide open.
It's a ponzi scheme !!!