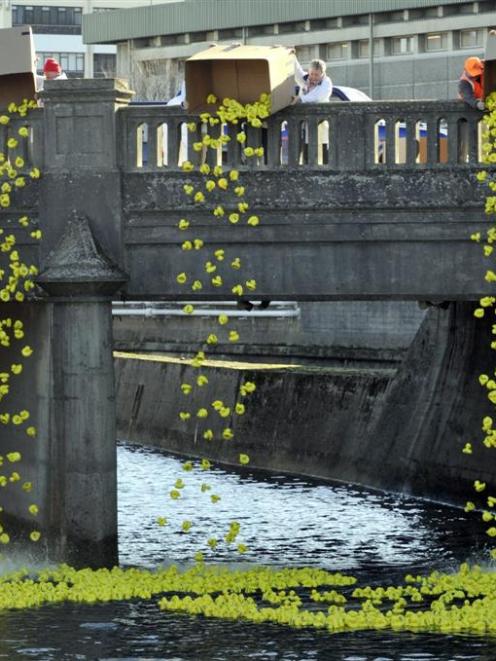 5000 plastic ducks are dropped into the Water of Leith at a State Highway 88 openday in Dunedin yesterday. Photo by Gerard O'Brien.
Before logging trucks, campervans and commuter cars take it over, State Highway 88 was dominated by different sets of wheels - trikes, bikes and strollers - at an open day yesterday.

Organised by the Rotary Club of Dunedin East, the event was an opportunity for the public to view the newly constructed stretch of road, and get a different view of the nearly complete Forsyth Barr Stadium.

Stacey Jefferies, her husband Scot and children Cole and Ryder enjoyed a stroll along the highway, especially Cole who was impressed with its surface and breadth - ideal for his trike.

"We saw it in the paper and thought it was a good opportunity for Cole to ride his bike and for us to get some exercise," she said.

The day, which attracted about 1000 people, included a truck tow which pitted Otago University Rugby Club team-mates against each other, a flyover by Mainland Air, and a rubber-duck race on the Water of Leith.

There were cheers as 5000 ducks were tipped into the water. Organising committee member Bevan Rickerby was pleased none was lost.

Prizes included a $6500 room makeover. The winners will be announced in Wednesday's Otago Daily Times.

Mr Rickerby said the race would become an annual event. All money raised on the day will go to the club's charitable foundation which makes grants to community groups.