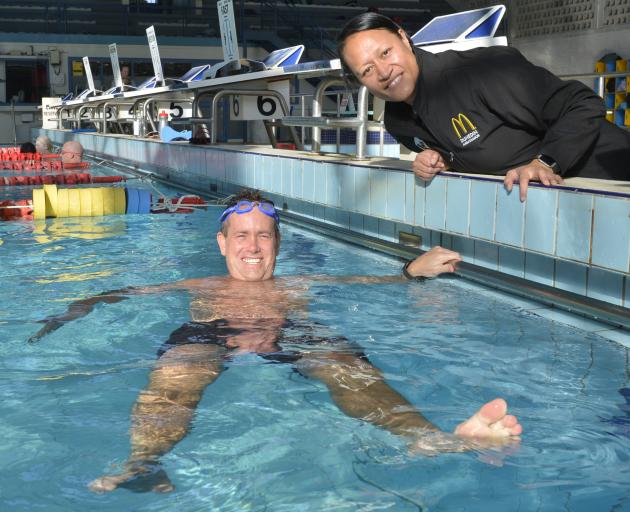 Justin and Eterei Stonelake, who own the three McDonald's restaurants in Dunedin, have dived into the fundraising effort for the new pool in Mosgiel, pledging $100,000 after the Dunedin City Council financially backed the project earlier this week. PHOTO: GERARD O'BRIEN
Now the city council has financially backed Mosgiel's new pool, it is time for others to pitch in, a Dunedin business owner says.

The day after the Dunedin City Council voted to contribute $10.8 million to the new aquatic centre in Mosgiel, Justin and Eterei Stonelake, who own the three McDonald's restaurants in Dunedin, pledged $100,000.

Mr Stonelake said the council's decision gave them confidence the pool project would finally go ahead.

"The bridge isn't too far to cross now and if we can get behind and help in some meaningful way, then I think this might encourage others who have been waiting to step up as well."

How the donation was recognised would still need to be negotiated with the Taieri Community Facilities Trust but Mr Stonelake said they did not do it for publicity.

"We live out there and understand it from a community and residential point of view and the value it will bring to the area.

"It's more of a goodwill donation than anything else."

Now the council was committed to the project, others should start to think about how they could contribute, he said.

Trust chairwoman Irene Mosley said she and other trust members had already received phone calls from people asking how they could contribute to the project after the council's decision.

The council's contribution would be subject to a minimum $3.2 million being raised by the trust through donations, naming rights and grants.

Mrs Mosley said she was confident the trust would exceed what was needed. It had already raised about $1.2 million.

"Our goal is to raise $5 million over and above what the council has budgeted, and we believe this is very achievable and support such as this is a real boost for the project."

I hope the plans include slides, splash pools, bombing pool, spar, sauna, aqua aerobics. Lap swimming is not popular and only a few lanes are required.

Wow I had to google Mr and Mrs Stonelake, IMHO this couple appear to have the heart of Dunedin and its people, this is the type of people Dunedin really needs on the council, business savvy and caring people.