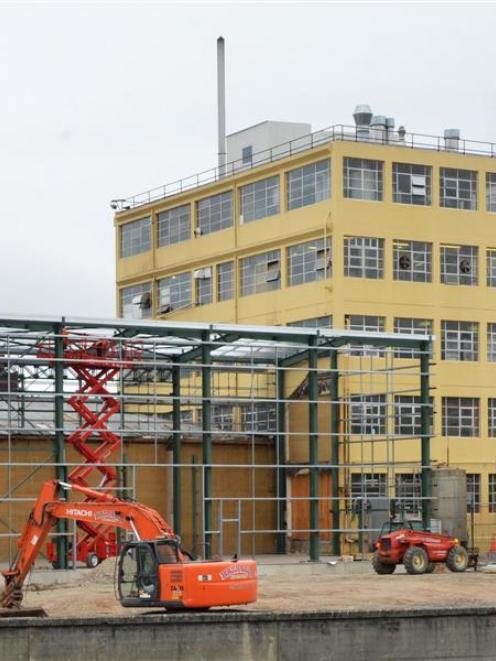 Construction at Cerebos Greggs in Dunedin. Photo by Gerard O'Brien.
The equivalent of more than five rugby fields of industrial space has been created in Dunedin via 11 new developments during the past 18 months.

Aside from the new space, the former Carisbrook groundoffers a possible further 30,000sq m of land, but owner Calder Stewart Industries is yet to confirm any tenants.

Commercial and industrial land research by Colliers International recently noted that there was a shortage of quality buildings to lease in Dunedin, and several industrial occupiers had commissioned new design-built premises.

Colliers industrial and commercial manager in Dunedin, Dean Collins, said of the 11 new developments, six were for owner-occupiers and five for tenants.

Mr Collins said there was no shortage of investors at present, but there was a paucity of quality premises.

There has, for many years, been a shortage of freehold industrial land around Dunedin, which at times has created issues over reverse sensitivity should any rezoning allow for residential expansion.

Port Otago subsidiary Chalmers Properties owns large swaths of the central industrial precinct, with a portfolio valued at more than $127 million, and sold two holdings in the last financial year.

Mr Collins said the new spaces offered attractive locations for both investors and tenants, and that the status of earth-quake strengthening was also an important factor.

He said the city's industrial land shortage was expected to ''in part'' be alleviated by Calder Stewart's Carisbrook development, which would eventually have 3ha of prime freehold industrially zoned land on offer.

He understood negotiations were under way for land at Carisbrook, which could include leasing of the entire area, or parts of it.''

They will no doubt be looking for a [major] anchor tenant,'' Mr Collins said.

11 new industrial buildings, adding about 27,000sq m of industrial space to the city.

Industrial sales in Dunedin since mid-2013