132 guns handed over in buy-back 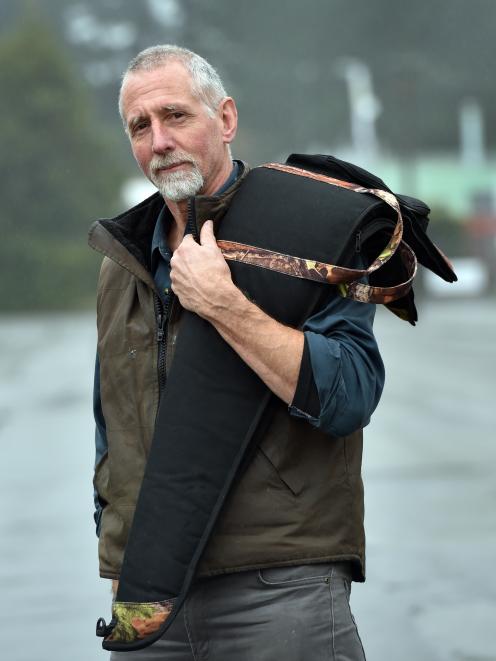 Dunedin man Jamie Sinclair parted with his firearm at the police gun buy-back at the weekend. PHOTO: PETER MCINTOSH
More than 130 prohibited firearms were handed to police in Dunedin yesterday, as a national firearms amnesty continues.

Police said 94 gun owners were processed at Kensington Army Hall, and 132 prohibited firearms were handed in along with 275 parts and accessories.

A handful of gun owners could be seen leaving the hall in the rain yesterday morning, after relinquishing their firearms to police.

Dunedin man Jamie Sinclair, who handed over his 12-gauge shotgun, said outside the hall that he considered the buy-back "unfortunate" - but he was happy with the way it had been handled.

"The police are just dealing with what has been pushed on to them," he said.

"They're just doing what they are told, just like us."

There were about 10 or 15 people in the hall handing back their weapons when he was in there.

He said his own gun had been unused for 10 years, and in some cases people were giving back weapons they could no longer use because of their advancing age.

"Guns don't wear out as quickly as people," he said.

The gun buy-back ran all weekend in Dunedin.

Police district commander Superintendent Paul Basham said a range of weapons were handed in during the weekend - including several AR-15 rifles.

About 90 people were processed in Mosgiel on Friday, but the number of people coming in was slightly lower on Saturday.

Most gun owners seemed happy with the amount of compensation they received, which appeared to exceed their expectations.

Across the country, gun owners received $2,098,534 in compensation yesterday.

Supt Basham said as word got out, he hoped other people would be encouraged to "do the right thing" and surrender their firearms.

Dunedin gun owners would have another opportunity to hand over their guns next weekend, when police returned to the city for a second collection, he said.

"I would say that today's been a success.

Police had been offering people hot food and drinks, and were trying to make the process as comfortable as possible.

Police will be in the North Otago town of Palmerston on Friday, before returning to Dunedin and Mosgiel next weekend.

The amnesty runs until December 20.

OooOOOOooo 132
What an astonishing figure. By the end of it, they'll be lucky to round up a couple of thousands of the 50+ thousand they THINK are out there (not that they know any of the figures)