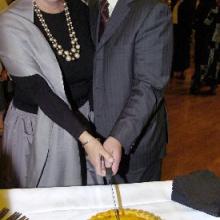 But those present at the Dunedin Public Art Gallery last night did not doubt it was a fitting tribute to the Dunedin-born artist and an appropriate way to officially open the Frances Hodgkins: Femme du Monde Exhibition.

Alexa Johnston, author of biography Femme du Monde, which was launched last night, said the pie was one of Hodgkins' favourite foods, along with Turkish Delight and cupcakes which were served along with other canapes during the function.

"Frances liked food. She painted it and sent letters home to family about it."

Gallery director Elizabeth Caldwell said more than 70 of Hodgkins' artworks spanning 1890-1945 were on display at the gallery and it was the first time all the works held in Dunedin public collections had been brought together in the same place.

She said the exhibit would allow Dunedin residents to appreciate the depth and quality of her life's work.

A second exhibition, Frances Hodgkins: Family and Friends, was also opened at the gallery last night and features works of art made by her family and circle of friends.

Both exhibits will run until July 26.

Hodgkins was one of New Zealand's most loved and critically-acclaimed artists.

As an expatriate, she spent the majority of her artistic career in Britain and eventually established a name as a leading Modernist painter.

Despite this, she always maintained strong connections with family, benefactors and key supporters in Dunedin.