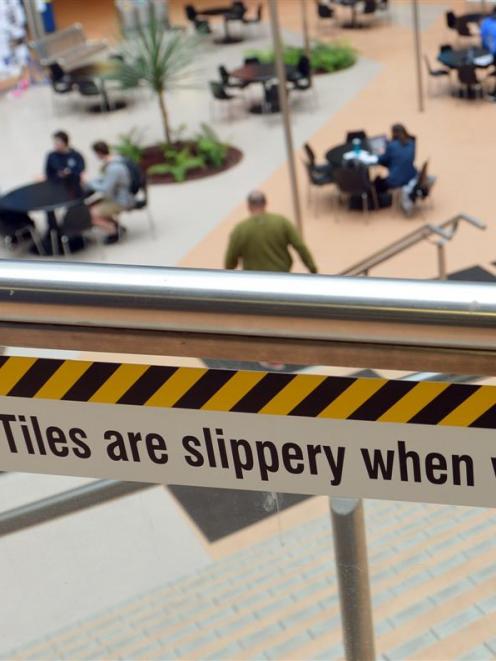 The university said yesterday until the refit was complete, its property services department was considering ways to permanently restrict access to risky areas of the building.

The response comes as WorkSafe said it was working with both the Dunedin City Council and the university to make sure the work being done would solve the problems at the building.

In late August, the university apologised and paid reparation after Auckland woman Katherine Casey was left with permanent injuries following a fall in the commerce building atrium.

That came after a private prosecution in which the university pleaded guilty to a Health and Safety in Employment Act charge of failing to take action to ensure the safety of flooring for people walking across it, knowing failure was likely to cause serious harm.

Ms Casey brought the prosecution after she fell on slippery tiles in the atrium in 2013, breaking her pelvis in three places, and her spine.

It emerged at the time the university had received 82 complaints - 12 involving serious injuries - since the building was completed in 1993.

The atrium had problems with leaks, and its tiles were slippery when wet.

The university said yesterday a standing committee of the university council last week approved the project to renovate the building.

The project would include enlarging the atrium, replacing its roof, creating a new entrance at ground level from Union St, upgrading office spaces and reception areas and building a new cafe.

The estimated timeline was for design to be completed next April and construction work to begin in the middle of next year for completion in mid-2017, a spokeswoman said.

Consultant Beca Ltd had been asked to consider other improvements that could be made before construction started.

The company was in the commerce building in September and its final report was due shortly.

Ministry of Business, Innovation and Employment workplace health and safety regulator WorkSafe said, following an Official Information Act request, it had ruled after Ms Casey's fall the problems at the building were not in its jurisdiction.

The organisation had passed the matter to the Dunedin City Council, as the problem was a building issue.

WorkSafe high hazards and specialist services general manager Brett Murray said: ''WorkSafe is working with Otago University and Dunedin City Council to gain an assurance that the remedial action planned by the university will provide a long-term solution to the problem in the Commerce Building."

WorkSafe was ''also looking at the broader health and safety systems at the university that may assist in preventing a similar accident''.

Council building services manager Neil McLeod said after WorkSafe passed the matter on to the council, it had been in regular contact with the university, which had applied anti-slip coatings to a large area of the floor where slips and falls had occurred.