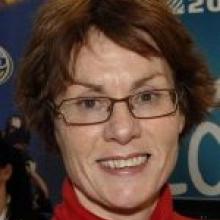 Debra Simes
The Dunedin City Council is dipping into other budgets to cover a $250,000 shortfall to cover expenses for Rugby World Cup festivities in Dunedin.

The council had budgeted $100,000 for planning and events associated with the tournament, but council staff yesterday confirmed that had proven to be about $250,000 short.

Council Rugby World Cup co-ordinator Debra Simes conceded the true cost of the council's tournament obligations was expected to be $350,000, with the shortfall bridged using other council departments' budgets.

Ms Simes said the council had been caught out by the extent of planning required for tournament matches.

The late changes to match allocations following the Christchurch earthquakes had also come as a surprise. .

The transfer of matches from Christchurch saw Dunedin pick up an extra match, lifting the total to four, and hosting rights for the England team, which would play three pool matches in Dunedin.

Budgets had been based on previous experience hosting international rugby tests in Dunedin, but the council had underestimated the organisation and costs associated with RWC fixtures, she said.

"Rugby World Cup is a much, much bigger event, with more substantial costs, and we were unaware of some of these initially. That's the reason why the $100,000 [budget] is now a little light." Council departments were being asked to contribute to the budget shortfall where their areas of operation overlapped with tournament costs.

Transportation department operations manager Graeme Hamilton said each match would cost his department about $40,000 in traffic management costs (about $160,000 for the tournament).

The money came from the $1.4 million urban maintenance budget for 2011-12, and means $160,000 less to spend fixing potholes or other minor roading maintenance projects. However, Ms Simes saidmany city improvements being paid for would remain after the tournament and bring lasting benefits.

That included $54,000 to improve pedestrian lighting along Anzac Ave for fans attending night matches at the Forsyth Barr Stadium, and new "banner arms" on Anzac Ave, Albany St and around the stadium.

The council had also paid $48,000 for 600m of portable crowd-control fencing which would be used later for other events, like Octagon New Year's Eve concerts.

It was important to set the right tone by ensuring Dunedin's first match (England v Argentina), in particular, went smoothly.