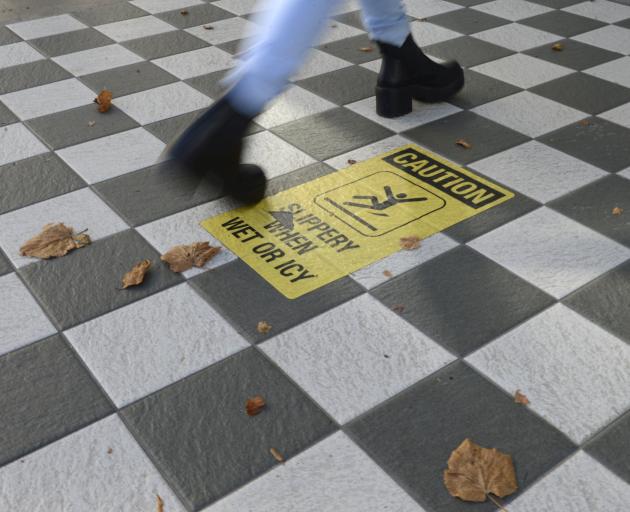 A sign warning of a slippery surface outside the University of Otago's information services building. Photo by Gerard O'Brien.
The University of Otago is set to spend almost $2 million upgrading its campus to prevent people from falling after a series of injuries last year.

Chief operating officer Stephen Willis said the project came after its health and and safety team combined with ACC in 2014 to develop a ''slips and trips'' survey to identify areas of the campus causing concern.

The project, approved last year and set to start in January, was based on the results of that survey, Mr Willis said.

''The proposed work not only addresses areas of concern, it also seeks to improve the campus by expanding on the university's recently completed central campus landscaping project,'' he said.

It comes as 76 incidents were reported across all of the university's campuses last year.

The incidents ranged from slippery surfaces being reported to actual falls, with nine of them causing minor injuries.

The most common injuries were bruising and rolled ankles.

The project, expected to be completed in August next year, involved upgrading landscaping in the areas bounded by the junction of Union St and Castle Walk, near the information services building, the Richardson building, and from the Archway to Cumberland St.

Raised lawns outside the Union Court building would also be reconfigured, water drainage improved and some existing paving, lighting and street furniture replaced and new recycling bins and signs installed.

The university already took the issue seriously and signs were used to warn some areas were slippery.

Worksafe had been notified about two incidents which involved slips, trips or falls on the campus since the start of 2015, both in 2015.

In one a man tripped on a paving stone and fractured a rib when loading gear into a St John ambulance outside the university's Union Building. The paving stone had since been repaired.

In the other, a female staff member broke an arm after slipping or tripping on something near the Archway lecture theatres.

The university's project comes after the university apologised in 2015 for injuries that occurred in the Commerce Building, which is now being upgraded.

The apology came after Auckland woman Katherine Casey received $60,000 in reparation from the university, after she was left with permanent injuries following a fall in the atrium of the building.