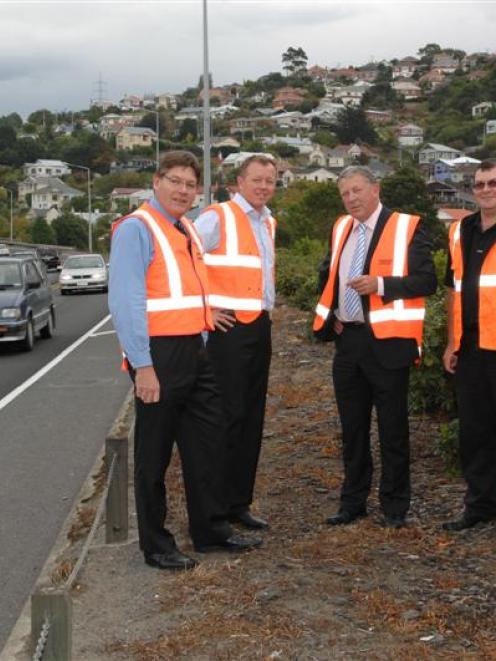 Downer EDI Works has been awarded the main contract for the $30 million to $35 million project by the New Zealand Transport Agency.

Downer team leader Duncan Kenderdine said the company would spend the next year working on the design, in conjunction with Opus International, and construction would begin in a year.

The plan is to create a four-lane highway from Andersons Bay Rd to Lookout Point with maximum speed limits of 60kmh and 80kmh.

Agency project team manager Simon Underwood yesterday said it was unusual for the same company to be awarded both the design and construction contracts.

However, it was expected many of the construction issues, such as minimising traffic disruption, could be resolved during the design process.

Mr Underwood said contractors would be working in a very narrow corridor but two lanes of the highway would remain open at all times, apart from a few hours at night while work was done on the Goodall St pedestrian bridge.

The agency's Otago Southland regional director Bruce Richards said the project would be the biggest in the region since the Fairfield motorway was completed in 2003.

"The Caversham highway is the busiest state highway in the region with 25,000 vehicles a day using it."

Mr Richards said queues could form along the highway at busy times and without the improvements, the problem would become worse.

"This will lead to greater pressure on nearby local roads as drivers seek alternative routes to avoid this congestion."

He expected the first stage, between Andersons Bay Rd and Barnes Dr, to be completed by 2013 and work on the second stage, from Barnes Dr to Lookout Point, to start in 2012 and be completed in two years.

The agency's board is keeping open the option of adding to the project a bridge for vehicles over the highway at Lookout Point.

It is believed as many as 2000 vehicles a day might use a bridge, and it would also offer new options for public transport routes.

The highway will not reach motorway standards because of the speed limitations created by the curve of the hill at Lookout Point, the retention of the Barnes Dr and Lookout Point intersections, and because residential access will remain, in some cases, he said.

Mr Underwood said attention would be paid to noise issues when the type of road surface was being decided.

He likened the completed highway, on the Caversham hill, to Stuart St.

Project features
(Travelling south)
Stage one
- Closure of the northbound on-ramp from the Glen because of a lack of room for traffic to merge.
- A new two-lane bridge at the Glen on the right of the existing bridge.
- The two new lanes to be added on the left side of the existing highway.
- Upgrade of the walkway/cycleway in its existing location.
- Raising and extending the Goodall St pedestrian bridge.
- Reconfiguring the Barnes Dr intersection to provide four lanes for through traffic and separate lanes for turning traffic.
- The maximum speed limit unchanged at 80kmh.

Stage two
- Removal of 20 houses on the left side of the Caversham hill to allow for widening of existing four-lane highway and installation of median barriers.
- Construction of a service lane for remaining houses on the left, further up the hill.
- Improvements to the shoulders of the highway.
- Upgrading of the walkway on the right of the Caversham Hill to accommodate cyclists.
- A walkway/cycleway bridge or underpass at Lookout Point.
- Intersection improvements at Lookout Point, reducing the number of turning options but retaining direct access between Mornington and Riselaw Rds.
- The maximum speed limit increased from 50kmh to 60kmh.