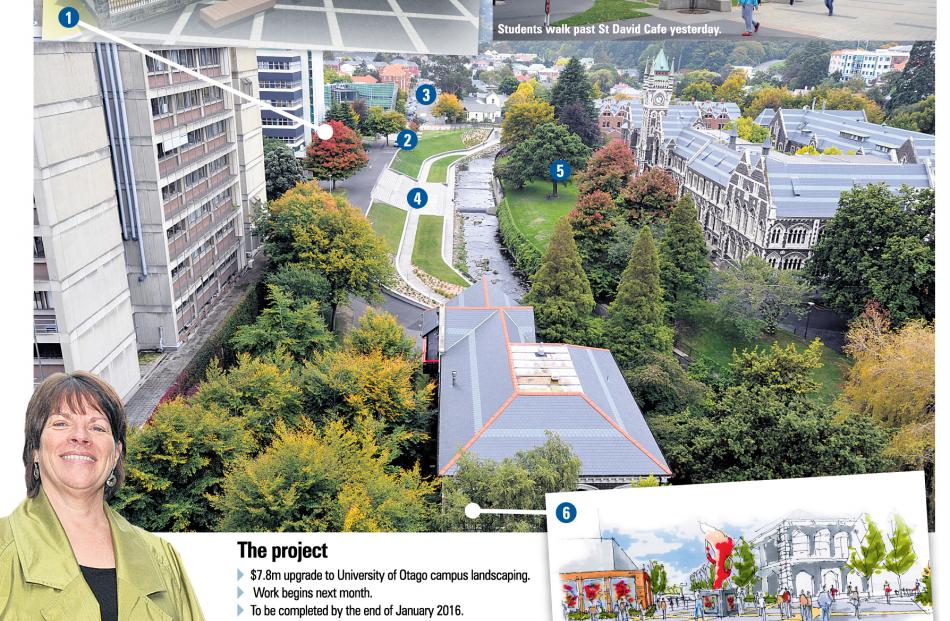 Next month, the University of Otago will embark on a 21-month multimillion-dollar landscaping project to transform Dunedin's campus. Timothy Brown reports.

A $7.8 million facelift will reinforce the University of Otago's reputation as one of the most beautiful campuses in the world, the university says.

A landscaping project begins next month which will transform the university's Dunedin campus.

The work has been tendered and contracts will be finalised next week.

Dunedin companies are set to be the biggest benefactors of the work, which includes about 15,000sq m of paving being replaced or relaid and the installation of new grassed areas, outdoor seating and trees.

The work begins with construction of an outdoor courtyard at the St David Cafe, and the project will be completed by the end of January 2016.

''We want to both maintain and enhance our well-known advantage as one of the world's most beautiful campuses in which to work and study,'' vice-chancellor Prof Harlene Hayne said.

''We will be using quality materials, timbers and real bluestone that blends in with our heritage buildings.

''We want this development to stand the test of time.''

The landscape plan has been developed with future construction projects in the university's priority development plan in mind, and will tie in with the campus master plan which was developed in 2010.

The plan will develop the campus grounds between the northern end of the Richardson Building and the intersection of Castle and Dundas Sts.

The St David Cafe courtyard will feature bluestone walls and a paved ''town square'' will be built outside the Staff Club.

The square will involve relocating some memorial trees, and the removal of others and artwork - which is yet to be commissioned - will form the centrepiece of the area.

''Great care has been taken in the planning to ensure this work enhances existing values, provides more visual linkages and better framing of the outstanding heritage and environmental values,'' Prof Hayne said.

''We are keen to see [the university] enjoyed by the citizens of Dunedin and visitors to the city.''

The plan would unify the design and paving of the campus grounds.

''The main impacts of this project are to protect, maintain and enhance the park-like surrounds and the green and spacious aesthetics of the university grounds,'' Prof Hayne said.

''We also wish to provide more 'active' spaces for staff, students and the public.

''There is a mixture of paving and design that has occurred as areas have been developed in isolation ... and these areas, such as the walkways and paths outside the Staff Club and outside the Archway Lecture Theatres, do not link as well as they could with other areas."

Drainage would be replaced during the work, on behalf of the Dunedin City Council, and improvements would be made to the west bank of the Leith.

''This is an exciting and innovative project that further capitalises on the potential here for greater outdoor utilisation of our beautiful, green areas, and spaces such as the north end of the Richardson building, where people have traditionally liked to sit because it is so sheltered and sunny.''