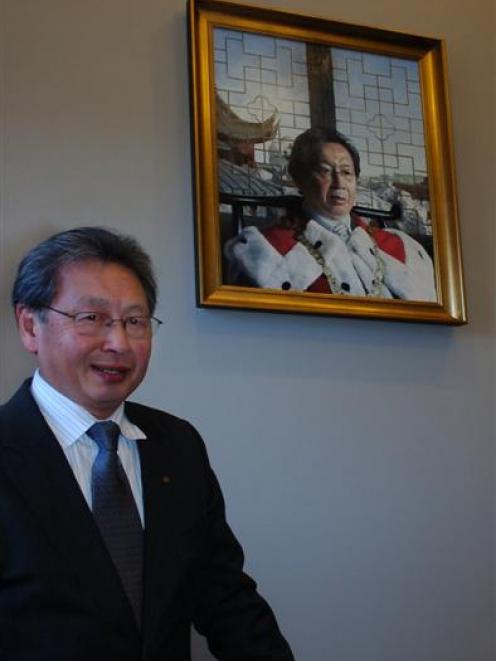 In discussions with Mr Chin for the portrait, it was clearly the project he was "most proud of", Mr Richardson said.

The oil painting was unveiled at a Dunedin City Council meeting yesterday.

Mr Chin chaired the Chinese Garden Trust that developed the garden, and said before last year's election he took "huge pride" in its completion.

He lost the election battle in October last year, after serving for five three-year terms on the council, the last two as mayor.

Since the 1940s, each mayor has had their likeness hung on the council walls, with Mr Chin's portrait now next to former mayors Sukhi Turner and Richard Walls.

The latest addition stands out, in that while Mr Chin wears the robes and chains of office like the others, the background depicts the rocks and roofs of the Chinese Garden and the hills of Dunedin.

Mr Richardson, who grew up in Gore and studied at the Otago School of Art.

produced an oil painting of a naked former All Black Anton Oliver, which caused something of a sensation, and sold for more than $16,000.

Yesterday's unveiling was a more sober affair, with the artwork receiving a polite clap.

Mr Richardson said it was his decision to add the background.

The portrait had been painted slowly, with sittings that took "a long time" beginning in 2008, and Mr Chin's personality in the painting slowly evolving.

"I reckon he has flattered me," Mr Chin said after the meeting.

"It has been a pleasure sleeping through the sittings," he joked.