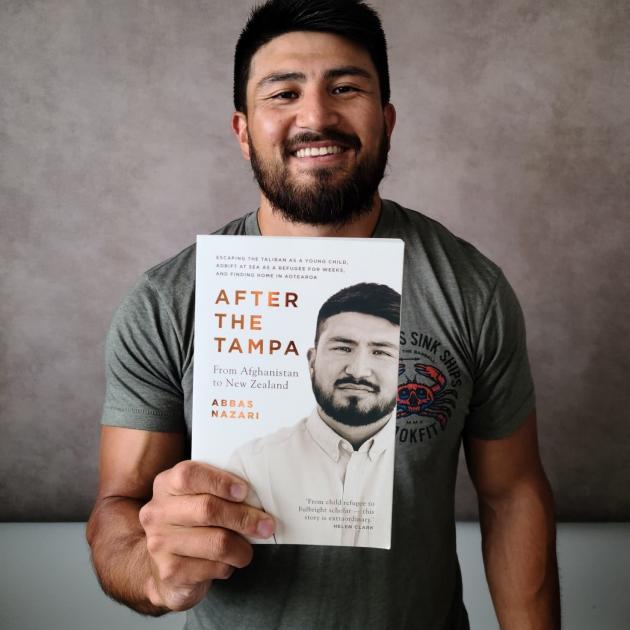 Twenty years after fleeing Afghanistan with his family, Abbas Nazari is telling their story in his new book. PHOTO: SUPPLIED
Twenty years after  hundreds of refugees were rescued by Tampa, the plight of those in Afghanistan is just as relevant. Daisy Hudson spoke to Abbas Nazari about telling his family’s story and helping New Zealanders to understand events happening a world away.

For many New Zealanders, the Tampa saga is a fleeting memory, a short chapter in our history when New Zealand stepped in after Australia’s refusal to help desperate refugees.

Mr Nazari was in Washington on a Fulbright Scholarship when a lockdown was enforced due to Covid-19 last year.

Writing became an outlet for him, and that resulted in his book After The Tampa.

He will visit Queenstown, Cromwell and Wanaka this week to talk about the book, which details his childhood, dramatic escape from Afghanistan, and the lives he and his family have built as refugees in New Zealand.

‘‘I wrote it because there are a lot of books written about refugees, but there are very few written by refugees to tell their own story.’’

He was just 7 years old when he and his family fled an increasingly dangerous and fraught Afghanistan.

After arriving in Indonesia, they decided to seek asylum in Australia in mid-2001.

Unfortunately, their dream of settling there coincided with a wave of growing anti-refugee sentiment, and a crackdown on the so-called ‘‘boat people’’ trying to enter the country.

When the rundown boat Mr Nazari, his family, and hundreds of other desperate refugees were on began to sink, they were rescued by the Norwegian fishing boat Tampa.

That was the start of an international incident and the Australian government refusing to allow the ship to dock at its ports.

After a lengthy stand-off, a detention centre was established for the refugees on Nauru.

Eventually, the New Zealand government offered to resettle some of them, including Mr Nazari’s family.

Before he agreed to write the book, he consulted his family — it was their collective experience he would be covering, not just his own.

As he had been so young at the time of their journey, there were gaps in his memory family members were able to fill.

‘‘My memory from the journey itself was pretty vivid, but what it lacked was an understanding of the greater context, politically, historically, that we were in.’’

The book was always scheduled to come out in late August, to coincide with the 20th anniversary of their arrival in New Zealand.

In an unfortunate twist of fate, the timing also coincided with the fall of Afghanistan to the Taliban.

‘‘It’s almost like we’ve come back full circle. We left Afghanistan 20 years to the day, and the Taliban are back in power.

‘‘It was just incredibly dispiriting on one hand, but also I think one of the reasons the book has done so well is that people are interested in why that country is the way it is and what are the stories of some of the people in that country.’’

He still has family and friends in Afghanistan. They told him fear hung over the country.

‘‘They’re just trying to get by and keep their heads down. They’ve woken up in a whole new country under a new flag, a new name, and new leadership.

He believed the book being available as events were unfolding in Afghanistan might have helped New Zealanders who did not know the history, to better understand how the situation had reached this point.

‘‘I was in Wanaka and then Cromwell a couple of weeks back and my fiance and I were having lunch at a cafe in Cromwell, and I overheard a discussion about Afghanistan. I turned around and said, ‘‘I’m from there’’ and we had this fantastic little discussion in central Cromwell about the people and politics of Afghanistan.

‘‘It’s just amazing to know how far the story has reached.’’

After two years of studying in the United States, he arrived back in New Zealand in August.

Then, the country was thrown straight into Level 4 lockdown.

Nevertheless, he was pleased to be home.

‘‘I was incredibly homesick for my family. We’ve been through a hell of a lot in the past two years with all the civil unrest in the United States.

‘‘Plus, I miss the South Island. It’s the most beautiful place in the world.’’