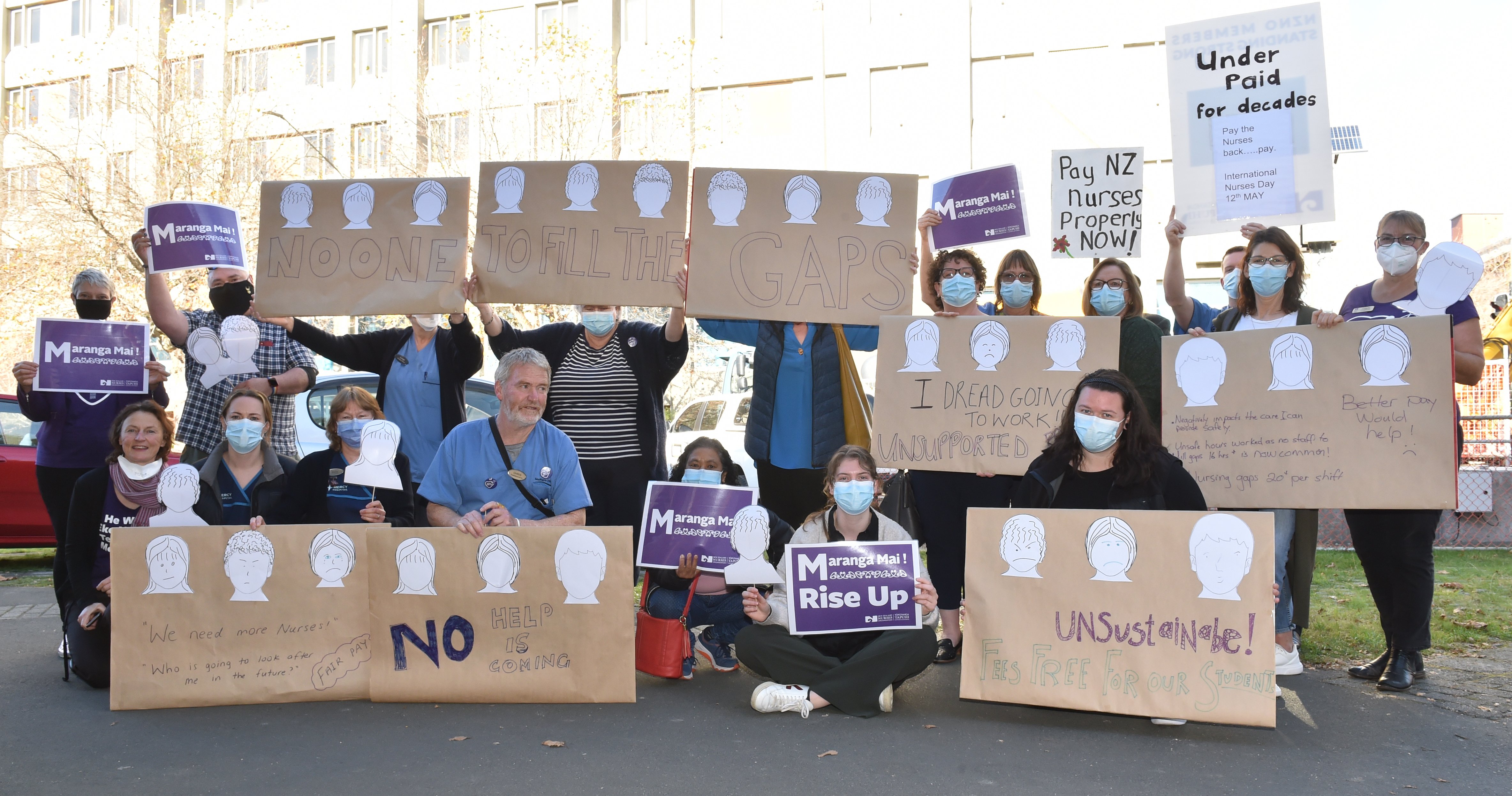 Dunedin New Zealand Nurses Organisation members take part in a national launch yesterday of a campaign to highlight the nursing shortage crisis across the whole health sector. PHOTO: GREGOR RICHARDSON
Nurses working in aged residential care have added their voices to those of their managers in calling on the Government for greater support for the sector.

Yesterday the Otago Daily Times highlighted a letter written by Birchleigh Residential Care Centre chief executive Malcolm Hendry and signed by more than 35 Otago and Southland aged care operators, which called on the Government to increase funding for the sector and pay its nurses at the same level as district health board nurses.

Nationally the aged residential care registered nurse workforce is 20% below capacity, and in the south at least 50 beds have had to be closed due to staffing woes.

Several nurses contacted the ODT yesterday to back their managers’ stand.

One said nurses had to be rostered on if possible, and in her facility some routinely had to work overtime, up to as many as 80 hours.

"We are working longer hours because we have to support our care staff," the nurse said.

"There is a lot of things that need to be done and they aren’t getting done."

Another nurse said the funding problem had been building for 15 years and the industry reliance on overseas-trained staff rather than New Zealand-trained nurses was starting to bite due to Covid-19.

"A lot of younger staff won’t come in to aged care because they don’t feel supported, and the harder we have to work the less support we can give them."

Ultimately, residents could end up suffering, despite the best efforts of nurses, another said.

"Decades of poor planning, inadequate funding and outright neglect have led us to a time of absolute crisis in terms of pay, staffing resources and morale across the nursing sector," NZNO chief executive Paul Goulter said.

Montecillo Home and Hospital has added its voice to the many calling for greater support.

Montecillo trust chairman David More said there was clearly an ongoing crisis with funding staff which was severely affecting retention.

"It is only because of our charitable status and the fact that we do not have to return a profit that we are able to keep operating."

The Montecillo trust and its predecessors had cared for veterans since 1918, Mr More said.

"It would be both a tragedy and an indictment on the present government if the fruits of the generosity of our forebears, who raised the funds for the original Red Cross Home and Hospital, were to finally fail."