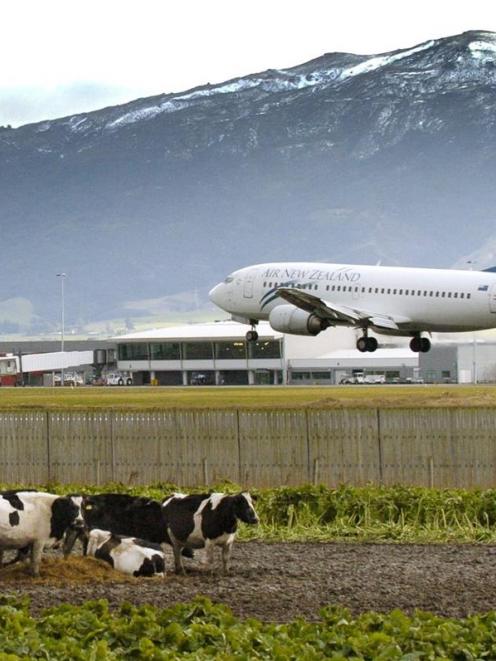 Cows graze next to Dunedin airport. Photo by Gerard O'Brien.
The white gold is flowing at Dunedin International Airport, with its dairying operation contributing a record amount to its bottom line in the past financial year.

Airport chief executive John McCall said 550-600 cows were run on two stretches of airport-owned land either side of the runway Profit from the cows represented a significant slice of the airport's overall turnover.

The dairying operation made a record return of almost $2 million in the past financial year, Mr McCall said.

The two separate farms were run as a 50/50 sharemilking operation, with two sharemilkers taking half the payout from about 220,000kg of milk solids produced and the airport taking the other half.

This meant grazing cows contributed up to $1 million of the airport's annual turnover of about $12.5 million.

''It has been a very successful year for us in terms of production ... the dairy payout was very good for this last season.

''Of course, it's taken a bit of a dive coming into this new season.''

It was normal for airports to own ''strategically important'' adjacent land.

But, ''it would be fair to say that there are not many airports in New Zealand that are on prime dairy farming land as Dunedin Airport is'', Mr McCall said.

The airport had always owned land for farming, but in the past it was leased.

In the early 1990s the airport bought an extra stretch of land for a possible runway extension and when leases ran out on other land it owned in the mid-1990s it shifted to a sharemilking arrangement.

This meant the airport had ''farm management'' responsibilities, including maintenance costs.

There had never been an issue with cows from the airport's farms, but ''many years ago'' a cow from another farm made it on to the runway.

Electric and security fencing meant the chance of a recurrence was ''extremely remote''.

Being situated in a dairy farming area meant passengers were sometimes confronted with the smell from brassica crops, silage and baleage.

While the smell was not to everyone's taste, Mr McCall recalled a royal visitor - possibly from the Netherlands - commenting on how ''lovely'' the smell was because it reminded her of home.

The aircraft noise had no effect on cows or their milk.