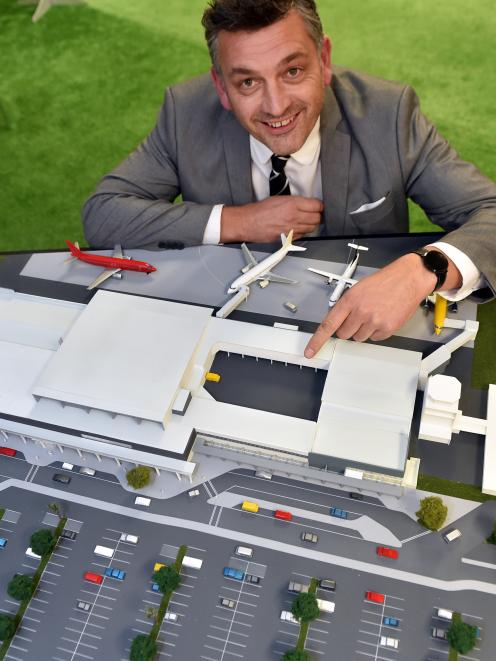 Work will begin next month on the project that will fill an empty space in the centre of the terminal, an area passengers do not usually see.

The project is needed after the increasing numbers meant there was an "unacceptable" lack of room in the departure lounge and long queues through the terminal.

Airport chief executive Richard Roberts said the extension would be on the first floor only.

It would triple the floor area of the departure lounge and more than double the security screening area.

He said the project was expected to be finished by the end of next year.

It would be "quite complicated" in terms of effects on passengers, but the airport would keep the public informed.

Mr Roberts said the airport had experienced "significant growth", particularly over the last three years, meaning the building had been under significant pressure.

A process of design was begun, as well as consultation with airlines, something required under the Airport Authorities Act.

Those processes were completed, and "we have a project on our hands".

Tenders were out for concrete and steel work this week.

Mr Roberts said once the project was complete, passengers would have facilities "which should be expected by any customer in any facility".

"It's going to be a pretty cool space.

"At the moment it is not acceptable, and it hasn't been for a while."

The airport had been planning the project as quickly as it could, but there were "a lot of hurdles to jump".

Mr Roberts said the project had been designed to keep up with growth until about 2026.

Construction should start in mid-October but by early 2019 the work will be more obvious.

How about runway extention? It was announced few years ago, but forgotten since. Short runway is a real brake for airport progress.

I was just coming on here to say the same thing!
For another good reason to extend the runway, take the Pink concert last week. Because our runway is too short, their cargo planes couldn't land here, instead having to send a whole heap of trucks down here with the whole setup. This wasn't the first band this has happened to, and probably won't be the last.

It goes without saying that the production would have preferred to have a much shorter trip from Dunedin Airport instead.
And maybe with a decent runway expansion, we can put the 'International' back into Dunedin Airport.

ODT, please ask this on our behalf, because we always get ignored!

yes, a longer runway is needed. One airline recently looked at flying into DUD with an A330(widebody). Although the runway at 1900 metres can technically take an A330, the airline concerned said it would not fly in, unless the runway was lengthened.

The airline in question, was looking at doing up to 3 flights a week, from Australian ports. The beauty of a widebodies jet, is that it could carry twice the number of passengers that the current Virgin 737-800s could, so the economy of scale would work in their favour.

Why would they want to fly in up to 3 times a week ? Proximity to Queenstown(ZQN). Queenstown has congestion & weather problems & many delays & diversions especially in winter. Many Australians used to fly into DUD when flights arrives at 3pm from Brisbane(BNE) & went back to BNE at 4pm but the current timings arriving around midnight, means that virtually no Australians heading to Queenstown, will fly into DUD & drive from there. Car hire is even cheaper at DUD than ZQN. Some Australians fly into Christchurch(CHC) & drive to ZQN, but that's a long drive.