Akatore Fault may be ‘serious hazard’ 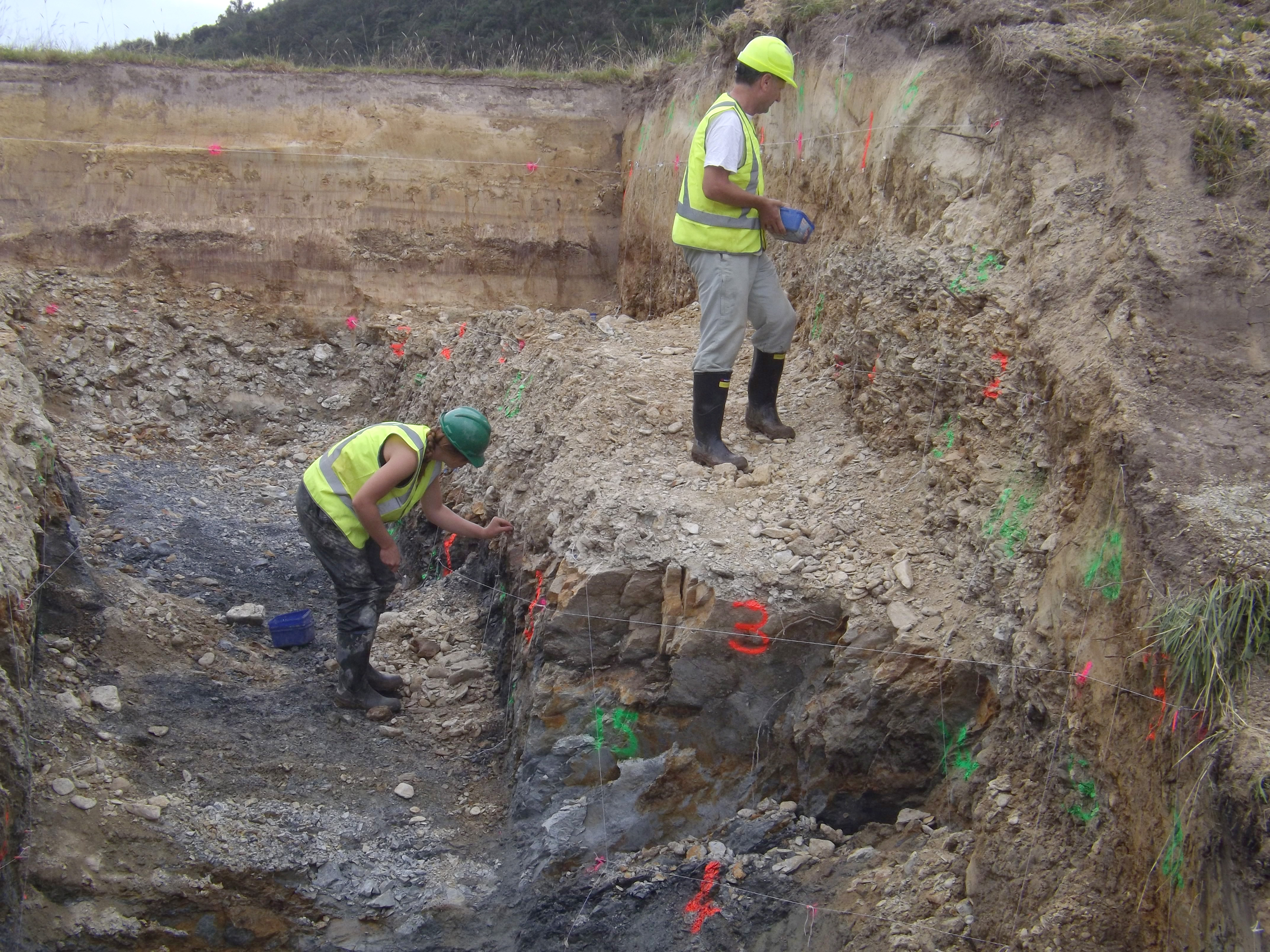 Master of science student Briar Taylor-Silva (left) and Prof Mark Stirling research the Akatore Fault at Big Creek, east of Milton. Photo: supplied.
A fault line on Dunedin’s doorstep could cause an earthquake as destructive as 2010’s Canterbury quake.

Researchers from the University of Otago’s department of geology and GNS Science have been studying the recent geological history and movements of the Akatore Fault.

The fault runs for about 20km onshore, between about Taieri Mouth and Toko Mouth, and possibly more than 40km just offshore further north and south, though its precise length is not yet known.

The researchers, led by Prof Mark Stirling, dug trenches near Milton and found the fault had behaved strangely during the past 125,000 years.

This was worrying when it came to assessing the earthquake hazard it posed to residents in Dunedin and its surrounds.

The researchers found signs of three significant earthquakes on the fault in the past 12,000 years, followed by a long quiet spell possibly stretching back about 125,000 years further.

It was estimated the three quakes had magnitudes of between 6.8 and 7.4 and each displaced the ground by up to 2m vertically.

The first occurred sometime between 12,100 and 1280 years ago and the next two occurred "very close together, geologically speaking", between about 1280 and 760 years ago, Prof Stirling said.

Prof Stirling said it was uncertain whether the three quakes had removed the potential energy from the fault line or it was still in an active phase and more quakes were likely.

More research was being done to try to answer this question, he said.

If it was still in an active phase, the fault, the most dangerous in the Dunedin area, could cause strong shaking for up to 30 seconds and serious damage to some of the city’s  buildings.

A good comparison was the 2010 Canterbury 7.1 magnitude earthquake, which despite being centred 40km from Christchurch, still caused significant damage in the centre of the city.

"That’s the sort of scenario that you could be looking at for an Akatore Fault earthquake."

Researchers were also investigating whether the fault travelled to near the mouth of Kaikorai Stream, which would bring it much closer to Dunedin and increase the risk.

"That’s only 10km from downtown and that might as well be 0km."

Master of science student Briar Taylor-Silva said the episodic nature of the fault made it difficult to estimate future earthquake hazards.

"With faults that have periodic ruptures, we can estimate how often an earthquake may be likely to occur — say, every x years — but we can’t do that for the Akatore Fault very well.

"It’s quite worrying for assessing the hazard the fault poses because we can’t say there won’t be another earthquake in the near future, as we don’t really understand its behaviour," Ms Taylor-Silva  said.

Despite the unanswered questions, the fault should be treated as a "serious hazard".

The researchers’ fieldwork included digging a trench across the fault at Big Creek, east of Milton, near Akatore Forest, and a second one at Rocky Valley Stream. The trench sites were chosen because the streams there were dammed by fault ruptures and became swampy.

Organic material from these swampy sediments deposited after the  quakes was then carbon-dated to calculate approximate dates for the events.