Albatross chick in need of a name 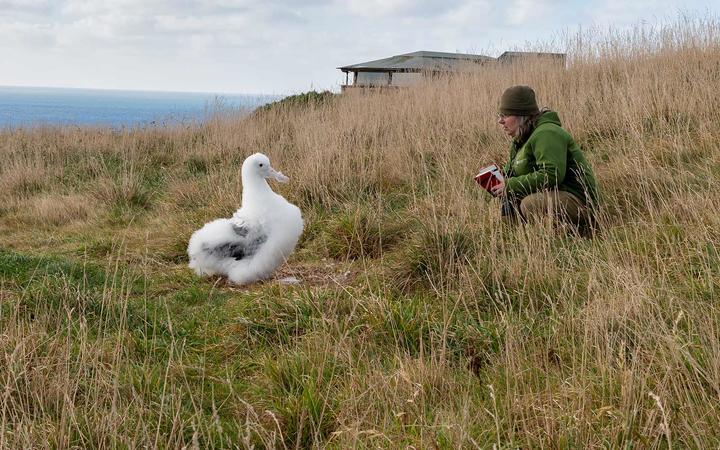 Department of Conservation ranger Sharyn Broni with Royal Cam chick. Photo: DOC
A toroa/northern royal albatross chick that gained a global audience via livestream is in need of a name before she takes flight.

The bird has been viewed at least 1.6 million times since hatching in January at Otago's Pukekura/Taiaroa Head.

The Department of Conservation (DOC) is this week running a competition to name the toroa before she fledges in September and flies 9000km across the Pacific Ocean to feed near South America.

People from 51 countries have watched the chick around the clock as she's been cared for by her devoted parents and grown from a round fluffball to a 9kg adolescent, DOC biodiversity ranger Sharyn Broni said.

The Covid-19 lockdown saw a big jump in people watching and commenting.

"The chick's dad went missing for over a month and viewers were very worried. Luckily, he finally returned, slightly injured, to resume feeding the chick and viewers were overjoyed," Broni said.

The northern royal albatross face a range of threats and challenges including the effect of fishing and plastic and the growing impact of climate change on ocean temperatures and feeding grounds.

The competition theme is celebrating connections, which DOC says is fitting for a chick that has attracted an international audience.

The competition closes on Sunday August 2 at 11.59pm and a shortlist of five names will go to a public vote on August 19.