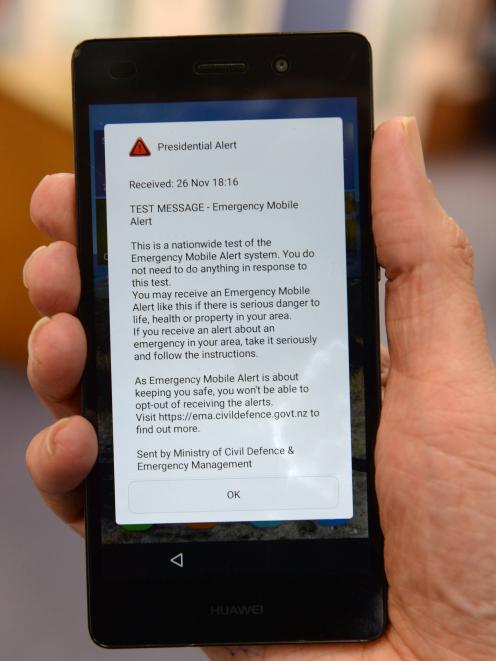 The alert. Photo: Linda Robertson
Yesterday's nationwide mobile phone test of a new emergency alert system was "a bit hit and miss" in Dunedin and Otago, but was  still valuable, Civil Defence says.

Emergency Management Otago director Chris Hawker said some people had received the alert,  but many others had not.

"It was a bit hit and miss, but we just need to improve the hits," Mr Hawker said.

"It will get better."

It had earlier been estimated  about 30% of people would be able to receive the  alert  — a written message, accompanied by a loud noise — but some older cellphones would not be capable of receiving it.

As people bought new phones and updated older models, it was hoped about 80% of cellphone users  would  receive the alerts.

Asked if  less than 30% of cellphones had received the messages in Dunedin and Otago, during the hour-long national test, starting at 6pm, he said full information was not yet available.

"Technical people" would be investigating why more phones had not received the alert, and people could add to the value of the exercise by providing feedback about the alert.

The test was to have happened next April under a contract with the technology’s developers in the Netherlands.

However, it   was brought forward after the public was confused by conflicting information about tsunami risks after the Kaikoura earthquake last November.

The public was advised to "check whether your phone is capable and updated" and give feedback at www.civildefence.govt.nz/emergency-Mobile-Alert. In the Otago Daily Times Dunedin editorial office last night, two out of 12 people —  using a range of older and newer-model cellphones — received a cellphone alert. Another Dunedin resident received three separate alerts, the first at 6.16pm.

The test message, displayed on a mobile phone, reminds the phone user that "this is a nationwide test of the Emergency Mobile Alert system", which was about "keeping you safe".

No action was required on this occasion, but if a future alert was issued, because of "serious danger to life, health or property in your area", phone owners were urged to "take it seriously and follow the instructions", the message read.