All they want for Christmas is to share it 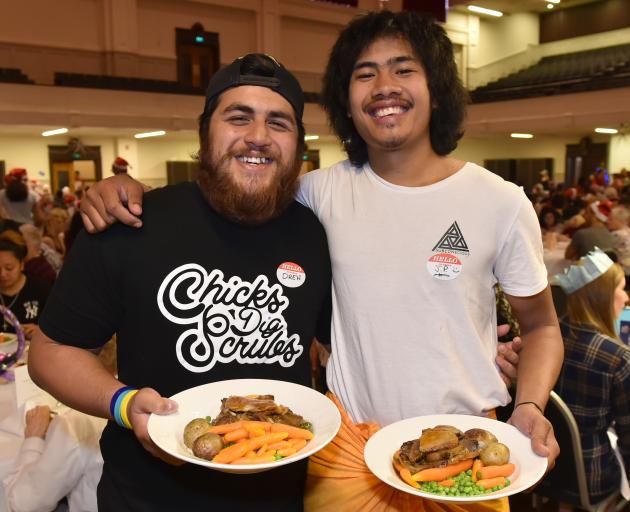 Along with their flatmates, students Drew Chu Shing and J.P. Tuuau decided the best way to spend their first Christmas away from home was at the Dunedin Community Christmas Dinner in the town hall yesterday.

The pair were looking forward to tucking into their meal of minted peas, carrots, potatoes and roast hogget with gravy.

''Being away from home, especially on Christmas, can be quite lonely, but sharing it with so many other people is awesome,'' Mr Chu Shing said.

As well as a hearty meal, the crowd of about 600 enjoyed music and carols.

Community Christmas lunch co-ordinator Grant Hardy said nearly 600 meals had been prepared for the lunch, including 60kg of minted peas, 120kg of potatoes and 130kg of meat.

It took about three days to prepare all the food, Mr Hardy said. Military precision and the hard work of about 150 volunteers was required to make sure everything came together.

''It's great to see we've had a big rush of people today, people of all nationalities. It's great and really what we are all about.''

Once the lunch had been cleaned up and the hall packed away, his thoughts would turn to next year's lunch, he said.