Amphibious caravan to float your boat

By Mike Houlahan
0 Comments
It was not quite a maiden voyage, but boat-builder Adrian Rongen was a happy man on Saturday when his new ARVee made it on to Lake Waihola.

The vessel, essentially a floating caravan, is believed to be a novel design in this country and has been 14 years in the dreaming and thinking. Construction began last October.

"We only went about 5m and tied up to the jetty because it was a wee bit blowy," Mr Rongen said on Saturday.

"I had enough stress for the past few days just getting it in the water, so I just wanted to sit down and drink some Champagne, feeling quite relieved."

Built by Payne’s Aluminium Mosgiel, the ARVee is about 10m long overall, including engines.

It has two keels.

"It is flat-bottomed and quite large, so it’s a very stable design," Mr Rongen said.

"There has been speculation about whether it will plane or not with two 50hp engines." 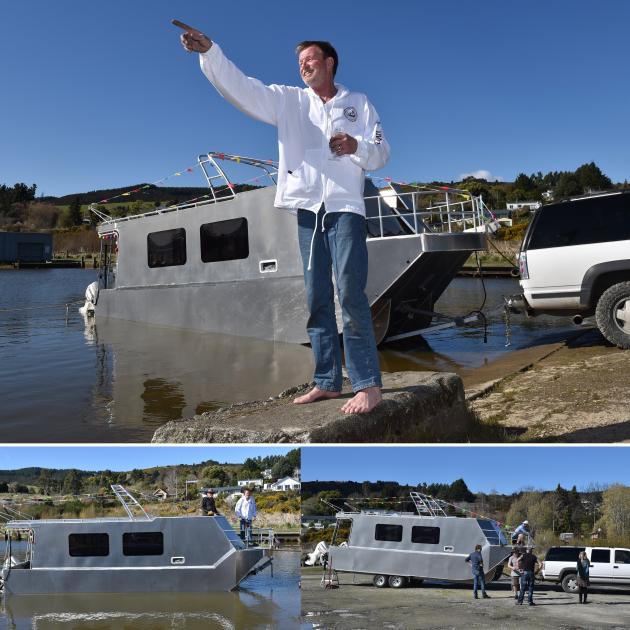 Adrian Rongen and his aquatic caravan take to the water at Lake Waihola on Saturday. PHOTO: GREGOR RICHARDSON
The caravan part of the vessel will have four berths, including a full-sized queen bed, a galley, a shower and toilet.

The internal layout is flexible.

To continue to qualify as a road vehicle, the ARVee has been built to be under 3.5tonnes.

"It’s floating and I’m very happy with it. It’s been a long saga to get to this point," Mr Rongen said.

"We chose Waihola because people said it’s only three feet deep, so we weren't going to sink too far."

Should it pass its sailing trials, its interior will be fully kitted out and the vessel then taken to Wanaka.

"I would like to take it on a tour of New Zealand, visiting all the major waterways," Mr Rongen said.

"If successful, we will take it to the USA and we have the Great Loop [from Florida, north along the Mississippi to the Great Lakes, then down the eastern seaboard] in mind, as well as a number of other waterways."

The vessel was still a work in progress.