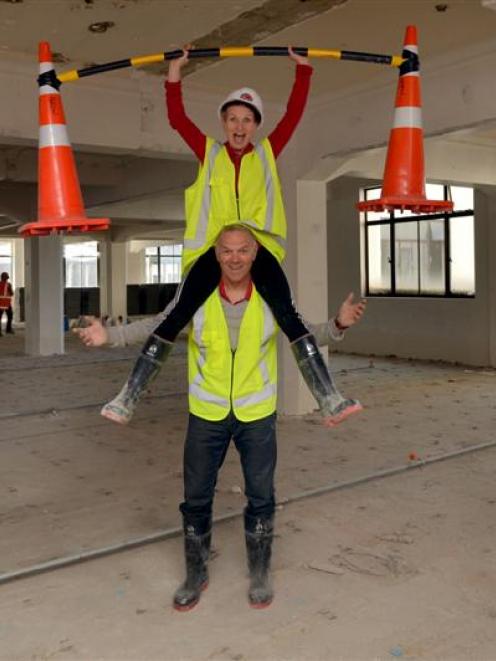 Cindy Bradburn and Jacques Villard, of Multipeak Health and Fitness, will be moving from the ground floor at John Wickliffe House to the second floor of the former chief post office building next April. Photo by Stephen Jaquiery.
Activity at Dunedin's former chief post office is about to increase with another major tenant this week confirming a move into the building.

Multipeak Health and Fitness will occupy two-thirds of the second floor, giving its co-owners, Cindy Bradburn and Jacques Villard, 600sq m of space for their facility, which is open 24 hours a day.

The business was formerly based at Consultancy House in the Exchange, and more recently made a temporary move to the ground floor at John Wickliffe House.

''Our business was fragmented. This [the former chief post office] is going to flow much better for our clients because it's all going to be in the one place.''

Mr Villard said Multipeak would be ''a one-stop-shop''. It would have the usual gym equipment with three personal trainers as well as a physiotherapy clinic with three physiotherapists, an osteopath and a massage therapist.

''We are a health and fitness club with a focus on rehabilitation and wellbeing.''

He said Multipeak Fitness had a unique and innovative approach to rehabilitation, incorporating treatments with either Pilates, aquafitness, massage therapy and home- or gym-based programmes. Clients were most commonly people who had had hip, knee or shoulder replacements, joint and sport injuries, neck and back care needs, high blood pressure, weight loss problems and even recent surgery, he said.

For Ms Bradburn, the excitement is growing as moving day comes closer.

''It's very exciting - it's an opportunity of a lifetime.

''I've always dreamed of having a club in a beautiful and stylish building.

''The views are stunning. It's a light and vibrant area, and the building will be a hive of activity.

''This is an investment in our long-term future.''

The couple signed the lease this week, and hope the site will be ready to move into by April next year.

Arrow International Southern director Nick Hamlin said agreement on a tenant for the remainder of the vacant floor space was still being finalised and it was hoped an announcement could be made soon.

About 40 contractors are on site, working mainly on the ''base-build'' for the commercial office space on the ground, first and second floors.

The work is expected to be completed by the end of the year, when Silver Fern Farms will begin fitting out the ground and first floors before the opening of its offices in March.

Following the completion of the commercial tenancy build, work will begin on converting the remaining floors into the four-star-plus Distinction Dunedin Hotel - a 120-apartment hotel - and a three-level car park across the road on Bond St.

The multimillion-dollar transformation is on schedule to be completed by the end of next year.