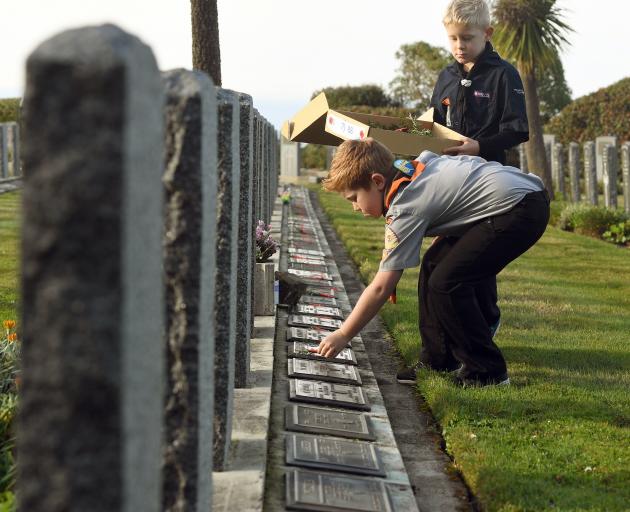 Laying posies on the graves of fallen soldiers at the Andersons Bay Cemetery are Felix Cowan (left) and David Mogensen (both 7), both of Dunedin. PHOTO: STEPHEN JAQUIERY
Looking at Anzac Day services from the other side of the fence has been a very moving experience for a Swedish couple now living in Dunedin.

Asa and Stefan Mogensen brought their family to Dunedin from near Stockholm six months ago, so Mr Mogensen could work as an anaesthetist at Dunedin Hospital.

"We also wanted to explore New Zealand because we've heard so many nice things about the country - the lifestyle and the friendly people," Mr Mogensen said.

His family was immersing themselves in Kiwi culture, and had been looking forward to Anzac Day because it was a time when everyone stopped what they were doing and came together to remember those who fought for their beloved country, he said.

So much so, he went straight from a night shift at the hospital, picked up his family and took them to the Anzac ceremony at the Andersons Bay Cemetery.

Mrs Mogensen said it was a moving experience.

"We don't have anything like this in Sweden, since we were not in World War 1 or World War 2. Sweden has been at peace for 200 years.

"So this is a very new experience to us and we wanted to honour it.

"It's an honour to be here, but from our perspective it was also very interesting to see.

"It is amazing to see so many people paying their respects, the culture of the event and how sad the background is.

"It was very emotional."

Not satisfied to just watch, their son and daughter helped lay posies on the graves of fallen soldiers at the Andersons Bay Cemetery yesterday.

They were among about 400 people who attended the Anzac Day service.