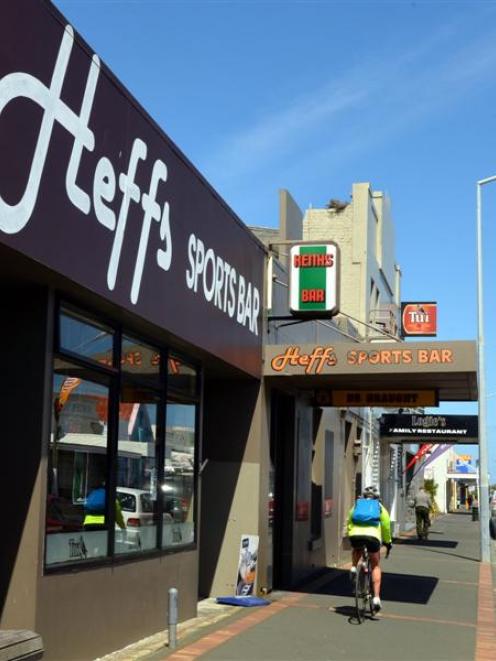 Heffs Hotel. Photo by ODT.
The ''appalling'' aggravated alcohol abuse at Heffs Hotel is behind a Liquor Licensing Authority order for the South Dunedin premises to be temporarily closed for part of this week.

The authority suspended Heffs' on-licence for three days from 7am tomorrow.

It said since the on-licence was issued in October 2011, the licensee failed to take appropriate steps to reduce liquor abuse in the premises, and liquor abuse had been aggravated.

Licensee Patricia Clark (73), of Dunedin, was the sole director of PC Bar Ltd. Her son and Heffs operating manager Stephen Clark was the sole shareholder.

Ms Matheson was convicted last year of breaching the Sale of Liquor Act 1989, as she was the duty manager at Heffs when it hosted the wake of a former Mongrel Mob Notorious member, during which police were called to a gang-related brawl involving more than 50 people.

Mr Clark was off-duty and drinking alcohol at the function. His mother and Ms Matheson were in charge.

Yesterday, Mr Clark said the temporary suspension of his and Ms Matheson's certificates meant he would have to employ others to be the duty manager.

His certificate was suspended from January 21 and Ms Matheson's from February 4.

Mr Clark was not happy about the authority's ruling, but said it could have been worse given what the police wanted.

Dunedin police alcohol harm reduction officer Sergeant Ian Paulin applied to the authority for Heffs' on-licence to be cancelled and the manager's certificates of Mr Clark and Ms Matheson to be suspended.

Mr Clark denied Heffs was a troublesome spot and said its bad reputation was a thing of the past.

''We haven't had a fight here in 12 months. It's a very well run operation. We've got no faults here at all. The bar has been cleaned up. It's just the police are picky. They come in and look for any small reason.''

Mr Clark applied for the renewal of Heffs' on-licence in November, when he said the licence expired.

He said that application was delayed pending the authority's decision on other applications, and he was waiting to hear whether the on-licence would be renewed.

In its most recent written decision dated last December 21, the authority hinted that any issues at Heffs should be dealt with before a renewal decision.

The authority concluded Heffs breached the Sale of Liquor Act 1989 at least five times in a six-month period last year, despite several warnings and interventions by Sgt Paulin.

It said the licensee ''failed dismally'' to meet obligations and was not in control.

''It is the expectation of the authority that the performance of each manager will improve markedly during the renewed period,'' it said.