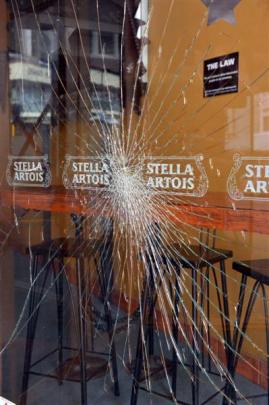 A window was smashed at the Isis bar in Princes St after the death of a Dunedin man in an Octagon bar. 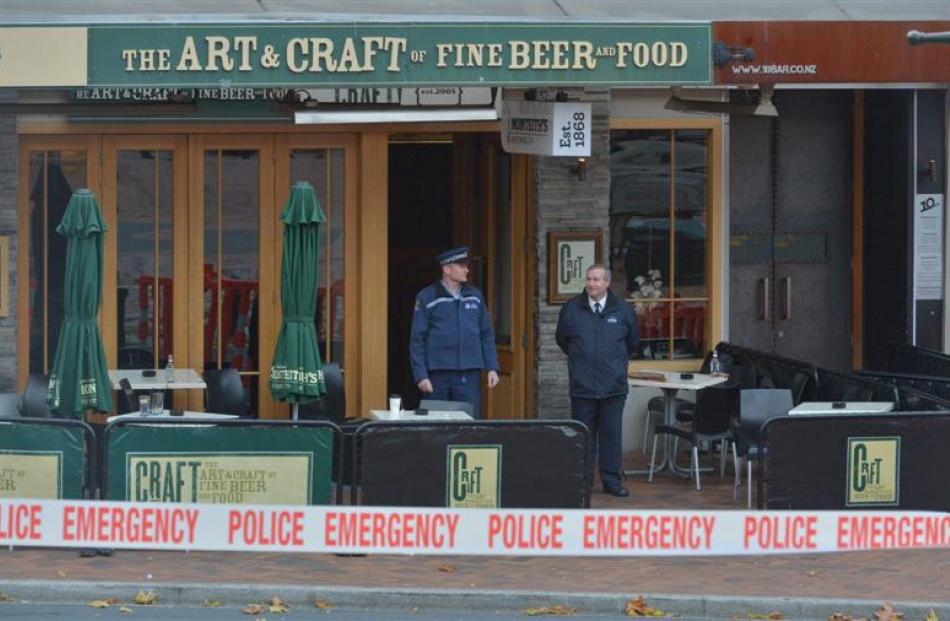 A police officer and a security officer stand outside a cordoned-off Craft Bar in the Octagon yesterday morning. Photos by Gerard O'Brien.

Police have charged a person following the death of a Dunedin man in an inner-city bar yesterday.

A 35-year-old man was found unconscious in the toilets of the Craft Bar in the Octagon, Dunedin, about 1.40am yesterday.

Efforts to revive him at the scene were unsuccessful, a St John spokesman said.

Detective Senior Sergeant Kallum Croudis confirmed a 25-year-old man had been charged with assault. The man is due to appear in the Dunedin District Court today.

The victim's name would not be released until their next of kin had been notified.

A weapon was not being sought in connection with the man's death.

At the time of the incident the alleged assailant is believed to have removed his shirt before leaving the bar with his two friends.

Police wanted to speak to his two associates - aged in their 30s or 40s with one sporting a mohawk hairstyle and the other having a shaved head.

Both men were wearing jeans and dark casual clothing.

After the assault, the trio left the bar, which had about 60 patrons, and were involved in an altercation outside the Isis bar in Princes St, where a large window was smashed, Dunedin Clutha Waitaki relieving area commander Inspector Jason Guthrie said.

Police did not believe there was any interaction between the victim and other patrons at the bar before the incident, and were yet to determine whether the victim was known to his assailant.

He confirmed CCTV footage was being used by police in their inquiries.

The bar was operating according to its licence and had been visited by police foot patrols earlier that night.

''The atmosphere was good-natured and friendly when police visited,'' he said.

Phil Ellis, owner of the Craft Bar, which was cordoned off yesterday, declined to talk about the incident.

Police were appealing for any sightings of the trio - particularly of the shirtless man spotted in the Octagon - around the time of the incident.