Arthur ‘on tenterhooks’ in face of advancing fire

It's a terrifying case of wait and see.

Former Otago rugby player and opera singer Jud Arthur has been on his porch most nights this week, keeping a close eye on an approaching fire front, waiting to see if his home near Bundanoon, Australia will be ravaged by bushfires. 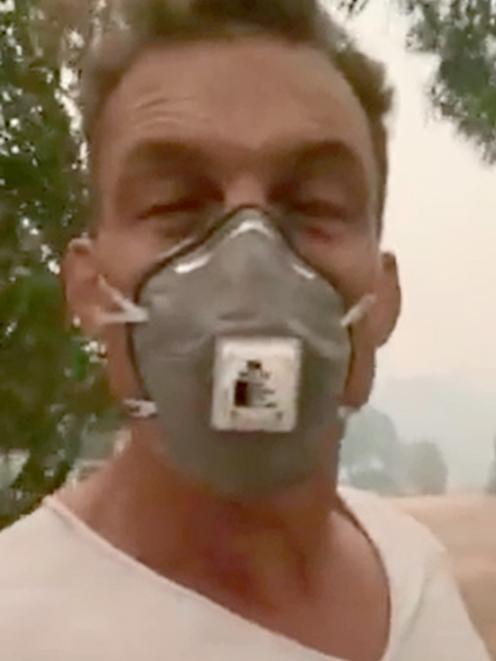 Former Otago rugby player and opera singer Jud Arthur outside his house near Bundanoon, Australia, which is being threatened by bushfires. Photo: Supplied
‘‘When you’re sitting outside all night with the smoke and that orange glow in the sky, and you hear the sounds of fire engines in the background and you’re waiting for the wind to change and the fires to be on your property — it’s just the waiting and the anticipation.

‘‘It’s the unknown. It’s thinking back to stories about the fire front just sweeping over people and killing them with that intense heat.

‘‘It’s the anticipation of something that is very frightening and you really are on tenterhooks.

‘‘It’s such an unpredictable beast, and man, it’s raging in Australia at the moment.’’

Mr Arthur lives on a 43ha farm about 90 minutes south of Sydney, where a major fire front is just 5km away.

‘‘There’s quite a big front in the Penrose area, south of us.

‘‘Firefighters are doing their absolute best to stop it from reaching the Penrose State Forest, because if it gets in there, it will cut off the main arterial route ... my only escape route now.’’

The fires spread to Bundanoon earlier this week — his only other escape route — and all residents were evacuated.

So he decided it was time to evacuate his horses and family to a safer area near Sydney.

He then returned to his house to defend it against the fire.

He has a fire pump attached to a large water tank on his property, which allows him to fight fires for up to five hours.

He also has water sprinklers on the roof of his house and sheds which can stop flying embers from setting his buildings on fire.

He had spent much of the past two weeks clearing gutters and picking up gum tree leaves and bark.

‘‘Fuel reduction around your property is the best thing you can do, just to try and minimise the risk of spot fires getting going.

‘‘It’s a very hazy grey sky with a little bit of blue sky in patches. You can taste the smoke.

‘‘It does get very thick and smoky at stages and it’s very hard to breathe.’’

He said he had been wearing a face mask to protect himself from the smoke.

Despite some experience fighting forest fires in New Zealand, he said there was a limit to how long he would stay in the path of danger.

He left his property the day after he evacuated his family because it appeared the fire was going to cut his last escape route.

‘‘So I just gathered up the chooks, turned on the sprinklers and left.

‘‘When I came back the next day, fortunately the property was still OK.

‘‘It’s amazing how it puts things in perspective, I have to say. I’m really grateful that we still have what we have.’’

‘‘Today is supposed to be an ember attack day. It’s very windy and it’s going to be 36-40degC — those are the sort of days that you’ve got to be on high alert to stop any spot fires.

‘‘Until the rains come and put it out, it’s nigh on impossible for the firies to put all these big fronts out.’’