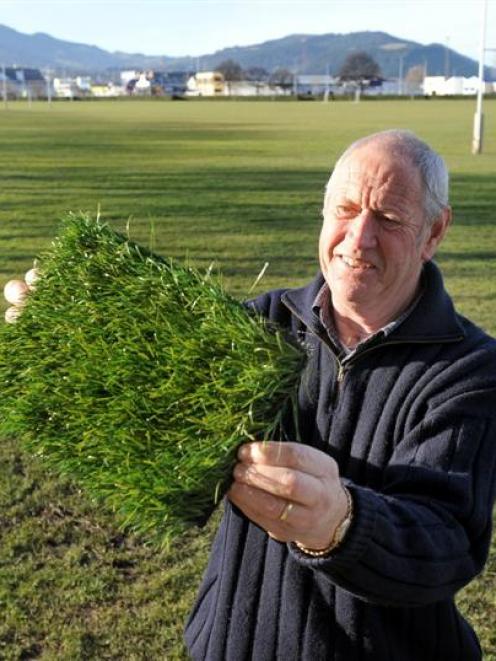 Dunedin City Council sports fields facilities officer Harold Driver displays a sample of artificial turf, which could be used to ease weather problems at grounds such as the Oval (pictured). Photo by Stephen Jaquiery.
The days of dirty knees and mud puddles on Dunedin's sports fields could be numbered, as the Dunedin City Council considers a switch to artificial turf.

Council staff confirmed this week they were considering using artificial playing fields at grounds such as Logan Park or the Oval, as an alternative to grass rugby and football fields.

Some of the city's grass fields were prone to flooding in winter, which this year has seen the cancellation of 371 junior, secondary school and senior football and rugby fixtures.

Council community and recreation services general manager Mick Reece said a switch to artificial turf could lead to sports being played on fewer fields, freeing up other fields for other recreational uses.

The artificial surfaces would cost up to $900,000 each to install, but would ease weather disruption and save the council money in the long term, by reducing the $2 million each year spent maintaining 52 rugby and 54 football fields.

An example was Otago Hockey's success in using two artificial playing surfaces at the McMillan Centre, at Logan Park, instead of up to 15 grass playing fields, Mr Reece said.

"Once you have got an artificial field, like hockey has already proved, you can go 24/7. That's a huge advantage," he said.

Mr Reece said any change was likely to be several years away, following talks with clubs and other groups and consultation through the annual plan process, but there appeared to be "huge advantages".

"It's consistent, it's reliable and it's not weather-dependent . . . it has to be part of our planning for the future. It's part of the thinking now."

Otago Hockey chief executive Chris Aubin said he supported the move, as the installation of two artificial fields at the McMillan Centre had been "in a word, brilliant".

The new surfaces allowed for constant use - restricted only by a 10pm limit on the centre's floodlights - and the council would save money in the longer term, he said. The turf could be replaced every 12 years for less than half the installation cost.

Club rugby and football players desperate for dry practice pitches during May had also used the McMillan Centre for training this winter, demonstrating their durability, he said.

However, University A coach John Leslie - who earlier this month criticised the council for closing grounds because of wet weather - was more cautious.

He had heard largely positive reports about the College Rifles club's artificial fields, but questioned the need in Dunedin.

"I think we are pretty good here, really. We certainly don't have as much rainfall as Auckland. We don't need to get too prissy about it."

Mr Driver said it would be difficult to spot the difference between the latest artificial turf and real grass until standing on the fake surface.

"If you drove past, you could not tell the difference," he said.

Artificial turf had been shown to reduce ankle and other injuries by providing a firmer playing surface, he said.

Mr Reece said any savings could be used to develop better facilities at the city's most popular sports grounds, such as Logan Park.

The Oval was one ground that could benefit from artificial fields, as its high water table made it prone to flooding and cancellations, he said.

He believed the move would have the support of most clubs and sports field users.

"Ten years ago, artificial cricket wickets were very pooh-poohed... now, they are just part of the action.

"I don't think there will be many sports [clubs] who haven't already thought of it... They are actively looking for alternatives to mud."

• Dunedin City Council considering artificial turf to replace grass rugby and football fields.
• Cost of up to $900,000 for each playing field, but savings in council maintenance expected.
• Any switch aims to prevent weather-related cancellations; 371 football and rugby matches abandoned so far this winter.
• Any changes likely to be several years away at least.
• Discussions with clubs later this year; public consultation through annual plan.