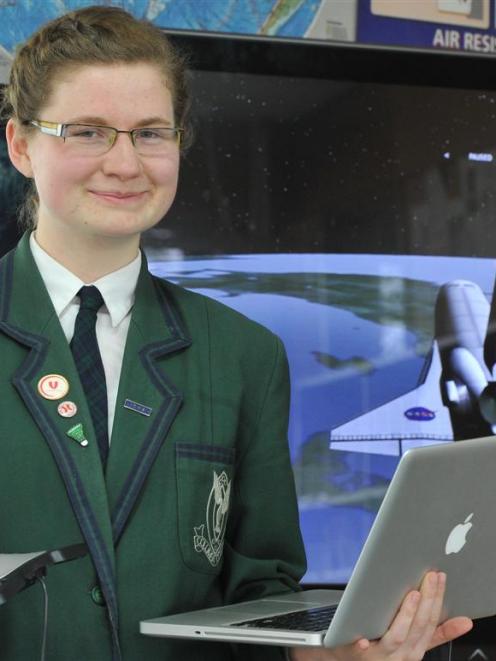 Columba College pupil Ailsa Carroll puts in some hours on the space shuttle flight simulator in preparation for her trip to the International Space Camp in Huntsville, Alabama, in July. Photo by Craig Baxter.
For most of her life, Ailsa Carroll has dreamed of one day becoming an astrophysicist or an astronaut.

That dream has become significantly more tangible since the 16-year-old Columba College pupil found out she is one of two New Zealand senior secondary school pupils selected by the Royal Society of New Zealand to attend the International Space Camp in Huntsville, Alabama, in July.

''It's been a very real dream for me to be an astrophysicist or an astronaut, and this will make it an achievable dream.''

Ailsa will be immersed in a programme designed to promote space science and exploration.

''Space seems to be the edge of what humans are capable of. I want to be a part of the front edge of technological development.''

Space camp activities will include astronaut training, as well as learning about the mental, emotional and physical demands astronauts must face.

She will also receive leadership training, experience four Gs of lift-off force and weightlessness in the space simulator.

Ailsa said she was most looking forward to taking the controls in the space shuttle flight simulator.

''I've had a smile on my face since I found out.

Ailsa was selected ahead of thousands of other pupils around the world because of her excellent academic results and her involvement in aeronautics (flying aircraft on computer flight simulators), robotics and computer programming.

During her time at the International Space Camp, she will be joined by more than 150 like-minded pupils from 23 different countries - including Burnside High School pupil Thomas Marsh (17), of Christchurch.

About 80% of her costs will be covered by the Talented School Students Travel Award, which is funded by the Ministry of Business, Innovation and Employment and administered by the Royal Society of New Zealand.